The introduction of wireless charging will greatly improve the uptake of electric vehicles (EVs) when introduced, as the technology will make it easier and more practical for drivers to feed power into their batteries.

The latest Autovista Group poll saw nearly a third (31%) of people suggest that the uptake of wireless charging will appeal to motorists considering the purchase of an EV. The technology would allow not just for an easy charge, with cars parked on pads that can send current to batteries, but would also remove the potential of street-clutter with wires trailing from charging point to EVs. 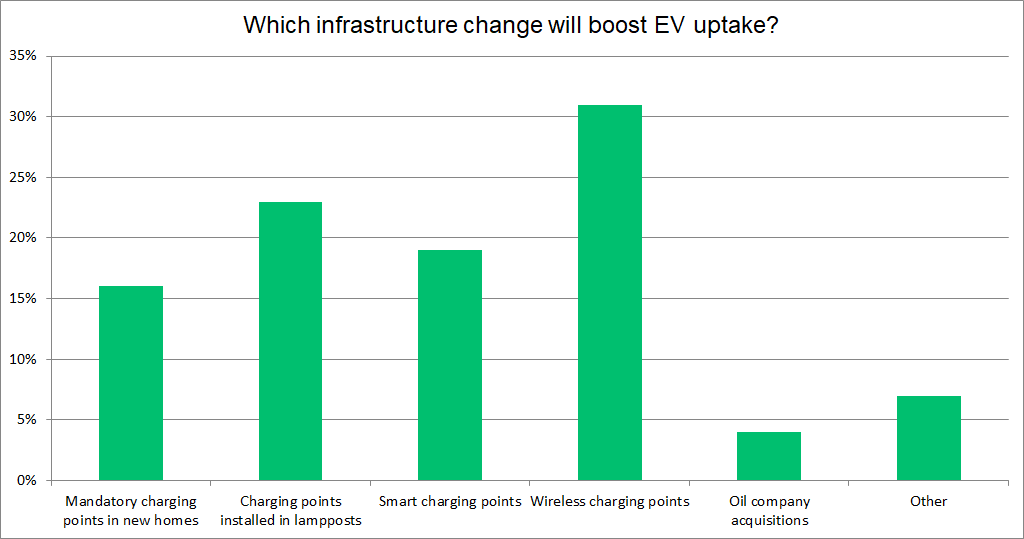 The technology would send electricity by magnetic induction between the transmitting coil on the ground and the receiving coil in the car. Toyota is currently testing the technology and earlier this month, the UK Government announced it would be funding the development of the technology to bring it closer to the public domain.

The system could even help to reduce range anxiety in the future, with roads laid with transmitting coils to power cars on the go. For now, however, the vehicle would remain motionless, parked on top of the power grid for maximum effect.

Just under a quarter (23%) of respondents to the poll felt that the infrastructure change that would boost EV uptake would be the installation of charging points in lampposts. This is an idea floated by the UK Government in its Road to Zero plans and would see the existing infrastructure of street lighting amended to provide power to cars parked alongside.

Such an idea would instantly boost the number of charging points in towns and cities. It would be imagined that the point itself would be set away from the post, possibly on the pavement close to the road rather than set back as such lighting often is. It is also unlikely that such chargers would be high capacity but they would benefit those who do not have off-street parking at their properties.

The idea is being adopted or amended in other European countries, with Finland considering plans to adapt heating poles to provide charge for electric cars as well. Making use of current infrastructures can give an instant boost to vehicle charging locations while also remaining cost-effective.

Following this, 19% of votes went towards the introduction of smart charging, another area the UK is investing in. Such technology will allow users to set times for charging and remotely control how much energy is being used. Smart charging will also mean drivers can avoid peak time use, which will benefit a country’s electricity grid by preventing surges and therefore problems associated with a rush of power in peak demand.

A study recently found that consumers typically charge at peak times for the electricity system (4pm-7pm) unless there is an incentive not to do so. These users prefer smart charging over simply plugging in and charging straight away, even if the saving from doing so is relatively low. Both user-managed and supplier-managed charging would be able to shift demand to later in the evening.

Close to smart charging in the results, the introduction of mandatory charging points in new homes polled 16%. Giving homeowners an opportunity to charge their vehicle, without the need to install such infrastructure themselves, would add an incentive and remove the argument that there is nowhere to charge an electric car.

The UK recently passed legislation that states all new-build homes would need a mandatory charging point, a world-first move that it believes will boost EV uptake. ‘It is clear there is an appetite for cleaner, greener transport,’ said (the now former) transport secretary Chris Grayling. ‘Home charging provides the most convenient and low-cost option for consumers; you can simply plug your car in to charge overnight as you would a mobile phone.’

The ‘other’ category garnered 7% of the vote. Some respondents said it was not down to infrastructure but that EVs need to be cheaper before their uptake increases, while others felt that more fast charging points along highways - and a mandate that states a minimum requirement for service stations - would be the best thing to help drivers make the switch.

Finally, 4% felt that oil company acquisitions would be the infrastructure boost that the industry needs, with some already getting involved in the technology – notably, BP’s purchase of Chargemaster and Shell’s involvement in the Ionity programme.