What will Geneva 2019 be remembered for?

What will Geneva 2019 be remembered for?

The Geneva International Motor Show opened its doors this week to press and public, amid a changing automotive landscape. 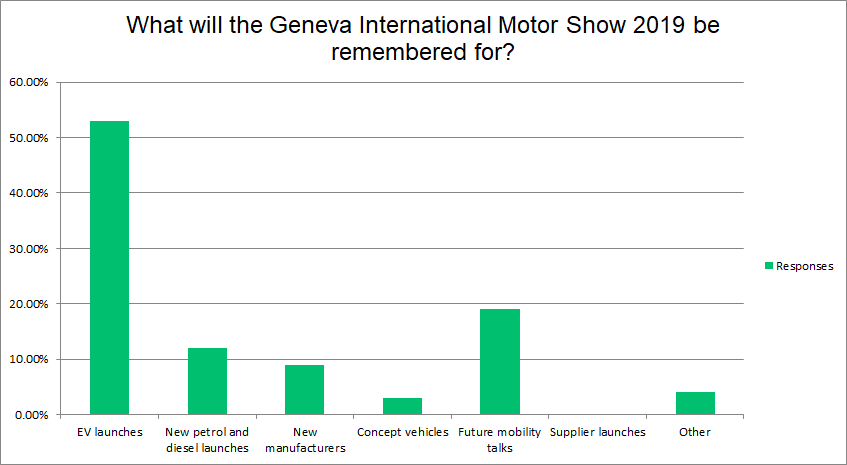 With this in mind, Autovista Group asked in its latest poll what the show would be most remembered for in 2019, with a range of options to cover some of the topics of interest being presented in the halls of the Palexpo.

The perhaps unsurprising winner of our most recent poll was the option of electric vehicle (EV) launches. This gathered just over half (53%) of the vote, highlighting the industry’s thinking over the challenges it is facing. EVs were unveiled by multiple brands at Geneva, with everything from city cars to supercars on display, all powered by volts, amps and watts. Additionally, there were announcements over future EV plans, including full fleet electrification and charging solutions. The Geneva show was a hive of electric activity in 2019.

Second in the poll but quite a way behind, with 19% of responses, was the Future of Mobility talks. A seminar program held alongside the show halls concentrated on the challenges facing the industry, and how it is changing, especially as regards the need for autonomous vehicle solutions. Additionally, within the halls themselves, many carmakers alluded to driverless technology being part of their plans. The seminars covered technology and research into the changing world of driving, with speeches and panel debates highlighting how connected and autonomous driving, together with car-sharing schemes and changing ownership patterns, are presenting more opportunities for carmakers.

A total of 12% chose the launch of new petrol and diesel models as being the potential stand-out from this year’s event. Despite the push for electric, there is still a large market for petrol vehicles, especially as EV technology still continues to grow and adapt. While launching cars that will debut in an increasing market is important, carmakers cannot simply stop developing petrol and diesel straight away, as it makes up the vast majority of their sales and the demand for such engines are still high.

Next, with 9% was the option of the debut of new manufacturers. Many of these were from China, a country that is rapidly developing EV technology and is looking to secure a strong foothold in Europe. BAIC, BYD and Lynk&Co were present in Geneva to give updates to their programs. NIO also appeared to showcase its EV ambitions and Aiways was another new Chinese company at the event. This competition from the east is another challenge the automotive market has to face in Europe; however, with many of these brands focusing on EVs, the battle is still a long way from being resolved.

The ’other’ category received 4% of votes, with everyone commenting on the same thing – absent manufacturers. Ford, Volvo, Jaguar Land Rover and Opel were not in attendance, while Hyundai was also a no-show – although the Korean company did take out advertising space in Geneva Airport, welcoming international visitors by reminding them that they could see the latest Hyundai models on the road rather than standing in a hall.

Finally, with 3% of the vote, concept vehicles were the next choice. These were around the halls in high numbers, but unlike some of the lavish and futuristic concepts, many were ‘near-production’ models, such as Alfa Romeo’s Tonale and Daimler’s EQV.

No respondents chose supplier launches as being the stand-out talking point in Geneva.