What will be the big talking points of 2019?

What will be the big talking points of 2019?

The new year has begun, and 2019 promises to throw up a lot of discussion points. The last twelve months has left a mark on the automotive industry, as diesel sales declined, electric vehicle production and development continued, and political matters came to the fore. 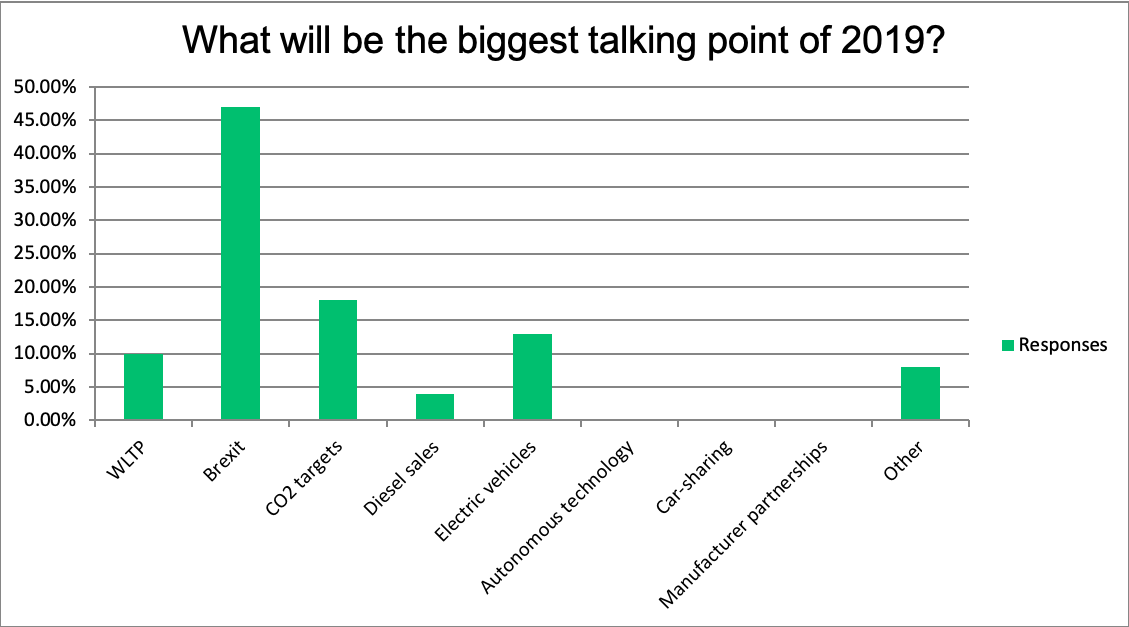 Autovista Group therefore asked in its latest survey what readers of its Daily News Brief and websites felt would be the biggest talking point in 2019.

In the final poll, a clear-cut winner was Brexit, with 47% of the vote. The UK will leave the European Union on 29 March, and since the referendum result in June 2016, car manufacturers and parts suppliers have been vocal on their need for a customs deal that will not hamper their production facilities in the country. With what can only be described as political turmoil over the current proposals, and with time running out to conclude any sort of deal, this is certainly going to be a subject that rumbles on, even after the deadline.

In second was the issue of CO2 targets with 18% of the vote. At the end of 2018, the European Commission announced strict targets for carmakers to achieve in 2025 and 2030, with reductions of 15% and 37.5% - based on 2021 figures of 95g/km – respectively. This places huge pressure on manufacturers who are struggling to meet the 2021 deadline due to the fall of the diesel market. It will have a knock-on effect into the new year, as companies announce strategies, or bring forward electrification plans, in order to cope with the demand. There may also be a fallout on a political level too, with certain EU member states unhappy over the proposals.

This leads nicely into the third-place choice for voters, electric vehicles (EVs) which took 10% of the poll. With the pressure of CO2 targets, manufacturers will accelerate the push for EV development, with those yet to announce their strategy expected to do so. While some manufacturers are in a position to put new models into production, others will still be continuing their journey. Volvo will end the sale of internal combustion engine models in 2019, focusing purely on hybrid and electric, making it an important year for themselves and the technology.

With 8%, the other category saw comments based on the same topic – how manufacturers deal with financial impacts. This could be from a decline in sales, to tougher trading conditions in certain markets. Some manufacturers have struggled over the last twelve months, with WLTP, Brexit and poor consumer confidence, diesel declines and more having an effect. Jaguar Land Rover (JLR) and Ford of Europe recently announced a number of job cuts aimed at returning businesses to profitability, and it will be interesting to see how other manufacturers and suppliers handle any hits on their profits as the year goes on.

Finally, the diesel market was the choice of 4%, as a decline in sales is expected again in 2019. Early figures from the UK and France show the fuel choice fell 29.6% and 15.4% respectively, while the situation across the rest of Europe is also poor. In addition, a number of German cities will be introducing bans on diesel vehicles this year, joining Hamburg which already has some restrictions in place.

Autonomous technology, car-sharing and manufacturer partnerships received no votes in the latest poll.