I have just handed back this elegant Coupé after a week in which I covered 500 miles of mixed rush-hour traffic and long motorway runs. So, is it good value at £46,000 and am I sad to see it go?

Initial impressions are very good. The interior is very inviting with electrically adjustable memory seats and a very comfortable driving position. You can even alter the width of the seat side bolsters.

The car is impeccably put together, and the complete absence of rattles and creaks is a testament to its overall tautness. The downside of this is that the ride ends up jiggly rather than smooth, no doubt exacerbated by the stiffer springs of the M Sport pack on this car and the extremely low profile run-flat tyres which are notorious for ruining the ride on modern BMWs. There are multiple settings allowing you to switch between comfort and sport for both the drivetrain and the chassis, and to select those individually. I couldn’t detect any appreciable difference between the two chassis settings, although selecting sport for the driveline did make the accelerator and gearbox more responsive, and changed the instrument display! Matters could probably be improved somewhat by specifying standard springs and 18 inch rims rather than the 19s fitted to the test car. If you did decide to swap for non-run flats, then you’d risk driving around with no spare as BMW fit run flats to keep the weight down on what is, at 1690kg, already a pretty hefty car.

At low speeds the 430d is very quiet, and the noise levels don’t increase much on a decent smooth motorway. However, on surfaces like much of the M 40 which is now quite old tarmac, the tyre noise increases appreciably, as it does in other German cars in particular. The roads in Germany don’t seem to create the same roar, so their cars aren’t developed to suppress it.

The gearbox is an eight speed auto, and is the smoothest auto I have ever driven. You can let it choose the gears or do it yourself with paddles, though it really isn’t worth bothering to move your fingers because there are far too many gears to choose from, and the car is far too polite to ever be in the wrong gear, so I quickly settled for just switching between sport and normal. I wonder how many modern cars out there are equipped with paddles that are never used?

The gearbox’s job is undoubtedly made easier by the prodigious engine. This is a turbocharged 3 litre straight six diesel which produces 255 BHP at 4000 rpm and – wait for it – 413 lb/ft of torque between 1,500 and 3,000 rpm. The torque figure helps to explain why the real world acceleration is extremely impressive and makes the car great fun to drive. 0-62 in 5.5 secs! With all that torque it makes sense to have the optional xDrive four-wheel-drive system, which gives the car a sense of secure stability that would be missing in its rear wheel drive sibling, particularly exiting greasy roundabouts at this time of year. The result is a car which is very accurate and controlled through corners, and changes direction with much greater nimbleness than I had expected given its weight. Steering is quite firm for a modern car, which is welcome for enthusiastic driving, but sadly it has no feel and gives no indication of the level of grip at the front. Another gripe about the steering is that the wheel rim, whilst made of a beautiful tactile soft cushioned leather, is simply too thick. 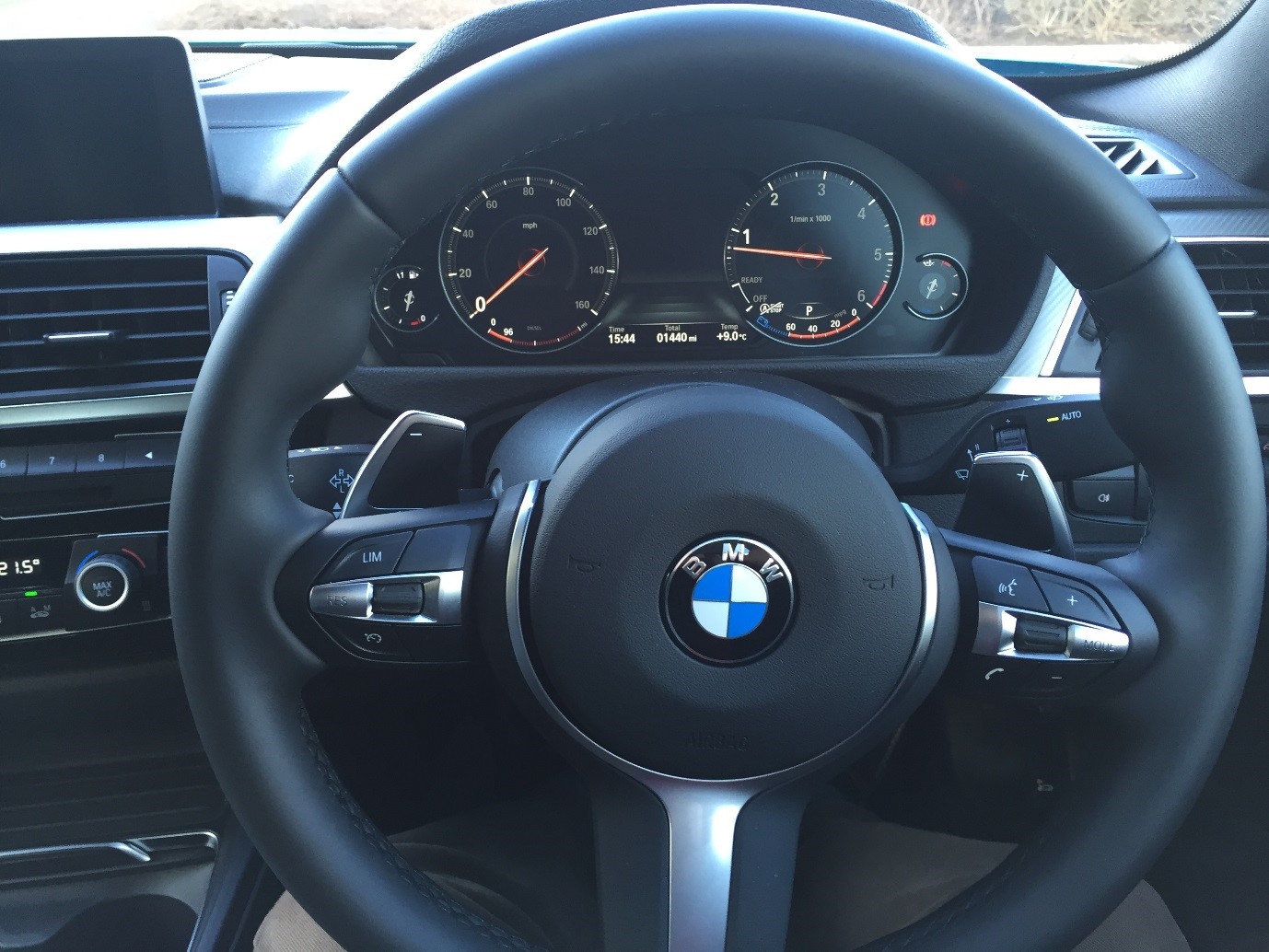 Whilst the acceleration is undoubtedly impressive, the first time you find an open road and put your foot down the usual diesel disappointment appears. Although it’s a six cylinder and therefore much nicer than the four, it’s still a diesel and ultimately doesn’t sound very nice. Also, just when you expect things to get musical, it changes up a gear - maximum power is after all at only 4000 rpm. But, I hear you say, it’s surely much more economical than a petrol equivalent. BMW say it should do 47.9 mpg; during my stint the computer showed 41.9. BMW say the 430i petrol engine should do a competitive 44mpg but as it happens, that’s a 4 cylinder so it won’t have the lovely BMW straight six sound. Ultimately, excluding the M4 which is in a different price bracket, the most appealing 4 series to me is the 326bhp 440i, which doesn’t have 4 wheel drive, but does give you a choice of manual or auto, and should still do over 30mpg whilst retaining that traditional sound track.

The overriding impression is that this is a very polite car. Sit in and close the door, and a discreet arm stretches forward from the rear pillar to offer you the seatbelt. This produced gales of laughter from my daughter and her friends on the school run, which of course set a fun tone for the journey and led to a distracting exploration of all the other toys the car has to offer. We particularly liked the optional sport instrumentation display which can be called up onto the central iPad type screen in the middle of the dash to show power and torque readings as you accelerate. This is great fun for the passengers, but the acceleration is vivid enough that the driver really hasn’t got time to watch anything else apart from the road ahead. 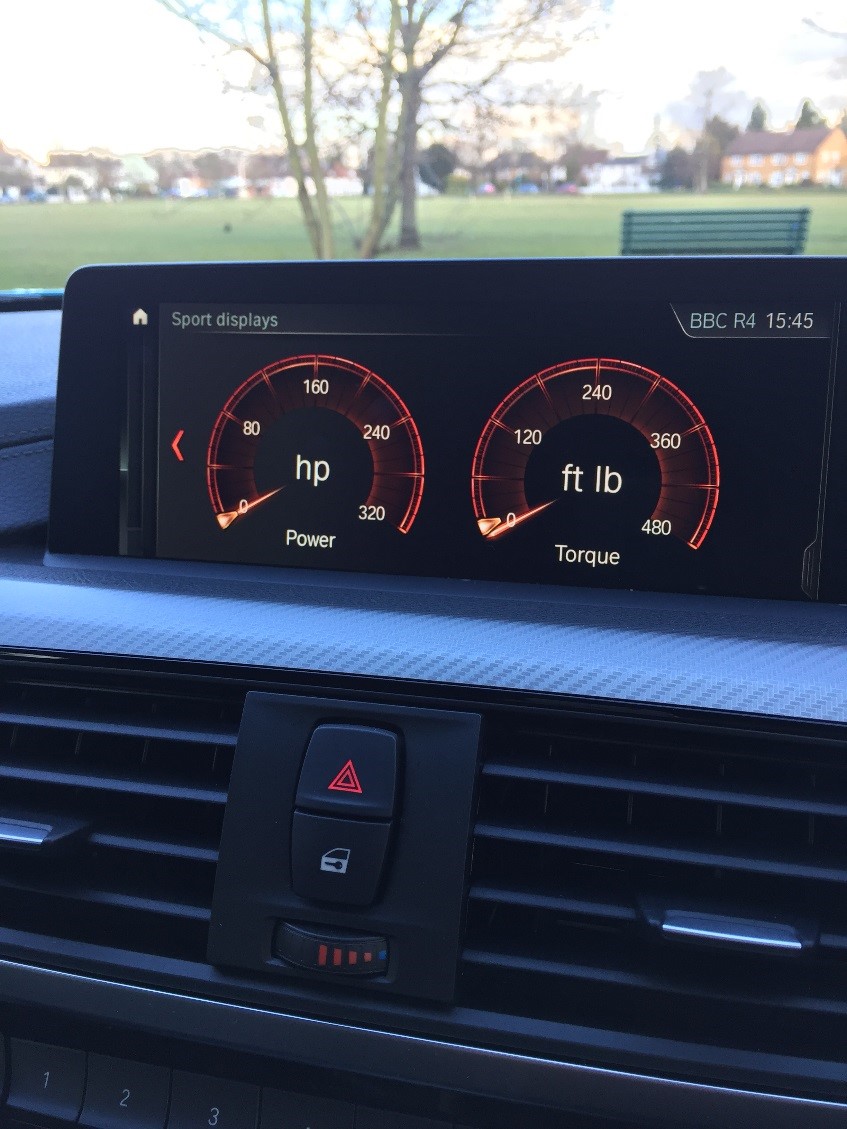