Volvo’s new XC40 is an impressive contender in the mid-size SUV segment, particularly with the very fully equipped T5 AWD First Edition spec as tested here. Volvo is aiming to move beyond its traditional safe and sturdy brand image and to position its whole range in the “premium” end of the car market.

The XC40 meets its objective as it has a feel of real quality throughout. It looks fresh and modern, having been designed with an unconstrained approach in Sweden, this connection being emphasised by the small Swedish flag which appears on the left front wing – a nice touch, despite the cars actually being assembled in Belgium! Interestingly, the XC40 platform will also be used for the new Lynk & Co 01 crossover model which Volvo owner Geely is planning to launch in Europe in 2019.

On the inside, the heated electric memory seats are part leather with alcantara inserts and extremely comfortable, with multi-directional lumbar support adjustment. You immediately notice the elegant chrome-bezelled air vents, and masses of versatile storage space. Place your smartphone on a pad on the centre console to charge wirelessly and with Bluetooth it will be fully integrated for calls, music, internet browsing and apps. 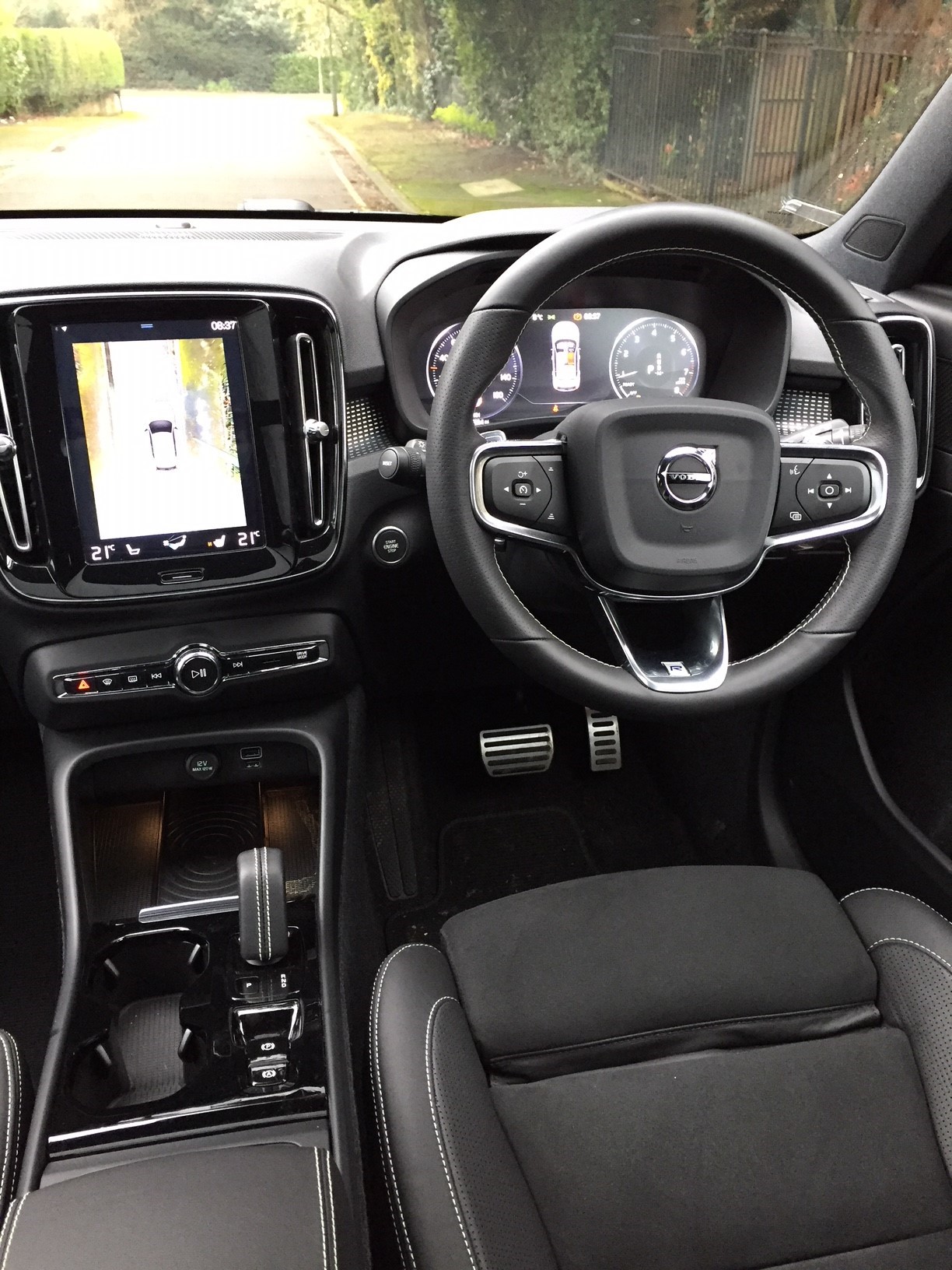 Most controls are accessed through the central nine-inch touchscreen. Quick access to an almost bewildering number of settings and options is done by swiping the screen and is by modern standards intuitive to use. The tech content is very high, both in terms of safety features (as you would expect from Volvo) and also for everyday convenience, where it really excels. Before you even leave the house you can use an app to warm up the car and defrost the windscreen. With another app function you can also get the car to identify itself if you can’t find it in a car park. There is also voice control: you can press a button on the steering wheel and then tell the car where you want to go. You can also use it to operate seat heating and radio settings.

In the boot - which can be opened by swinging your leg under the rear of the car - there are switches to flick forward the rear seats electrically, and a space under the boot floor to store the parcel shelf. Part of the boot floor will hinge forward and upright and has hooks to enable shopping bags to be carried without their contents rolling out at the first corner. There is also a button to flick the rear headrests forward through 90 degrees to give a clearer view behind, a particular novelty which my seven-year-old daughter found vastly amusing as it can be deployed to give an unexpected pat on the head to a rear seat passenger.

The 360⁰ surround view parking camera displays in full colour and is a smart and useful feature, prompting several passengers to ask if it was linked to a satellite. In fact, it knits together a picture of the area around the car from four discreet cameras on the front, rear and under the door mirrors. It’s pretty much indispensable given the height of the vehicle and the difficulty of seeing how close you are to kerbs, walls and more vertically challenged vehicles.

Every XC40 is packed with the latest safety features, including “oncoming lane mitigation”, a device which steers the car automatically if it senses it drifting out of the lane. There is also a semi-autonomous pilot assist function which can follow the lane markings on dual carriageways, but it didn’t inspire enough confidence on crowded UK roads to keep it switched on. This would probably work well in conjunction with the adaptive speed control on long trips on the French autoroute for example. The “City Safety” feature pre-applies the brakes (which feels like ABS being triggered) and sounds a buzzer if the car detects the possibility of a frontal collision. This seems to be over-sensitive sometimes triggering without any apparent reason, which can be distracting. Fortunately, it can be turned off, but this seemed to need doing each time I drove the car.

Verdict
So what’s it like to drive? I liked its refinement, the commanding view – although huge B pillars make visibility out of T-junctions difficult at times. The steering is well-weighted and precise without being nervous, and the ride is firm but doesn’t suffer from the longitudinal pitching that used to blight SUVs. The test car’s 19-inch wheels (up on the standard 18”) make light work of speed humps, and the car is very stable and relaxed on the motorway. As with any SUV this side of a Porsche, it isn’t a car that encourages you to seek out the nearest race track and start measuring lap times, but Volvo isn’t aiming at that market.

The test car had the top of the range 2-litre petrol turbo engine producing 247bhp and 350lb/ft of torque giving 0-60 in 6.2 secs and 140 mph. Plenty fast enough and pretty quiet and smooth for a four-cylinder, the smoothness being enhanced by the seamless eight-speed auto. On brief acquaintance, the diesel is also quiet and refined. The gearbox offers four drive modes, eco, comfort, off-road and dynamic. In dynamic it is very eager and tends to hang on to lower gears; this is when the gearshift paddles are useful to change up without having to go back into comfort. Independently of the drive mode, the instrument panel can be configured in four different settings, including sport which makes everything glow red but which somehow didn’t seem appropriate. Being the top of the range, the T5 AWD is no lightweight at 1,665kg, so an overall indicated fuel consumption figure of 25.6mpg wasn’t a great surprise, but to be fair, the test did include some very dense traffic conditions.

Volvo has a really appealing car in the XC40. Starting at just under £28,000 for the T3 Momentum with front-wheel drive, which is already extremely well-equipped, and rising to £40,055 for the T5 First Edition, the range should do very well as a spacious yet (relatively) more compact offering in the SUV market, bristling with safety and convenience features, stylish, easy to live with, and relaxing to be in. I was sorry to hand it back. 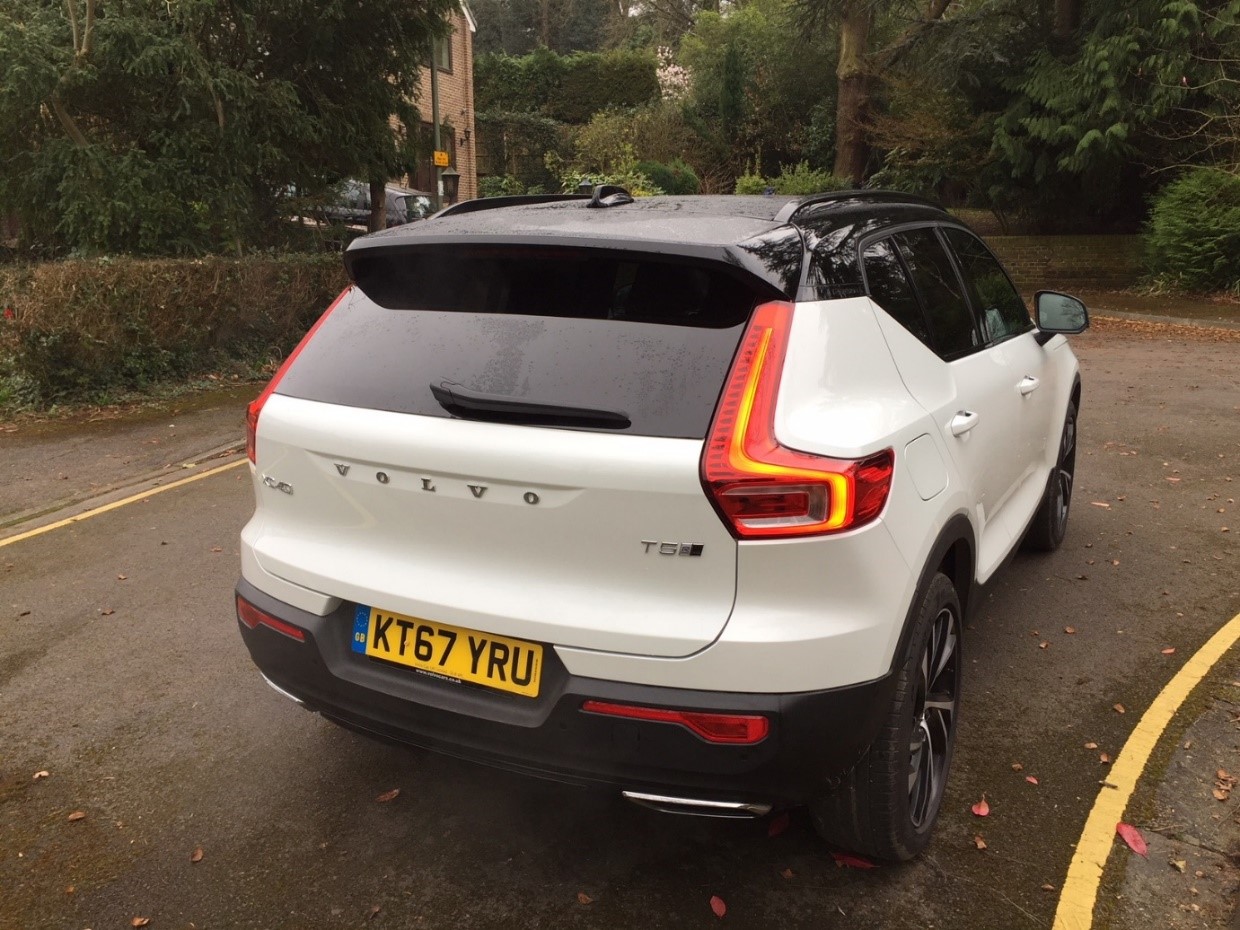