The Niro is Kia’s first dedicated hybrid and was launched in the UK in 2016, although I must admit I had never noticed one on the road before I took delivery of the test car. It combines a 1.6 L four-cylinder petrol engine with a lithium-ion battery to produce a combined power output of 139bhp.

While Kia does now produce a plug-in hybrid; the test car did not have a charging cable as it is a parallel hybrid, which means that most of the time the petrol and electric power units work together. However, it can operate in all-electric mode for short distances when setting off, under gentle acceleration, and when descending slopes or braking. A brake energy recovery system recoups energy normally dissipated as heat and stores it in the batteries for later use. The switch between modes is seamless and varies according to the load being placed on the powertrain at any time. The battery level during my tenure stayed in the range between 50% and 75% charged. I suspect a long mountain descent with frequent braking would be needed to get to a fully charged reading.

The result is a car that is unusually economical on fuel for its size and weight and with emissions of 88 g/km on the smaller 16-inch wheels. The test car sported the optional 18-inch wheels which seemingly alone raise the emissions to 101g/km and increased official fuel consumption figures by a massive 10mpg. On a car which is clearly trading heavily on its efficiency credentials, it’s a mystery to me why they even offer the 18-inch wheels option!

The gearbox is a six-speed dual clutch auto, driving the front wheels and offering eco and sport modes. It operates seamlessly, and a new transmission mounted electric device allows the hybrid system to access battery power directly at higher speeds for a swifter response. Kia make great play of the extensive use of aluminium for the bonnet, tailgate panel, front bumper beam, part of the front suspension and the brake callipers as contributing to weight saving, but with its battery pack (mounted under the rear seat) the vehicle still has a chunky kerb weight fully fuelled of 1,651kg. 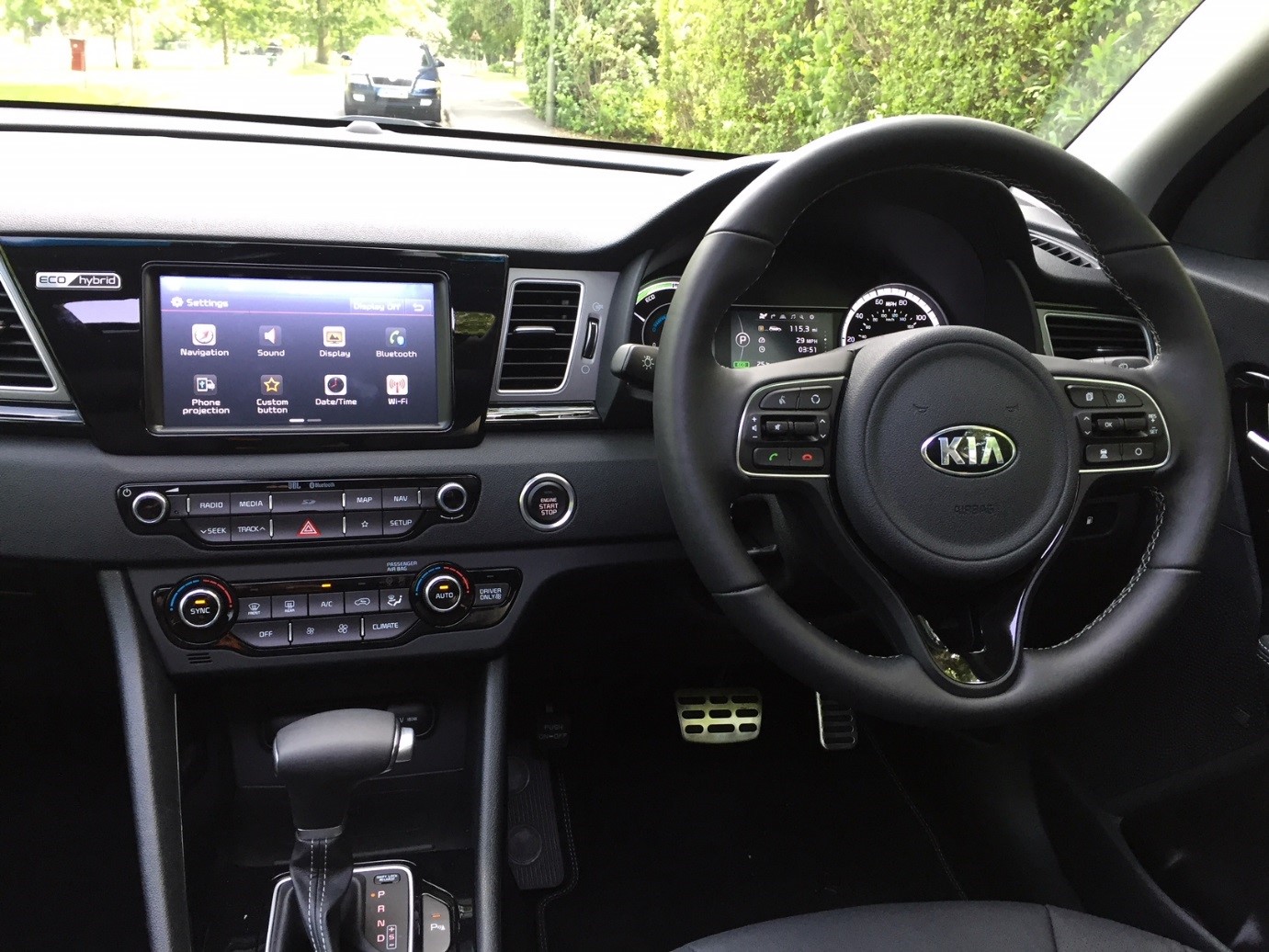 When you approach the Kia with the keys in your pocket, the door mirrors electrically unfold, whether you intend to get in it or not! After switching on, the engine does not start immediately as the car moves off in electric mode, but a jingle plays. The same ditty is played when the car is switched off, and this does get a little wearing after frequent exposure. Moving off was a challenge for me until I finally discovered that the parking brake is a foot operated pedal hidden in the corner of the footwell!

Inside the Kia has all the modern toys we have come to expect. The leather-covered steering wheel is just the right size, although the twelve buttons crowded on to the steering wheel are small, and some of the markings are hard to decipher. The central touchscreen in the dash is intuitive and easy to use. The black leather seats are very comfortable, and the car is well made and overall feels like a quality product inside.

The Niro is relatively compact but high like an SUV and although not as good looking as most of the other cars in the Kia range, it is quiet and unassuming and won’t get you noticed. However, the downside to the looks is that other road users often assume you are a timid and subservient character behind the wheel and that you will always give way to them if there are parked cars or other obstructions in the road, even if it’s your right-of-way, and often pull out in front of the car.

Underway, the Niro is very quiet on the road, even at motorway speeds, corners tidily, and grips strongly. The ride is on the firm side (another reason not to specify the 18 inch wheels and low-profile tyres), but smooth over bumps and decently absorbent and un-fussed over really poor surfaces. Acceleration in eco-mode is on the leisurely side of relaxed, and the gear selector needs to be in sport to make reasonable progress. There is an unusual somewhat wooden feel to the brake pedal, which I expect relates to the braking force being used to regenerate the battery, but despite their un-progressive nature, the brakes do stop the car well. The collision warning system gets panicky at an early stage when the car is being driven in areas where there are parked cars and other obstacles. I didn’t work out whether it was possible to turn it off but would want to do so if possible. Rear seat space is good with plenty of legroom. The boot, however, had a fairly high floor which meant it was smaller than expected, especially bearing in mind there was no spare wheel.

Overall, the Niro is well made, extremely well equipped, loaded with the current safety features, and comes with Kia’s extremely confident seven year / 100,000-mile warranty. On all these levels it makes a lot of sense. If only it were better looking and a bit more fun! The only thing my wife said about it was that she liked the white stitching on the seats, and really that says it all. 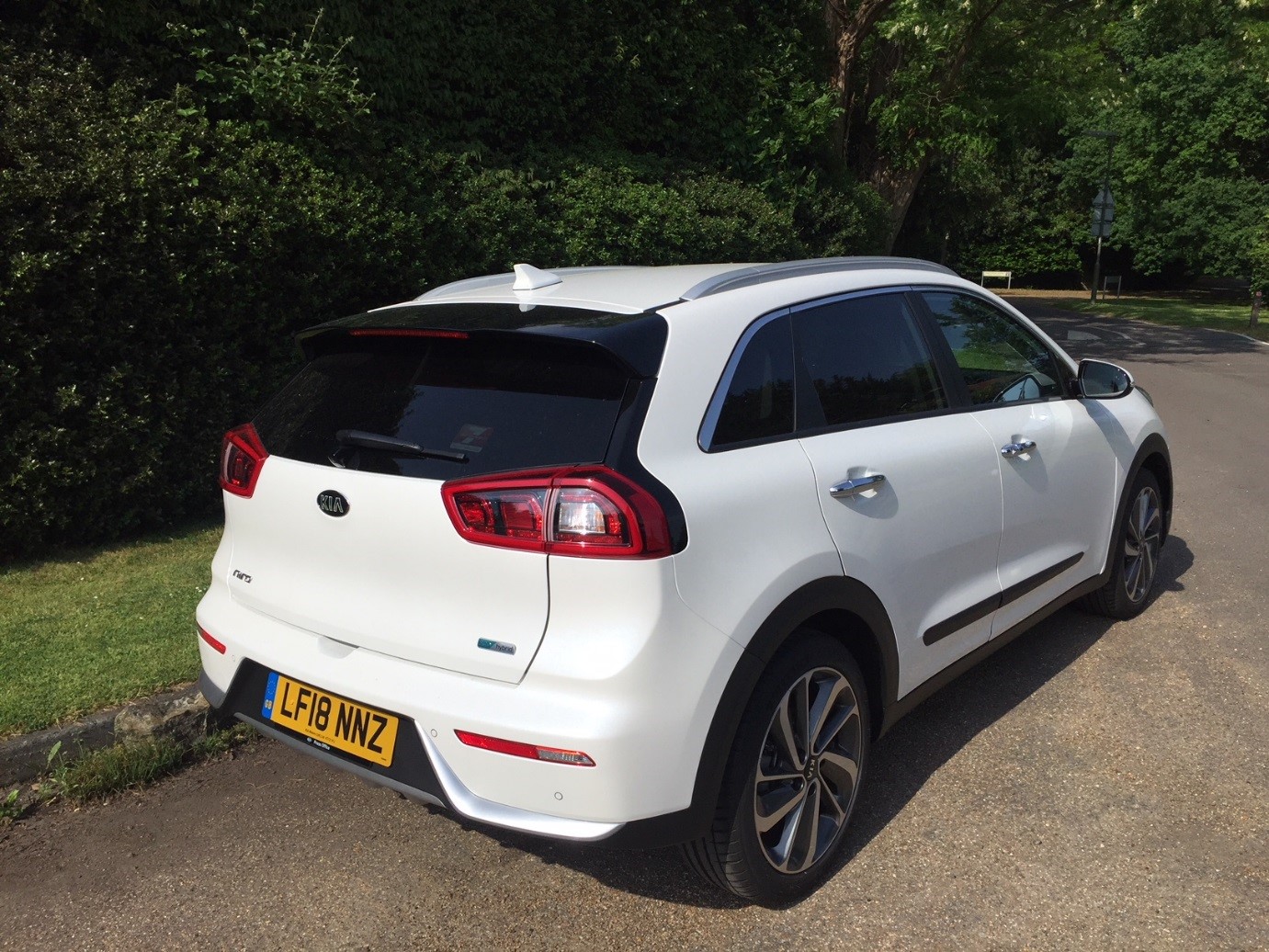