With a history of owning ten Alfas stretching back to my second car (an Alfasud Ti), I felt well-versed in the unique attributes of the marque, both positive (the heroic performance of my Bertone 2000 GTV on the Tour Auto) and negative (the frustration and disappointment of the GTV6), and was looking forward to getting to know the Giulia. In the event I really enjoyed it, although being an Alfa, it did possess a few – and only a few – foibles to add what Alfisti call character.

The test car came equipped with a 2-litre turbo petrol four-cylinder engine in the lower of the two available stages of tune, 200bhp, and an eight-speed automatic gearbox. In these lie the first two gripes, at least, for an Alfa traditionalist. Alfas have been loved forever for their tuneful, revvy, enthusiastic four cylinder twin cam engines and slick, satisfying five speed boxes. The Giulia, however, has a quiet and comparatively uninspiring engine note which at low revs could almost be mistaken for a diesel. On the plus side, it feels rather more powerful than its claimed 200bhp would lead you to expect, and it is nicely torquey thanks to its turbo. The second issue is that the (reportedly very good) six-speed manual box is not available in UK market models, which all only come with the auto. Maybe this is to punish us for Brexit. The auto is, at least, very smooth and efficient, and the large alloy gearchange paddles are the nicest and most precise I have yet come across. But the rest of the car is so good that I couldn’t help wishing for a manual.

The Giulia’s handsome and distinctive looks were enhanced by being finished in a stunning colour called Montecarlo Blue, with a contrasting and most attractive tan leather interior and “Silverwood” dash and console finish creating a lovely ambience in the cabin. Everyone who saw the car found it very appealing and enjoyed the ride. It is decently roomy, and the driving position is comfortable. There is reasonable oddments space inside, although the door pockets are restricted by the armrests, and there is a good-sized boot. 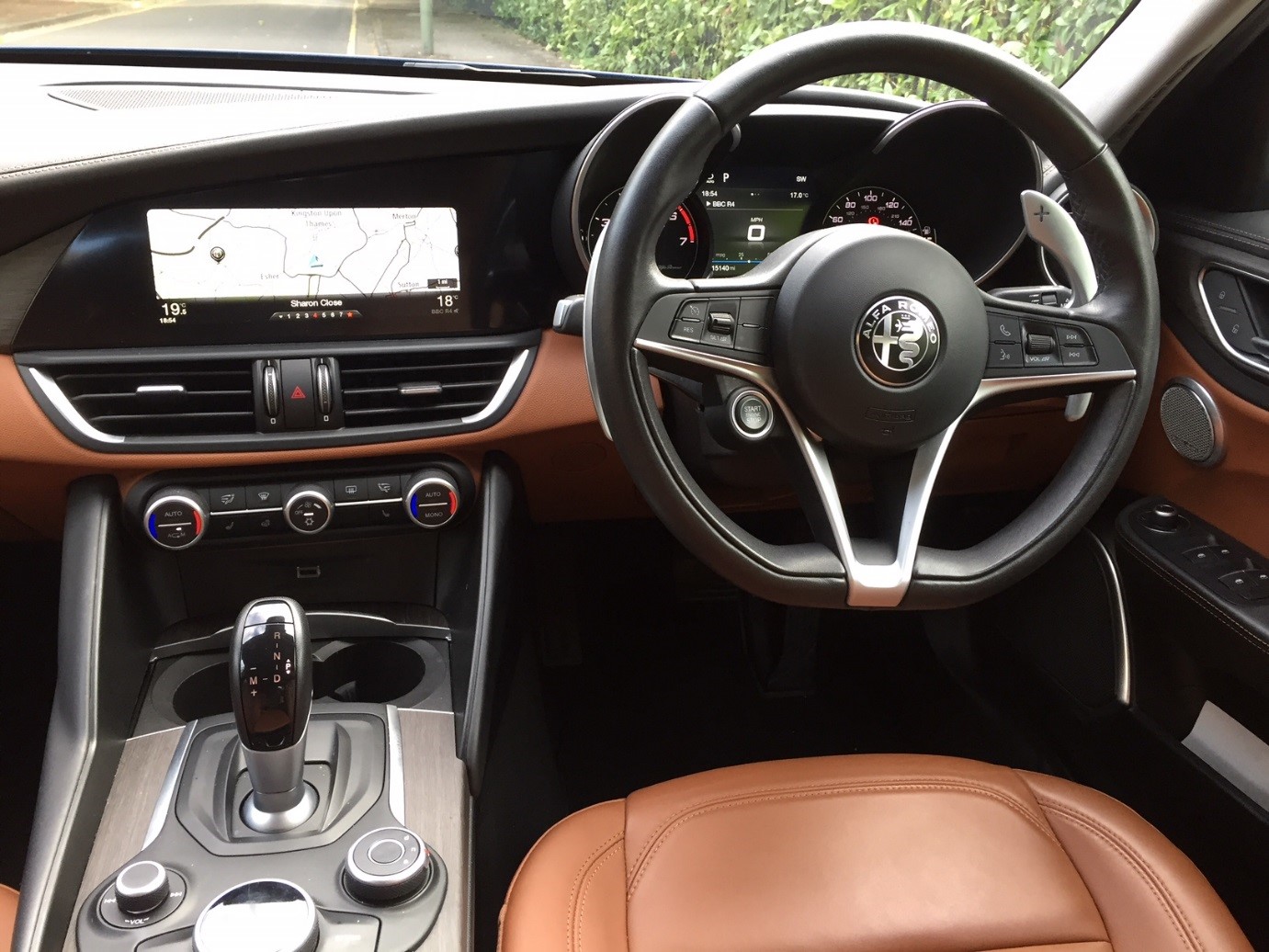 Before the drive, there is one final irritation to overcome. When the driver opened the door at the end of the previous journey, the electric seat automatically slid back – I guess to allow amply upholstered drivers to get out more easily. However to my mind, this is completely unnecessary – it is more difficult to get out if you can’t steady yourself on the steering wheel, and then when you get back in you have to press the starter button on the steering wheel to get the seat to move back to the correct position. I couldn’t find any way of switching this feature off, even after a long hard look at the instruction book. I suggest, therefore, not specifying electric seats.

Press the starter button again and drive off. Immediately the irritations subside, and you know within the first few seconds underway that this is a car with an unusually supple ride, in contrast with the harshness of so many of today’s cars fitted with low profile modern rubber. In turn, the steering is also a delight, being precise, well-geared, not overly light, and so intuitive that you bond with the car straight away. It must help that the engine is mounted quite far back, behind the front axle line, which helps give the car a 50:50 weight distribution, and with rear wheel drive and many light aluminium suspension components, the car corners with panache. It positively encourages an exuberant approach to twisty country roads that I haven’t experienced in a modern saloon for years. It puts a huge smile on your face and feels really supple yet well tied down no matter how hard you chuck it into a bend, with proper feel through the steering. In fact, it reminded me of the seemingly endless cornering ability of my Alfasud all those years ago. The steering wheel is just the right size, and the leather feels good. The gearshifts are really smooth, and the paddles are enjoyable to use. The brakes are strong, decently progressive and claimed by Alfa to have the best in class braking distance. This car rewards drivers like few others in its class if any.

On the motorway, the Alfa is quite noisy, with some road roar and a fair amount of wind noise. I can forgive it for this…There is a “DNA” switch on the centre console behind and to the right of the gear selector, and this enables you to choose between “advanced efficiency” (economy), “natural” (normal) and “dynamic” modes, which adjust throttle response and gear change up speeds. The differences are strong. Suffice it to say I ignored economy and was quite happy with normal except on the aforesaid country roads. The Giulia is well-equipped with all the usual safety features and has a 5 star Euro NCAP safety rating with a score of 98% for adult occupancy protection – proof that a car can be fun, great looking, and also safe. The test car had a reversing camera display on the central screen, along with a sat nav system which had a pretty poor map display and wasn’t easy to programme. I can forgive it for this too.

The Giulia range starts with the 2-litre 200bhp petrol engine at £29,880. The test car was in Super spec which starts at £31,580, though it was loaded with extras and the Lusso pack which pushed it up just over £40k. Or you can choose between 2.2-litre diesels with 150 or 180bhp. If you choose the Veloce model (from £38,265), you will have 280bhp from the 2-litre petrol engine. The top of the range is the Quadrifoglio which has a 2.9 V6 producing 510bhp which was developed in collaboration with Ferrari. This is listed as a separate model in Alfa’s catalogue, not surprisingly at £61,625.

On the evidence of the test car with the base 200bhp engine, I can’t think of a better way for a driving enthusiast to choose a new car for under £30,000. 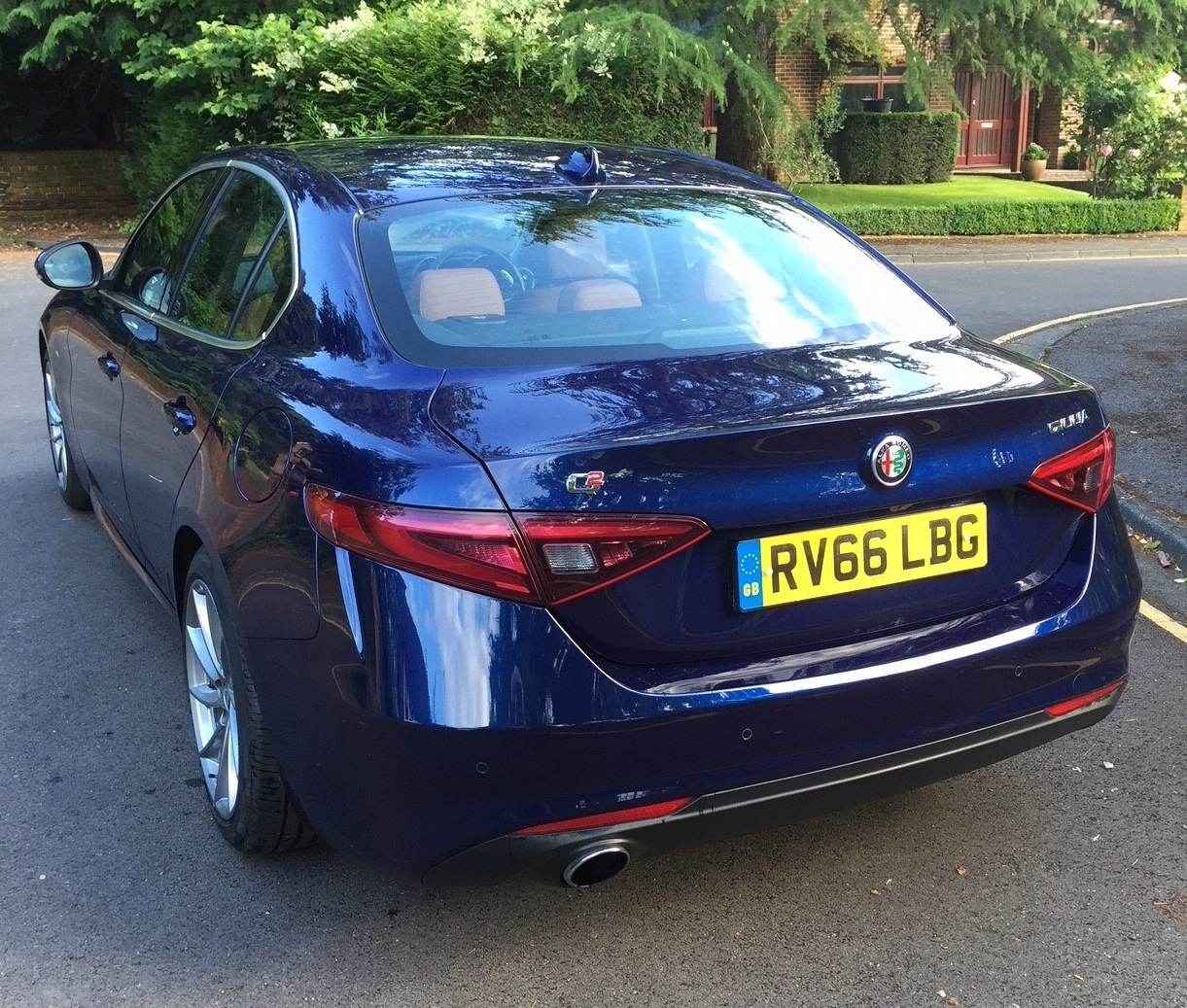