The latest data from the respective associations in the major continental European markets reveal that the volume of used-car transactions grew in July 2020 compared to the same month last year. Autovista Group senior data journalist Neil King considers this return to growth across Europe’s used-car markets as the sector tentatively recovers from the coronavirus (COVID-19) crisis.

Used-car sales increased by 13% year-on-year in both France and Germany in July, and were up 9% in Italy and 6% in Spain. Through to July, Germany is the only major European used-car market that has not suffered a double-digit decline, with a comparatively modest contraction of 8%.

Used-car data is not yet available for the UK for July but is expected to follow the growth trend, especially given the 11% surge in new-car registrations in the country’s first full month of trading since February. This is even without increased buying incentives, which have been introduced in France, Germany, Italy and Spain. 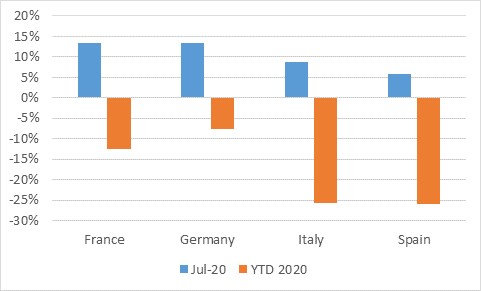 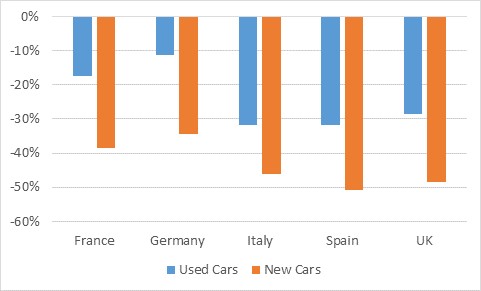 In the UK, the used-car market contracted by 28.7% in the first half of 2020, according to the latest figures released by the Society of Motor Manufacturers and Traders (SMMT) on 11 August. Following a comparatively modest decline of 8.3% in the first quarter of 2020 as the COVID-19 lockdown from March negated growth in January and February, there were only 1,039,303 changes of ownership in the second quarter, equating to a 48.9% slump in the second quarter. However, ‘the pace of decline eased as the quarter progressed, from a peak year-on-year loss of 74.2% in April to 17.5% in June, as private sellers and buyers got back on the move and transactions began to restart,’ the SMMT stated.

‘As devastating as these figures are, with full lockdown measures in place for the whole of April and May, they are not surprising. As the UK starts to get back on the move again and dealerships continue to re-open, we expect to see more activity return to the market, particularly as many people see cars as a safe and reliable way to travel during the pandemic. However, if we’re to re-energise sales and the fleet renewal needed to drive environmental gains, support will be needed for the broader economy in order to bolster business and consumer confidence,’ commented Mike Hawes, SMMT chief executive.

There were similar contractions of the used-car market in Spain and Italy. Spain suffered the most, with 31.7% fewer changes of ownership in the first half of 2020 than a year earlier, but new-car registrations declined by more than 50%. There was a phased approach to relaxing the lockdown measures in Spain, which largely explains why both the new- and used-car markets were still weak, even in June. However, dealers can now fully reopen, and the introduction of the MOVES II incentive scheme for new battery-electric vehicles (BEVs) and plug-in electric hybrids (PHEVs) and the RENOVE scrappage scheme have stimulated the Spanish market since their introduction in early July.

Used-car demand fell 31.6% year-on-year in Italy in the first half of 2020, compared to a 46.1% contraction of the new-car market. However, many buyers of both new and used cars decided to hold off until government incentives came into effect at the beginning of August as part of the Decreto Rilancio (Relaunch Decree). This new scheme comes on top of the Ecobonus scheme, which incentivises cars producing less than 20g of CO2/km.

Electric and hybrid cars can now benefit from up to €10,000 in subsidies when scrapping an older vehicle. €3,500 is now provided for scrapping vehicles that are at least 10 years old when buying a new Euro 6 vehicle with CO2 emissions up to 110g/km, and a price of up to €40,000. Dealers will put forward €2,000 towards the incentive, while the state provides €1,500. Without trading in an older model, the funds drop to €1,750.

In France, the 17.4% decline in used-car sales in the first half of 2020 was a significantly better performance than the 38.6% fall in new-car registrations. Whereas the incentives introduced on 1 June for new BEVs and PHEVs remain, the additional bonus for trading in older cars for cleaner new and used cars was exhausted before the end of July. The scrappage scheme reached its 200,000-vehicle cap after just two months, but the Ministry of Ecological Transition announced it would be replacing the recovery scheme with a conversion bonus, applicable from 3 August.

Germany has weathered the COVID-19 storm better than the other major European markets, with only 11.4% fewer changes of ownership in the first half of 2020 compared to the same period last year. New-car registrations have also suffered less than in the other major markets, but were still down 34.5% in the first half, and have therefore been outperformed by used-car demand here too.

As used-car markets have proven more resilient than new-car markets, the impact on residual values (RVs) has been rather marginal in European markets so far this year. Nevertheless, a ‘three-speed’ development of residual values (RVs) is emerging. The UK and France are benefitting from pent-up demand and some markets have had a rapid reaction to the impact of COVID-19, but most are ‘late starters’ with limited value movements thus far. 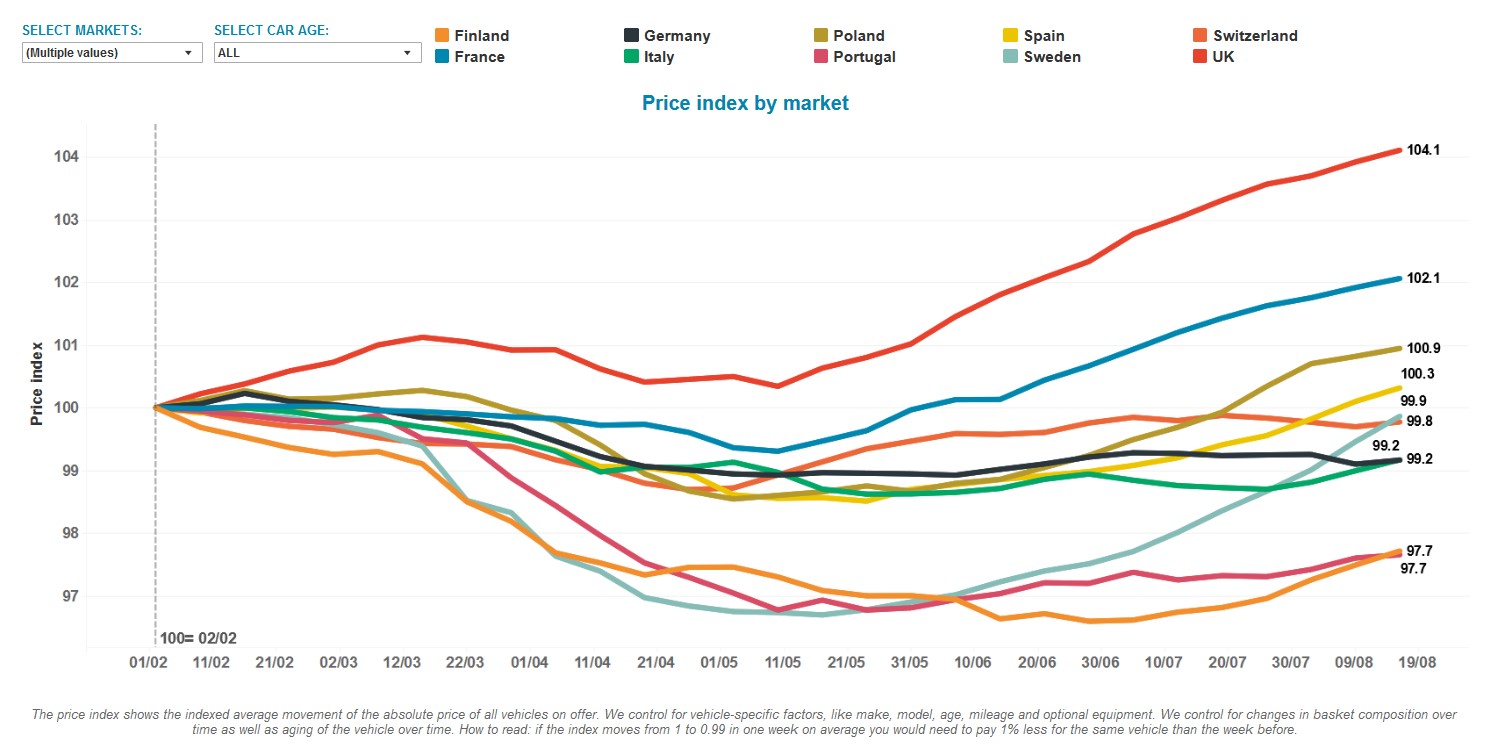 As COVID-19 lockdowns are left behind, thoughts turn to economic recovery. However, as the latest update to the Autovista Group whitepaper ‘How will COVID-19 shape used car markets’ explains, in the last month, the situation has taken a gloomier turn. Download your copy here.