In contrast to the dramatic 29% decline in new-car registrations, used-car transactions in Spain declined by 12.8% in 2020, to 1,963,053 transactions, according to GANVAM, the Spanish dealers’ association.

'The used-car market in Spain is always more favoured than the new-car market in times of crisis. Sales fell by only 13% in 2020, and the age structure of these sales has changed substantially in recent months and will continue to do so throughout 2021. The most notable change is undoubtedly the lower prevalence of young used cars in the market, caused by the standstill in tourism and the lack of renewal of rental fleets. In 2021, we also expect a greater share of electric vehicles in the used-car market, which accounted for just 0.2% of total sales in 2020,’ explained Ana Azofra, valuations and insights manager at Autovista Group in Spain.

In the UK, used-car sales data are not yet available for full-year 2020, but the country’s used-car market contracted by 17.5% year-on-year in the first three quarters. Autovista Group estimates that used-car transactions were 15% lower in the year as a whole. This is only about half the contraction suffered by the new-car market. Used-car transactions are naturally expected to improve in 2021, but with a lower growth rate than new-car registrations.

Used-car transactions in France declined by a modest 3.8% in 2020, compared to a 25.5% fall in the new-car market, according to industry association CCFA. ‘The demand for diesel cars on the used-car market is still high while the supply is lower and lower, but petrol sales, which account for about 40% of total used-car sales, reached a maximum in 2020,’ explained Yoann Taitz, Autovista Group head of valuations and insights, France and Benelux. Limited growth, if any, is therefore expected in 2021.

Even in Germany, where the used-car market declined by only 2.4% in 2020, according to the KBA. Schwacke expects a slight improvement in used-car sales compared to 2020. ‘The used-car business was quite successful over the past 12 months under the circumstances and sold slightly more than seven million cars by the end of the year. The forecast for 2021 is the same - around seven million cars,’ commented Andreas Geilenbrügge, head of valuations and insights at Schwacke.

(Note: UK is estimated, based on the latest data)

Autovista Group’s COVID-19 tracker shows that the index of residual values (RVs) finished 2020 at or above pre-crisis levels in all of Europe’s major markets. The measurements began in February, with an index value of 100. 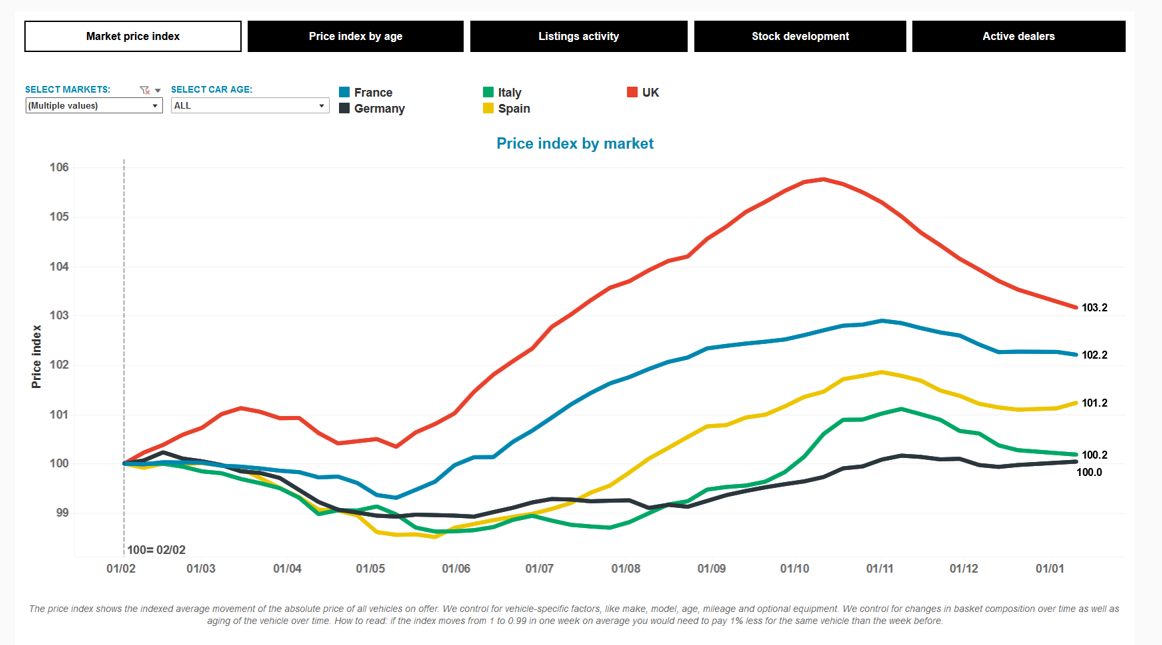 Residual values have peaked, however, and have declined in recent weeks. Looking to 2021, ongoing COVID-19 restrictions and the economic impact, as well as the aversion to public transport, will support used-car demand. Autovista Group therefore predicts that residual values will only come under limited pressure.

The tax rise in Spain, with the introduction of WLTP-based emissions figures, and the end to the RENOVE scrappage scheme will hinder new-car demand and means RVs may increase slightly in value terms in Spain, but a 1.1% decline is forecast in terms of trade percentage, i.e. value retention, in the standard 36-month/60,000km scenario.

‘We foresee a difficult year for the sector, especially in terms of new-car sales. However, used-car sales will resist the onslaught of the crisis better and only their average residual values will be slightly affected.’ Azofra emphasised.

‘Electric vehicles will experience greater pressure on their transaction prices in the used-car market. On the one hand, their price is still very high, which is an important market barrier, even more so in crisis circumstances such as the present. On the other hand, demand is trying to be stimulated through incentive schemes, so it will be difficult to maintain their used-car price. In addition, the recharging infrastructure is still insufficient, the poorest in the big five European countries, which reduces their development space in the used-car market. With regard to the rest of the engines, we estimate small negative adjustments in petrol and diesel vehicles and greater stability for hybrid engines, which are in increasing demand.’

The end to Brexit uncertainty could serve as a positive for the UK’s new-car market, but deliveries may be affected and price rises are expected as the share of components in some engines will invariably exceed the ‘locally-sourced’ threshold. It is an incredibly difficult call but Glass’s, the UK arm of Autovista Group, forecasts a 1.4% decline in RVs, in trade percentage terms.

Schwacke points out that fleet registrations from 2017/2018 declined somewhat in Germany and there were also almost 400,000 tactical registrations less from 2020, of which usually two thirds are sold to end customers as young used vehicles in the year after first registration.

‘In view of the expected stable demand, this is definitely a plus point for price development in the coming year, but supply volume will probably struggle,’ said Geilenbrügge. The return to a 19% VAT rate on new cars will also affect RVs, but a modest decline of 0.7%, in trade percentage terms, is forecast for used cars in the 36-month/60,000km scenario.

The tax changes in France, which penalise petrol cars more than diesels, and incentives for EVs present a mixed picture. ‘In 2021, there is a clear risk of having a new-car market in contradiction with the used-car market. For CO2 reasons, the fuel types that are driving the new-car market are not the most attractive ones on the used-car market. Lower supply will reduce the RV pressure on petrol cars, and the sales stop of powerful diesel engines, which are well demanded on the used-car market will especially support RVs of these specific vehicles. The high prices and bonus for EVs still impacts RVs, especially at 12 months, but the €1,000 bonus reduction in July 2021 will support RVs more positively,’ explained Taitz. Overall, the latest RV outlook for France calls for a minimal drop of 0.4% in the prices, in trade percentage terms, of used cars.

The poorest RV outlook is in Italy, where used cars have not weathered the COVID-19 storm better than new cars and the introduction of additional incentives for new cars will apply more pressure on used-car demand and residual values. RVs of used cars in the 36-month/60,000km scenario are currently forecast to fall by 3.9% in trade percentage terms. 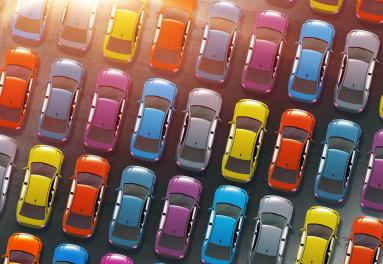