The UK sees registrations drop in August ahead of plate change

The UK saw new-car registrations decline by 5.8% in August, as pent-up demand caused by coronavirus (COVID-19) lockdowns slowed ahead of the traditional September plate change.

Just over 87,000 passenger cars were registered last month, in what is traditionally a quiet period for the UK’s automotive industry. Buyers often wait for the new-plate releases in September, although the disruption caused by COVID-19 is likely to have played a part in the decline too.

While registrations to private buyers held relatively steady, down by 699 units in the month, demand from businesses of all sizes was much more subdued, with 2,650 fewer new cars joining UK fleets, down 5.5% on August 2019, according to data released by the Society of Motor Manufacturers and Traders (SMMT).

Following a dry spell as the UK Government removed grants for plug-in hybrids (PHEVs) last year, the technology enjoyed a surge in popularity during August, with sales increasing by 221.1%, although still only accounting for one in every 30 sales. This tallies with a theme seen in the EU, with PHEVs leading the registrations in electrically-chargeable vehicles during the second quarter of the year.

In contrast, registrations of battery-electric cars increased by 77.6% in the month, accounting for 6.4%. However, they make up just 4.9% of registrations in the year-to-date, up from 1.1% in the same period last year. The SMMT believes this clearly illustrates the scale of the challenge ahead to reach the government target for EVs to comprise 70% of new-car sales by 2030.

The figures are released as the UK automotive industry calls for binding targets on charging-infrastructure development and long-term commitments to incentivise the purchase of zero-emission capable vehicles to accelerate demand.

Overall, registrations remain down by -39.7% in the year-to-date, some 600,000 units behind this time in 2019, following coronavirus enforced lockdowns.

The industry seemed buoyant in July, with registrations up 11% following months of declines, even prior to COVID-19 lockdowns introduced at the end of March - a move that saw dealerships remain shut until June.

‘The decline is disappointing, following some brief optimism in July,’ commented SMMT chief executive Mike Hawes. ‘However, given August is typically one the new car market’s quietest months, it’s important not to draw too many conclusions from these figures alone. With the all-important plate change month just around the corner, September is likely to provide a better barometer. As the nation takes steps to return to normality, protecting consumer confidence will be critical to driving a recovery.’

The decline of 5.8% in August is in line with Autovista Group’s forecast for the month, and therefore the overall decline of 30% by the end of the year is held. A slight bounce in registrations is forecast for September with the plate change. However, this is likely to be in line with previous years, and the market will not fully recover following the lockdown period. 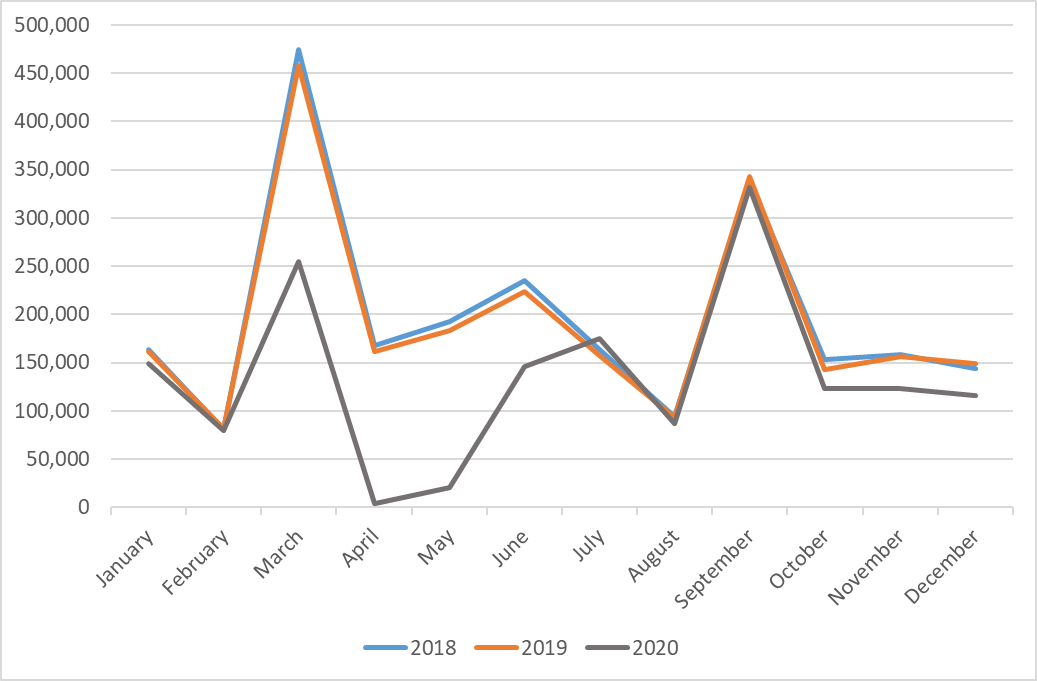 This is aligned with the SMMT, which has downgraded its outlook for 2020 to a 30% decline in registrations, ‘representing more than £20 billion (€22 billion) of lost sales.’

However, in an upside scenario, disruption to the UK automotive sector will be more short-lived as dealers quickly overcome supply shortages and return to full operational capacity, accompanied by another release of pent-up demand during September. A less severe impact on the wider economy would also bolster new-car registrations later in the year. In this scenario, about 400,000 registrations will still be lost, but the forecast is for 1.86 million registrations in 2020, down 19.5% on 2019. 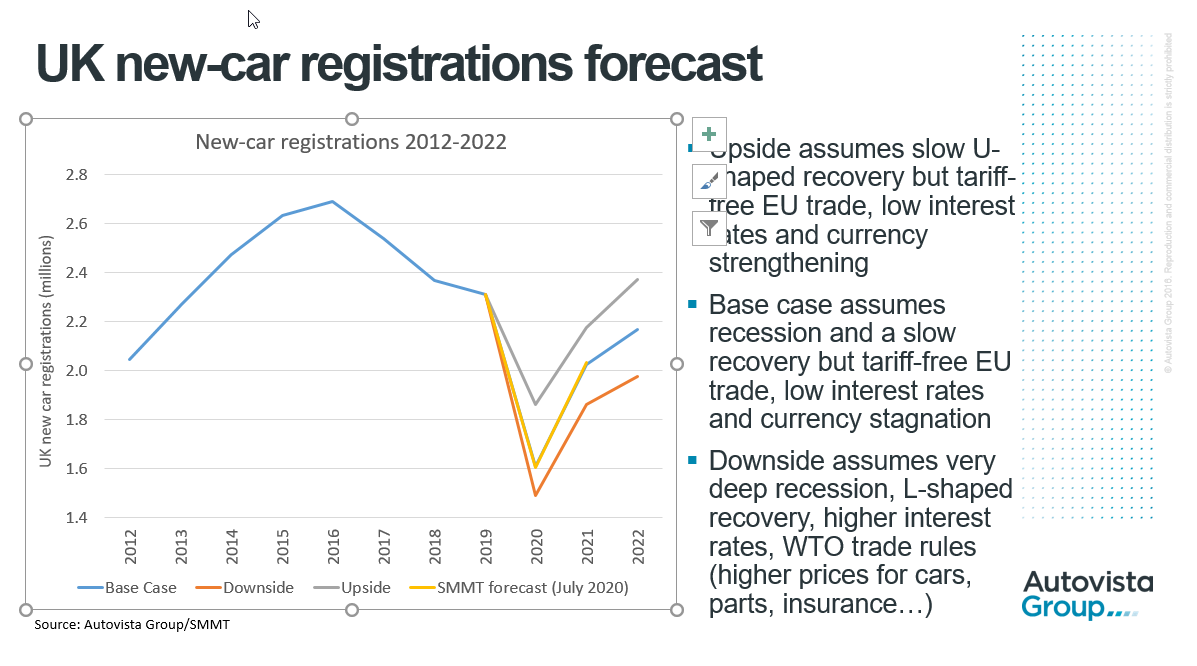 The UK’s automotive market was even volatile prior to coronavirus, with the impact of Brexit and resulting economic pressure affecting vehicle sales. With the country currently in a transitional period until the end of the year, and future trading roles between the UK and the EU uncertain, the wake of COVID-19 could hurt the market even more.

Recent reports only add to the uncertainty; the EU’s chief Brexit negotiator Michel Barnier said that talks with Britain often appeared to go backwards rather than forwards.

‘At this stage, an agreement between the UK and the European Union seems unlikely,’ Barnier told a news conference after two full days of negotiations in Brussels.

‘On the European side, we are very concerned about the state of play in our negotiations. The clock is ticking.’

A downside scenario factors in the UK not reaching a trade agreement with the EU, resulting in a very deep recession and L-shaped recovery. The key consequence for the automotive sector is that WTO trade rules would be applied, resulting in higher prices for cars as well as for replacement parts and insurance. In this downside forecast, new-car registrations are forecast to increase by 25% in 2021 but only by 6% in 2022. At just under 2 million registrations, the market would still be 300,000 units lower in 2022 than in 2019.