The UK’s new car market has started the year with a decline, with diesel sales, in particular, taking the volume into negative territory.

Sales in January were down by 1.6% compared to the same month last year according to the latest SMMT figures. A total of 161,013 new cars were registered for use on UK roads, with trends in fuel choice seen last year continuing into the first month of 2019.

Following a decline in December, private demand increased by 2.9%, with 71,378 new cars registered in the month. However, demand from business and fleet buyers fell by 33.5% and 3.4% respectively.

Petrol demand grew in the month, by 7.3%, but the demise of the diesel market shows no sign of abating in 2019 with a contraction of 20.3% in January. This is the 22nd consecutive month of decline for the technology, which has suffered from media demonisation and rises in vehicle excise duty (VED). Petrol commanded a 64.1% market share in the month, with diesel taking just 29.1%.

Meanwhile, the appetite for alternative fuel (AFV) vehicles grew 26.3%, gaining 6.8% market share. This performance supports the latest SMMT forecast for the sector – AFV demand is currently expected to rise more than a quarter by the end of 2019 to around 177,000 units. Some 86,000 of these cars are set to be ultra-low emission plug-in hybrids and battery electrics – taking the plug-in market share to around 3.7% as an ever-increasing number of models come on sale. However, this level is still at the lower end of government ambitions, underlining the need for greater purchase incentives and investment in charging infrastructure.

Mike Hawes, SMMT Chief Executive, comments: “It’s encouraging to see car registrations in January broadly on a par with a year ago as the latest high tech models and deals attracted buyers into showrooms. This, however, is still the fifth consecutive month of overall decline in the market. To restore momentum, we need supportive policies, not least on vehicle taxation, to encourage buyers to invest in new, cleaner vehicles that best suit their driving needs – from the latest petrol and diesels to an ever-growing range of exciting electrified vehicles. This would be good for the environment and good for the industry and those who depend on it.”

The drop of 1.6% in January is rather modest compared to the declines of recent months. This could be due to the ‘hangover’ effect of WLTP. Due to the implementation of the new emissions testing programme in September last year, vehicle manufacturers whose cars were not compliant at the time restricted supplies of certain models. This means that sales of many new cars are still filtering through to registrations and this is reducing any negative impact on demand caused by ongoing Brexit uncertainty. 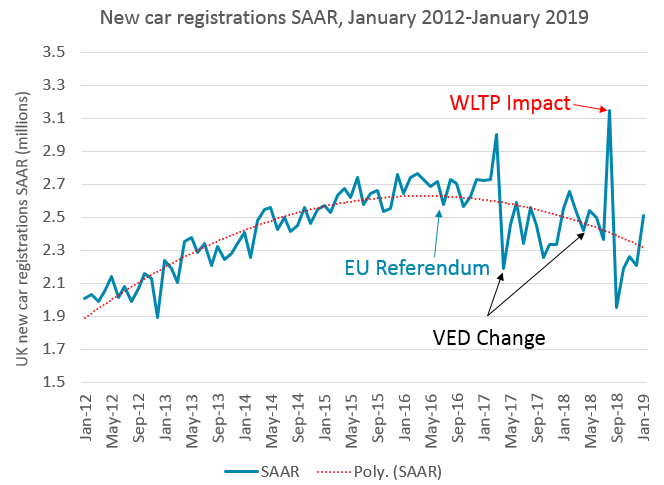 This highlights the comparative strength of the January results and is in line with Autovista’s outlook for the UK automotive sector.