The UK new car market is continuing to suffer, with a dramatic drop in diesel sales leading to a twelfth consecutive month of decline.

New figures released by the Society of Motor Manufacturers and Traders (SMMT) show that sales figures in March 2018 dropped by 15.7% compared to the same month last year. However, March 2017 was the biggest month on record for new car sales, as buyers seized the chance to purchase vehicles before new Vehicle Excise Duty (VED) rates came into force.

The SMMT states that despite this large drop, March 2018 still represents the fourth biggest since registration tracking began. As new 18 plate vehicles came to dealer forecourts, 474,069 units were sold, compared to 562,337 during 2017. That was the last month of sales growth in the country, representing a year of decline in the market, which is suffering due to economic and political uncertainty surrounding Brexit, together with the continued demonisation of diesel.

Drivers who are abandoning diesel technology, however, are not moving into alternatively fuelled vehicles (AFVs). This market saw growth of 5.7% in the month, representing an increase of 1,308 units. The field, which includes hybrid and electric vehicles, is growing its market share but not at a rate to worry petrol vehicles. For vehicle manufacturers, the shift away from diesel, and the slow uptake of electric and hybrid will only add to concerns over CO2 emissions and the potential of missing targets. 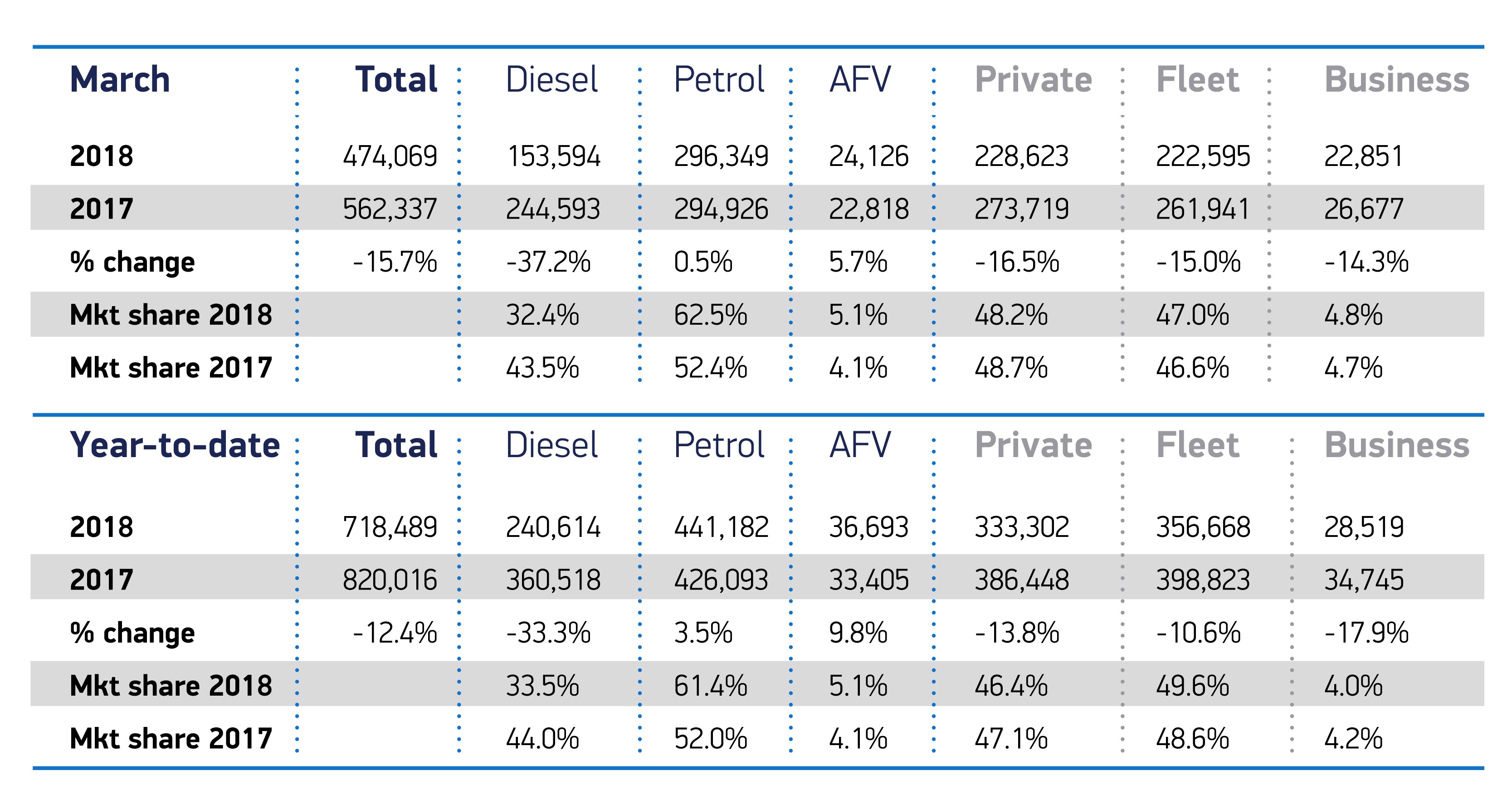 Demand from business, fleet and private buyers all fell in March, down 14.3%, 15.0% and 16.5% respectively. In terms of vehicle types, demand for dual-purpose cars remains the best performer in March, down -0.7%, with just 713 fewer vehicles registered than in the record March 2017. In the first quarter of this year 146,614 of these vehicles hit British roads, an increase of 2.7%, as the inclement weather appeared to lead to a boost in registrations.

Mike Hawes, SMMT Chief Executive, comments: ‘March’s decline is not unexpected given the huge surge in registrations in the same month last year. Despite this, the market itself is relatively high with the underlying factors regarding consumer choice, finance availability and cost of ownership all highly competitive. Consumer and business confidence, however, has taken a knock in recent months and a thriving new car market is essential to the overall health of our economy.

‘This means creating the right economic conditions for all types of consumers to have the confidence to buy new vehicles. All technologies, regardless of fuel type, have a role to play in helping improve air quality while meeting our climate change targets, so government must do more to encourage consumers to buy new vehicles rather than hang onto their older, more polluting vehicles.’