Autovista Group senior data journalist Neil King explores how Toyota has bucked the trend of declining revenues and deliveries in the first three months of 2020 and plans a pathway out of the coronavirus (COVID-19) crisis.

Toyota has weathered the COVID-19 storm better than other leading manufacturers, reporting 9.2% year-on-year growth in revenues in the first three months of 2020, which is Toyota’s fourth quarter for financial reporting (running from 1 January to 31 March 2020). Other leading OEMs reported lower revenues in the period, apart from the BMW Group, which posted growth of 3.5%. Toyota also replicated this superior performance in global deliveries, with consolidated vehicle sales only falling by 6.5% year-on-year. Other OEMs under review by the Daily Brief all suffered double-digit declines in the three months from 1 January to 31 March 2020. These firms have reported their first-quarter financial performance in this time frame. 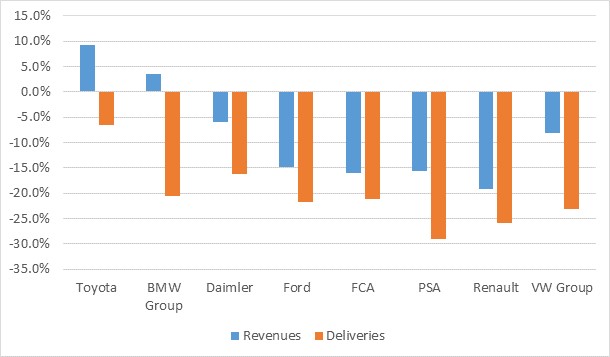 One clear advantage for Toyota has been their reduced exposure to the dramatic downturn in vehicle demand in Europe. Manufacturer definitions of the region differ in their reporting but Toyota generates a significantly lower share of its global vehicle deliveries in Europe than the other carmakers under review.

In Toyota’s statement for the financial year 2020, running from 1 April 2019 to 31 March 2020, the company reports that of 2,128,000 consolidated vehicle sales globally in January to March 2020, 259,000 were in Europe. This means that slightly more than 12% of total consolidated vehicle sales were generated in the region. For the other carmakers, equivalent European sales accounted for at least one quarter of their global tally – more than double that of Toyota. Given these OEMs’ exposure to Europe, it is also not a coincidence that PSA, Renault and the VW Group endured the greatest declines in global vehicle deliveries in the first three months of 2020. 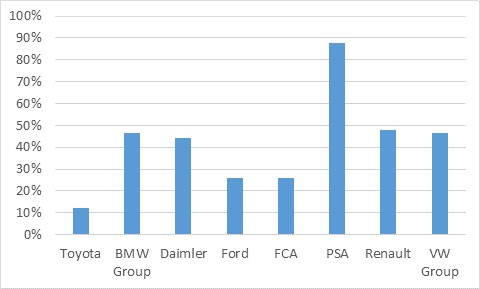 Despite its relatively smaller footprint in Europe, Toyota has fared better than all other major manufacturers in the region in terms of new-car registrations. The latest data for the EU, through to April, show that Toyota registered 24.4% fewer new cars in the first four months of 2020 than in the same period in 2019. By comparison, the market contracted by 38.5% overall and only BMW and Volvo also experienced volume losses of less than 30%.

This comparatively healthy performance in Europe may be attributable to the high representation of hybrid vehicles in Toyota’s sales in Europe, including the Prius (standard and plug-in hybrid), C-HR and hybrid variants of the Corolla, Yaris and RAV4.

As Europe emerges from lockdown, manufacturers with a strong electric-vehicle portfolio are expected to perform better than those without as EV consumers are less likely to be tempted by used cars instead of new. This is because they tend to be less price-sensitive buyers but there is also limited availability of the latest electric models on the used-car market. The COVID-19 crisis has, however, also delayed the launch of some new EVs.

Announcing Toyota’s financial results for its 2020 fiscal year in a press conference on 12 May, company president Akio Toyoda highlighted how the company has overcome numerous crises. These include the global financial crisis, the earthquake in Japan and flooding in Thailand, and the so-called ‘six hardships’ in Japan, among them the high value of the yen. ‘In overcoming them, I believe that our company has been able to gradually strengthen its corporate composition,’ said Toyoda.

For its current financial year ending March 2021, Toyota forecasts a reduction in its global vehicle sales of 1.95 million units, equating to a year-on-year decline of more than 20%. This would be greater than the decrease during the global financial crisis. The company expects to make a reduced profit, with an expected operating income of just 500 billion yen (€4.2 billion), down from 2442.8 billion yen (€20.7 billion) in financial year 2020 and a margin of 2.1%, down from 8.2%. This aligns with the latest BMW expectations, for example.

Beyond the immediate challenges the automotive industry faces, the economic impact of the COVID-19 crisis will inevitably lead to further cooperation to cut costs in areas such as the development of new technologies. ‘Also, with undergoing a "complete redesign" into a mobility company in mind, we are also engaged in recomposing our assets, such as by revising our cross-shareholdings and selling underutilised real estate,’ Toyoda commented.

A core message of Toyoda’s speech was to ‘become stronger together with our partners throughout the world.’

‘Our basic stance is that alliances are not for taking control of partners based on the logic of capital, but rather for respecting each other and for cooperating through work with like-minded partners. As a result, within an extremely short period of time, we have been able to establish a network with many partners, including those from other industries.’

Finally, Toyoda reiterated the rationale behind its commitment to domestic production of three million vehicles; ‘Based on our conviction that we need monozukuri (making things, or manufacturing) and a place to hone competitiveness that can drive global production in Japan, we have, indeed, held fast at all costs to protect our domestic production, no matter how severe the economic environment has been, including the ultra-high yen. We did this not only to protect Toyota but also to protect the enormous related supply chains and the jobs of the people involved.’

‘People are not costs’

In reaction to the economic impact of the COVID-19 crisis, Toyota does not plan to reduce employment and, ultimately, ‘domestic monozukuri’ to turn its results around.

‘Regardless of how big or how small they might be, there are many companies in Japan that have clenched their jaws and protected their human resources who had techniques and skills, no matter how tough times were, or, more importantly, because times were tough. I believe that now is exactly the time that we need a society that can support such companies. I humbly request that you support companies that have supported Japan and Japan's economy through monozukuri,’ Toyoda said.

Toyoda concluded his remarks by saying; ‘It could be that we have all been given a great chance. And that chance might be the last one. There is no crisis that humankind cannot overcome.’