Survey results: WLTP will cause a number of automotive issues in the coming months

Survey results: WLTP will cause a number of automotive issues in the coming months

WLTP has come into effect for all new vehicles sold in Europe. Any models built under the previous NEDC regime will need to be retrofitted, or pre-registered, so they are not applicable for sale as new from 1 September 2018.

However, what will be the biggest impact of WLTP on the automotive market? Autovista Group asked readers of the Daily News Brief for their opinions. Would artificial sales figures for August be the biggest problem, skewering yearly results, or would the financial impact, or the need to play catch-up in production by some manufacturers, prove a large issue? 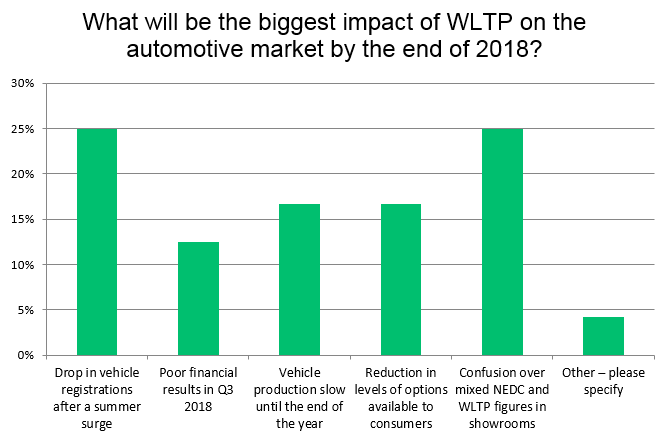 There was a tie for the top in our latest poll, with 25% of respondents choosing that a drop in vehicle registrations after a summer surge, together with confusion over mixed NEDC and WLTP figures in showrooms, would be the biggest impacts.

As we have seen in the UK registration figures for August, markets are starting to experience the impact of pre-registrations and discounting by manufacturers in an effort to keep existing stock which will be unsaleable after WLTP introduction relevant. August figures in Britain were up by 24%, and it is expected that sales in September will suffer as a result, much like in 2017, when the country introduced new vehicle excise duty rates.

In the meantime, there is still a crossover for vehicles to display NEDC figures, alongside those found in WLTP, while consumers get used to the new, higher emissions levels advertised as a result of the new procedure. There are concerns that the higher numbers will put consumers off as they do not understand what the higher levels mean, and will believe vehicles have just become worse in their pollution levels.

This poll also featured a joint second place, with 17% of News Brief readers choosing slow vehicle production and reduction in the number of options available to buyers. Certain manufacturers have announced that WLTP is producing bottlenecks in production lines as models are still going through the process, and cars are being re-engineered to meet the new regulations. There will then need to be a process of mass manufacturing to catch up, meaning certain other models produced on those lines could be slowed.

The need for all vehicle combinations to undergo WLTP also means manufacturers are spending much more time testing vehicles than under the previous regime. One way of getting around this is to reduce the options available or offer specific option packs. This would, therefore, reduce the level of customisation that consumers may have, which could impact sales.

A total of 12% of respondents felt that the biggest impact of WLTP would be poor financial results from automotive companies in Q3 2018, with Daimler, Volkswagen and supplier Valeo all suggesting that the test will affect their profits through the cost of testing and slowdown in vehicle production.

Finally, 4% of respondents suggested other implications would be the biggest factor, with all those commenting suggesting general confusion would be the issue, especially as some dealerships are still educating staff on WLTP and what it means, so they can pass knowledge over to customers.