Survey results: What will be the biggest barrier to mass autonomous vehicle adoption in Europe?

Survey results: What will be the biggest barrier to mass autonomous vehicle adoption in Europe?

Despite its importance, it has not been smooth sailing for the technology, with a multitude of roadblocks presenting themselves to challenge autonomous development. To find out which of these were the biggest barriers to the adoption of autonomous vehicles in Europe, Autovista Group surveyed our audience. 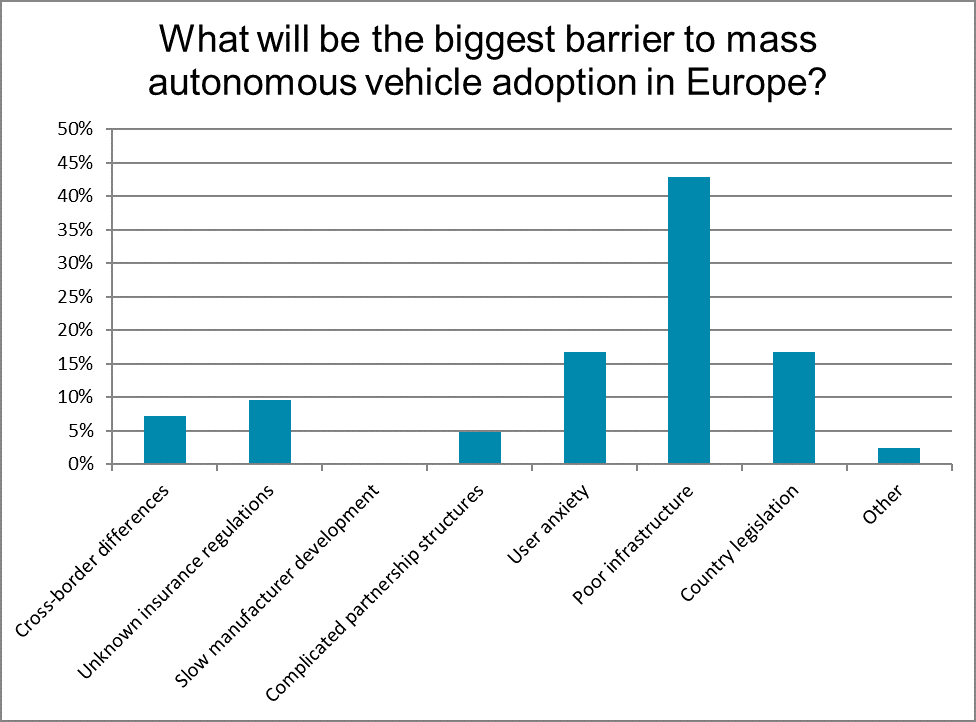 Taking the top spot with 43% of the votes was poor infrastructure. As roads, highways and cities have not been developed to support autonomous driving, this seems like a logical concern. Many situations that are easy for a human driver to interpret and, moreover, react accordingly, will be completely alien to the mind of an autonomous vehicle.

Also taking 17% of responses was country legislation. The EU has taken into account the unbiased nature of autonomous vehicles in its legislation and has even gone so far as to create a team of ‘ethical experts’ to decide what driverless cars should do in case of an accident. There is, however, clearly still a long way to go.

Partnership structures scored low on the list of concerns, with only 5% of the vote. The market has seen a number of OEMs teaming up, with the most recent example being BMW and Daimler. The two carmakers are working together to build smaller vehicles and also develop driverless systems.

Finally, unknown insurance regulations gained 10% of the votes. Many of the respondents still had a general mistrust of autonomous vehicles in general, showing that the industry might not be ready for the driverless future just yet.