The number of companies developing electric vehicles (EVs) in increasing, with traditional manufacturers being joined by some more leftfield companies. However, there is no escaping that while the technology is posting impressive sales increases in numerous markets, it is doing so based on very low volumes.

The European Parliament has now ratified stricter CO2 targets of 40% reductions by 2030, based on 2021 figures. This means the development of EVs must continue and must do so quickly. But all the development in the world cannot secure a mass-market if the public is not willing to buy.

Autovista Group asked readers of its Daily News Brief what they felt would make EVs more appealing to the general public, encouraging them to buy into the technology. We wanted to know what was needed so manufacturers could start to build their EV futures. 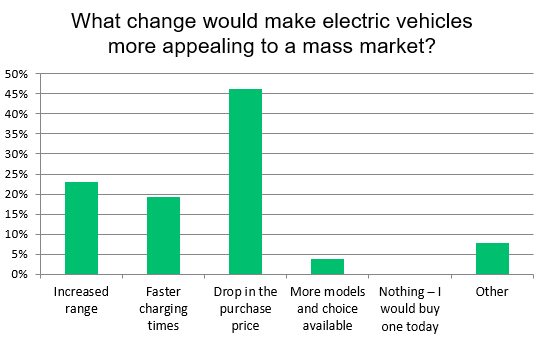 Leading the way with 46% of the vote was the need to drop the purchase price of EVs. As the technology is new, many manufacturers have to outsource the supply of various components, such as batteries. Additionally, as there is no real mass-manufacturing of these units, they are very expensive, adding to the overall cost of the vehicles. For example, the Nissan Leaf is around €28,000, while the cheapest Ford Focus is averaging €18,000. Buyers are put off by the higher prices despite the potential savings in fuel costs.

Second in the poll, some way behind with 23% of the vote, was the need for manufacturers to offer an increased range, a move that some are starting to offer. While the previous generation Leaf offered a realistic driving range of 80 miles, Nissan now claims around 164 miles, as tested in WLTP. This is still half of what a full tank of petrol would offer in a conventional car, and much less than a diesel vehicle. Therefore, drivers completing many miles would need regular stops.

Next came faster charging times, 19% of respondents choosing this option. Currently, a fast charge is around 30 minutes, still much longer than filling up a fuel tank, while also offering around an 80% charge, meaning drivers are stopping even more frequently on long journeys. Improving charging times through fast chargers up to a full or near-full charge will give consumers the option of using their vehicles in the manner in which they are accustomed to.

The ’other’ category gained 8% of the vote as respondents suggested that increases in infrastructure around Europe would be the key to making EVs mass-market. Others felt that the only way to improve sales was to increase restrictions on internal combustion engines, effectively forcing the market to decrease.

Finally, 4% of voters suggested that more models and choice would make EVs mainstream, a move that is starting to come to fruition with manufacturers jumping on the bandwagons. Alongside Nissan and Renault, market leaders in the technology, luxury brands such as BMW, Audi, Mercedes-Benz and DS Automobiles are launching, investing or have recently launched EV models, while Smart will become an electric-only brand and others are investigating the potential, with plans to launch numerous vehicles in the next five to ten years.