Survey results: Hydrogen could be the answer to CO2 issues

Survey results: Hydrogen could be the answer to CO2 issues

Vehicle manufacturers should be looking towards hydrogen to help them meet stricter European CO2 targets, according to readers of Autovista Group’s Daily News Brief.

With a 30% reduction of current targets by 2030 planned - a proposal that has cleared its first hurdle in an important EU vote - manufacturers need to develop new technologies as they already look likely to miss recommended CO2 limits by the current 2021 deadline. 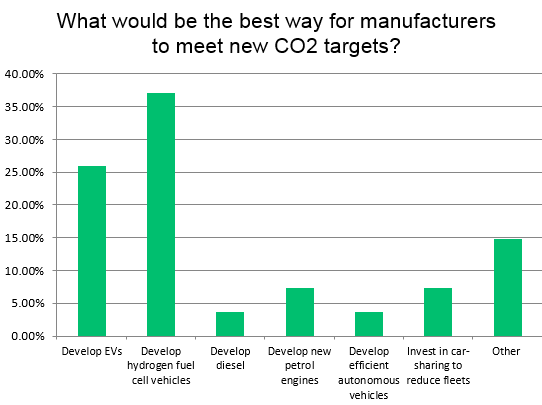 But rather than electric vehicle (EV) technology, hydrogen came out on top in our recent poll, asking what would be the best way for manufacturers to meet new CO2 targets. 37% of respondents felt this was the best way for the industry to go, compared to 26% suggesting the development of EVs would be best.

Hydrogen can offer similar ranges to petrol vehicles between filling up, with this itself taking minutes, similar to fuelling a petrol or diesel vehicle. Additionally, the only emissions produced are water vapours, a by-product of the reaction that creates electricity to power a vehicle. Those commenting on the poll said that hydrogen was a long-term solution, with EVs only a ‘stop-gap’ measure.

15% of those answering the question had their own view on what manufacturers should concentrate on, and these followed similar themes. Many suggested that hybrid development should be key, with mild hybrids and 48-volt systems the way to go. Others suggested that weight-saving would help reduce CO2 output, with certain components removed and more carbon fibre required, which would improve fuel economy and therefore help traditional petrol and diesel engines.

Two options secured 7% of the vote, developing new petrol engines, and investing in car-sharing schemes to reduce a manufacturer’s fleet. Mazda is one company looking at the petrol engine, with its new Skyactiv-X touted as the ‘most efficient engine’ and comparable to diesel, while a number of carmakers are already looking at improving their ride-share offers, with BMW and Daimler merging DriveNow and car2go, although this is to combat a change in ownership trends.

Finally, 4% of respondents felt that the development of diesel engines would improve CO2 levels. The downfall of this technology is mainly to blame for manufacturers missing current targets. Many had relied on diesel sales to keep pollution levels down, as diesel emits less CO2 than its petrol counterparts. However, declines in sales mean more drivers are turning to petrol engines. Bosch recently announced a new diesel development using existing technologies that would reduce problematic nitrogen oxide (NOx) emissions, meaning diesel would be cleaner than petrol once again.

A final 4% suggested that autonomous technology was the answer, suggesting that while computers may be able to drive vehicles more efficiently, it was not the correct answer with electric, and especially hydrogen technologies on the table.