Motorsport is a tried and tested proving ground for new technologies, but with many different forms, Autovista Group wanted to know which was the best series for manufacturers to use for road car development.

Respondents to the latest Daily News Brief survey believed that Formula 1 was still the way to go for technology development. Currently, the series is using 1.6-litre turbocharged hybrid engines with two energy recovery units; the MGU-K which stores energy from kinetic energy released under braking, and the MGU-H which develops energy from wasted heat expelled by the turbo. Drivers can then use this stored energy, giving them a 250bhp boost each lap of a Grand Prix.

Additionally, there are many other technologies and materials in Formula 1 cars that help the development of road cars, and this is true of the series in the past. Carbon fibre, traction control and active suspension are just recent examples. Many of the respondents to the Autovista poll highlighted that as the series is the ‘pinnacle of motorsport’ then technology innovations are likely to be more recognised.

One of the newest motorsport series and perhaps the most talked about, Formula E came second in the Autovista poll, with 29% of the vote. The only full-electric single-seater series, Formula E currently sees drivers swap cars halfway through a race due to limited battery range. However, for the 2018/19 season, new technologies will see this procedure eliminated with cars able to last the entire distance. Many manufacturers have flocked to the series since it launched, and currently, Porsche, Audi, Jaguar and DS Automobiles compete, with Nissan joining them next season. All these carmakers are using the platform to highlight their green and electric vehicle (EV) credentials, while partnerships with technology companies allow development of the new electric powertrains.

Third in the poll was RoboRace, an upcoming series for autonomous vehicles. With 16% of the vote, the reason for people choosing to vote this way may be obvious; the platform will help to push the development of autonomous technology. RoboRace will run the support circuit with Formula E once development is complete, and the series is still signing up partners.

Touring cars came next with 7% of the vote, with power and performance a key area in saloon car racing, while the World Endurance Championship (WEC) came in with just 4% of responses. While races last for six, 12 or 24 hours, the hybrid cars used by manufacturers (currently just Toyota) still have to make numerous pit stops for refuelling. However, Toyota has suggested that the development of its hybrid systems in WEC have filtered into its road cars in recent years.

The last 3% of voters ticked other, and the consensus was that the World Rally Championship (WRC) is important. Like Touring Cars, the focus here is on performance and power, yet the rules in rallying are stricter, with limits on fuel flow, engine size and performance gains, meaning manufacturers taking part have to develop fast to remain competitive.  The IndyCar series in the US was also suggested. 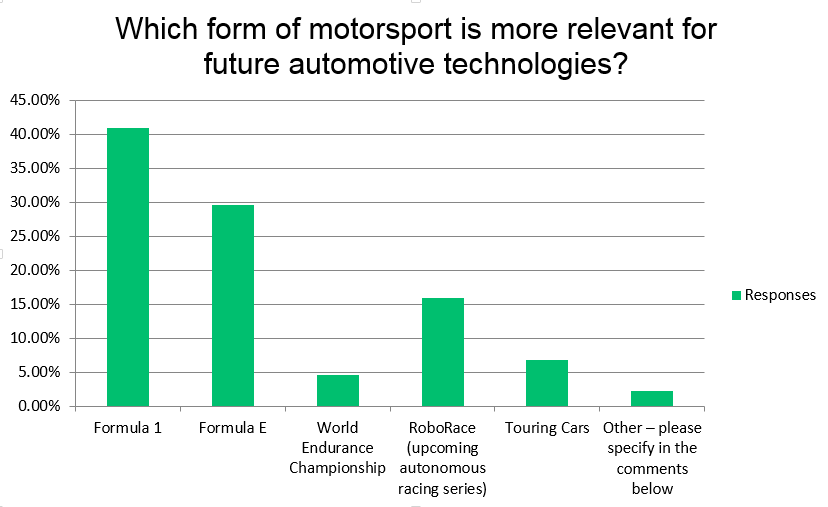