The newly-formed Stellantis group, which encompasses 14 brands, plans to generate 38% and 70% of its European passenger-car sales from electrically-chargeable vehicles (EVs) in 2025 and 2030 respectively. This is a significant increase on the 14% EV-share target for the current year.

The world’s fourth-largest carmaker (formed through the merger of the PSA Group and Fiat Chrysler Automobiles (FCA)) also aims for 98% of its available vehicles in Europe to be offered with an EV variant in 2025, up from 40% planned for this year. By 2030, the group aims to offer a battery-electric vehicle (BEV) variant of all its European models, and will cease to offer plug-in hybrid (PHEV) versions. In the US, 96% of the group’s models will be electrified by 2025. As in Europe, Stellantis wants to offer a BEV version of all models by 2030.

The timing for the electrification of the entire Stellantis model range is slightly behind that of the constituent PSA Group. In January 2018, CEO Carlos Tavares outlined the French manufacturer’s plans to bring electrified options to its full car and light-truck line-up by 2025. And only last month, the core Peugeot brand announced plans to make its range of passenger cars and light-commercial vehicles (LCVs) 100% electrified by 2023.

Stellantis’ timeline roughly aligns with Ford’s plans, for example. However, the US carmaker’s entire European passenger-vehicle offering is set to be zero-emissions capable by mid-2026. This means all Ford models sold in the region will be either BEVs or PHEVs within roughly five years. Ford then wants to step up its game by the end of the decade, offering only fully-electric models by 2030.

BMW’s Mini brand is forging ahead even quicker, with 90% of the market segments it serves to feature a BEV option by 2023. BMW Group has also stated that it plans for the marque to become fully-electric by 2030.

In order to achieve the new targets, Stellantis will introduce four electric platforms by 2026. The company said that these would cover all market segments and all regions in which it operates. 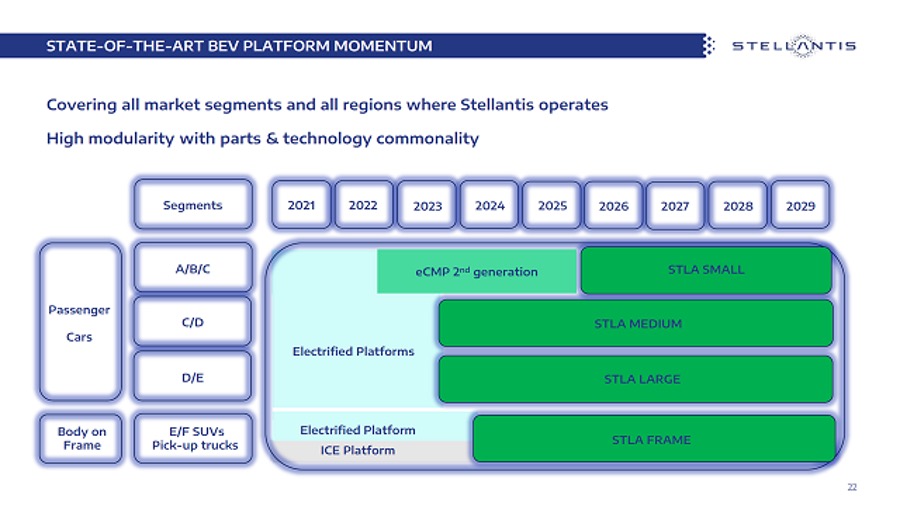 The STLA Medium (covering C to D segment cars) and STLA Large (covering D to E segments) platforms are planned for late 2023, followed by the STLA Frame platform in early 2024, which will provide the body-on-frame underpinning for pick-up trucks and E- and F-segment SUVs. Finally, the STLA Small platform (covering A to C segment cars) will replace the second-generation eCMP platform from the start of 2026. This also suggests that Stellantis may not launch any new internal-combustion-engine (ICE) vehicles beyond 2026. 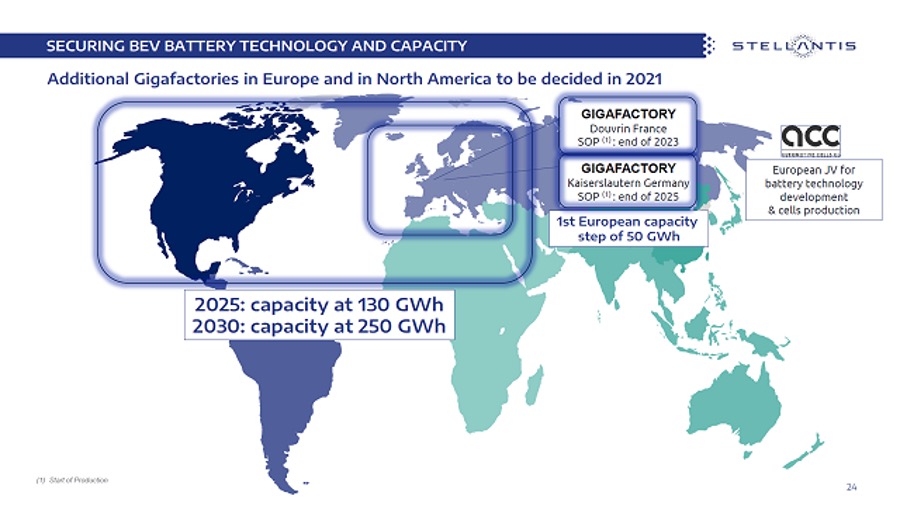 The previously-announced battery facility in Douvrin, France, will start production at the end of 2023, in a ‘first European capacity step of 50 GWh.’ Total capacity is planned to increase to 130GWh in 2025, with a second plant in Kaiserslautern, Germany, coming on stream at the end of that year. However, Stellantis will also decide on additional gigafactories in Europe and North America this year, with plans to further increase combined capacity to 250GWh in 2030.