The resilience of diesel in the UK used car market

The resilience of diesel in the UK used car market

The emergence of the diesel emissions scandal in the autumn of 2015 seemingly wrote the epitaph for diesel engine cars. To some extent, the UK Government continues to put pressure on new diesel car sales with the introduction of new legislation.

The effect has been stark. At the sales peak, more diesel cars were sold than petrol and alternative fuel vehicles (AFVs) combined. With significant bad press, increased Vehicle Excise Duty (VED) and benefit-in-kind taxation changes, the erosion of diesel car sales has been rapid. As shown in the chart below, so far this year, just under one in three new cars sold use diesel power according to data from the SMMT. 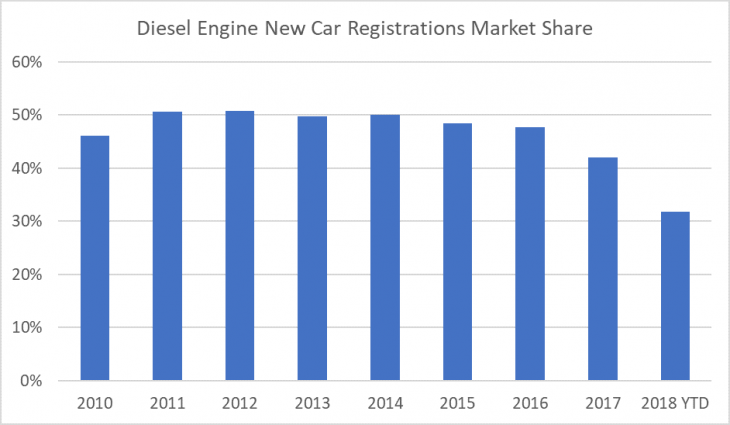 An unintended consequence, however, is that average new car CO2 levels increased in 2017 for the first time in two decades. This is as a direct result of fewer new diesel car registrations leading to the Government accepting that diesel still has a part to play in reducing CO2 levels.

Diesel in the used car market

The chart below shows Glass’s Trade values expressed as a percentage of original cost new price for cars up to 5 years old. It shows little change for diesel cars over the past three years. However, with increased retail demand, there are increases for both petrol and AFVs due to short supply in the wholesale market.

The fast pace of price rises for petrol and AFVs is having an impact on conversion rates in the wholesale market. Despite the negativity towards diesel, through the summer months they have outperformed petrol cars and AFVs. The chart below shows the first time conversion rate of cars between 2.5 and 4.5 years of age.

It appears that used retail customers still view diesel cars as a more attractive value proposition as they are cheaper to buy and run than their petrol equivalents. These are still key drivers for retail consumers, often outweighing all other considerations.

Looking ahead, Glass’s predicts a shortening supply of used diesel cars but, conversely, an increase in supply of petrol and AFVs. So we should expect a firming of diesel prices unless retail demand weakens with increasingly negative legislation.