Out of more than 50 major competitors spending billions of euros in the race to create autonomous software for cars, most will be entirely eliminated over the next decade, a major study finds. John Hoffecker, global vice chairman of consultancy AlixPartners, which conducted the study, said: ‘90% of the investments, where people are spending tens and hundreds of millions-plus, will be completely thrown away.’ The same fate is expected to befall the vast majority of players in the ridesharing race as well as in connected car technologies.

Carmakers that fail will have to buy the technology from the winners, and lose a lot of high-value revenue in the process – as well as for the first time in their histories, losing control of their core driving systems.

Hoffecker added: ‘You've got 50 major players trying to develop autonomous software and you'll probably get three or four of them who will win. There will be billions and billions of dollars lost in bets that were put in the wrong place.’

Traditional carmakers face the intimidating prospect of taking on tech giants including Google parent Alphabet and Apple, companies filled with much of the brightest talent in the artificial intelligence fields closely associated with autonomous vehicle technologies, as well as experience working closely with the startup scene where many tech innovations originate. The core talents of OEMs are traditionally in hardware, meaning they have a giant hill to climb in building up their nascent software teams to compete – as well as forging alliances and learning to nurture startups in the race to fill the abyssal gap.

Hoffecker stressed: ‘Whoever can get to autonomous first will have a major advantage.’

However, one ray of hope AlixPartners argues is that it is currently impossible to predict who will ultimately be the autonomous vehicle winners. Those currently thought to be leaders in the field, such as Alphabet Google sister brand Waymo, are not necessarily shoe-ins. This is, the study says, because so much will change over the next eight years as self-driving cars arrive – in part since other major factors are also at play, such as the expected gigantic rise in electrified cars (especially in China – where nearly 50% of electric car models are expected to be fielded by 2020).

In addition, by 2025, the cost of producing a self-driving car will dive by 78%, and in tandem electric vehicles (EVs) will achieve price parity with traditional combustion engine powertrains, the study estimates. These dates are in line with other estimates.

Hoffecker said: ‘There are going to be major changes in who is on top and who is not on top, overnight,’ underlining that nimble carmakers that are able to quickly and successfully adapt to new technologies, as well as navigating traditional industry problems (including emissions) will ultimately be the most successful.

His comments match that of Porsche, which believes the carmakers of the future have to become internet companies to stay at the forefront in the connected age.

He concluded: ‘The big winner in the future is going to be this person who can figure out how to change their organization into more of a consumer electronics kind of business than what we've seen. Where they think about their business in one-, two-, three-year cycles; not four-, eight-, 10-year cycles.’

As such, new recurring revenue streams will be fundamental to future industry growth, particularly in infotainment and other connected services – for example, Toyota’s investment in a Finnish startup some have called the ‘Netflix of Transportation’.

However, autonomous is not the only emerging tech field where many investing players risk losing out. Ridesharing is also a field many carmakers have made bets on that have generally not yielded the levels of success many had expected, according to the study.

This includes recent car sharing investments such as Daimler’s Car2Go and Avis’ Zipcar, although the latter’s fortunes may improve following a deal with Waymo.

The report finds out that in ridesharing, many car sharers have recently lost out to ride hailing firms such as Uber and Lyft, which are rapidly growing and taking the vast majority of the current ridesharing market.

Global co-head of the automotive industrial practices at AlixPartners Mark Wakefield said: ‘Ride-sharing has really taken over. Not only have they taken quite a cut out of taxis, but car-sharing itself.’

There is a silver lining for this in relative terms for car manufacturers, however, although not for congestion. According to the report, this move towards ride hailing will reduce the hit taken to new vehicle sales from the current ride of ridesharing services, since the study estimates that every car sharing vehicle replaces the need for 19 personal vehicles, whereas each ride hailing vehicle only replaces four cars or trucks on the road.

If carmakers are to be among the few who succeed in such emerging fields against the competition of the tech giants, it seems that big alliances, a nimble approach and working closely with the startup community is the answer. 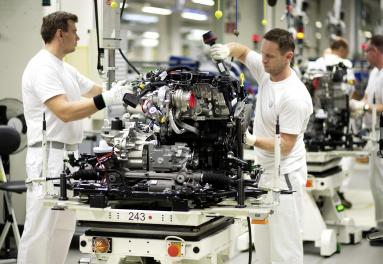