October shows EU new car market could be positive in 2019

October shows EU new car market could be positive in 2019

Registrations of new passenger cars in the EU grew by 8.7% year-on-year in October, with 1,177,746 units registered, according to figures released today by the European Carmakers’ Association, ACEA. Although this positive result is against a low base of comparison in October 2018, when demand contracted by 7.3% year-on-year following the EU-wide implementation of WLTP, it is the highest October total on record since 2009.

Nearly all EU new car markets posted increases in October - Cyprus and the UK were the only exceptions. New car registrations enjoyed healthy growth in France (+8.7%), Germany (+12.7%), Italy (+6.7%) and Spain (+6.3%) as the markets corrected themselves after the losses in October 2018. In all these markets, the magnitude of growth is clearly linked to the extent of the decline in October 2018. However, new car registrations tumbled by 6.7% in the UK, despite a 2.7% contraction in October 2018, as economic and political uncertainty surrounding Brexit continue to impact confidence. 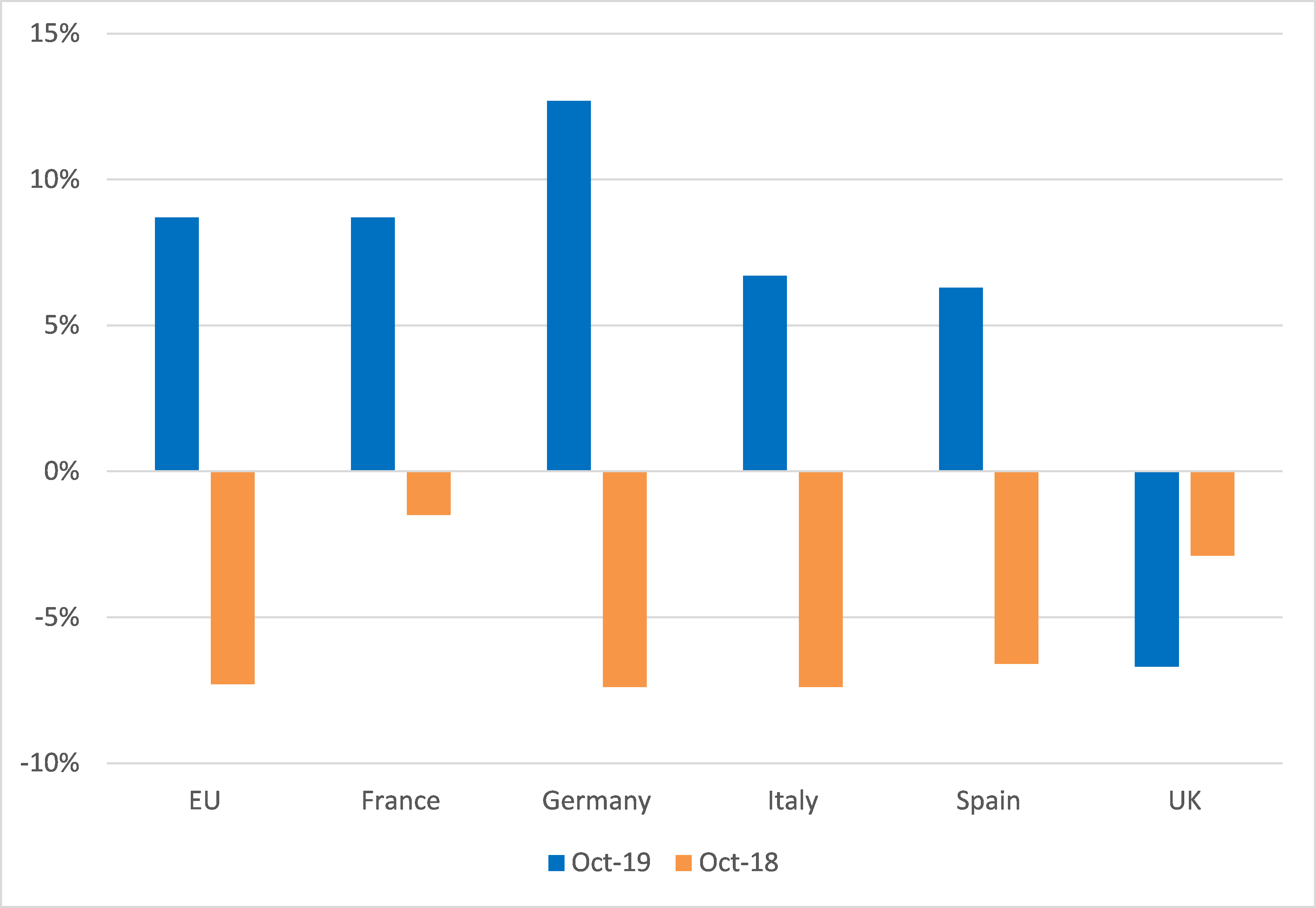 Despite the growth in demand in October, new car registrations were still 0.7% lower in the first 10 months of 2019 than in the same period in 2018. Germany is the only one of the five major European markets to record growth so far in 2019, up 3.4% year-on-year. France and Italy are below the level achieved in the first 10 months of 2018, but are both only down by less than 1%. Spain and the UK have suffered the greatest declines in the year-to-date, down by 6.3% and 2.9% respectively. 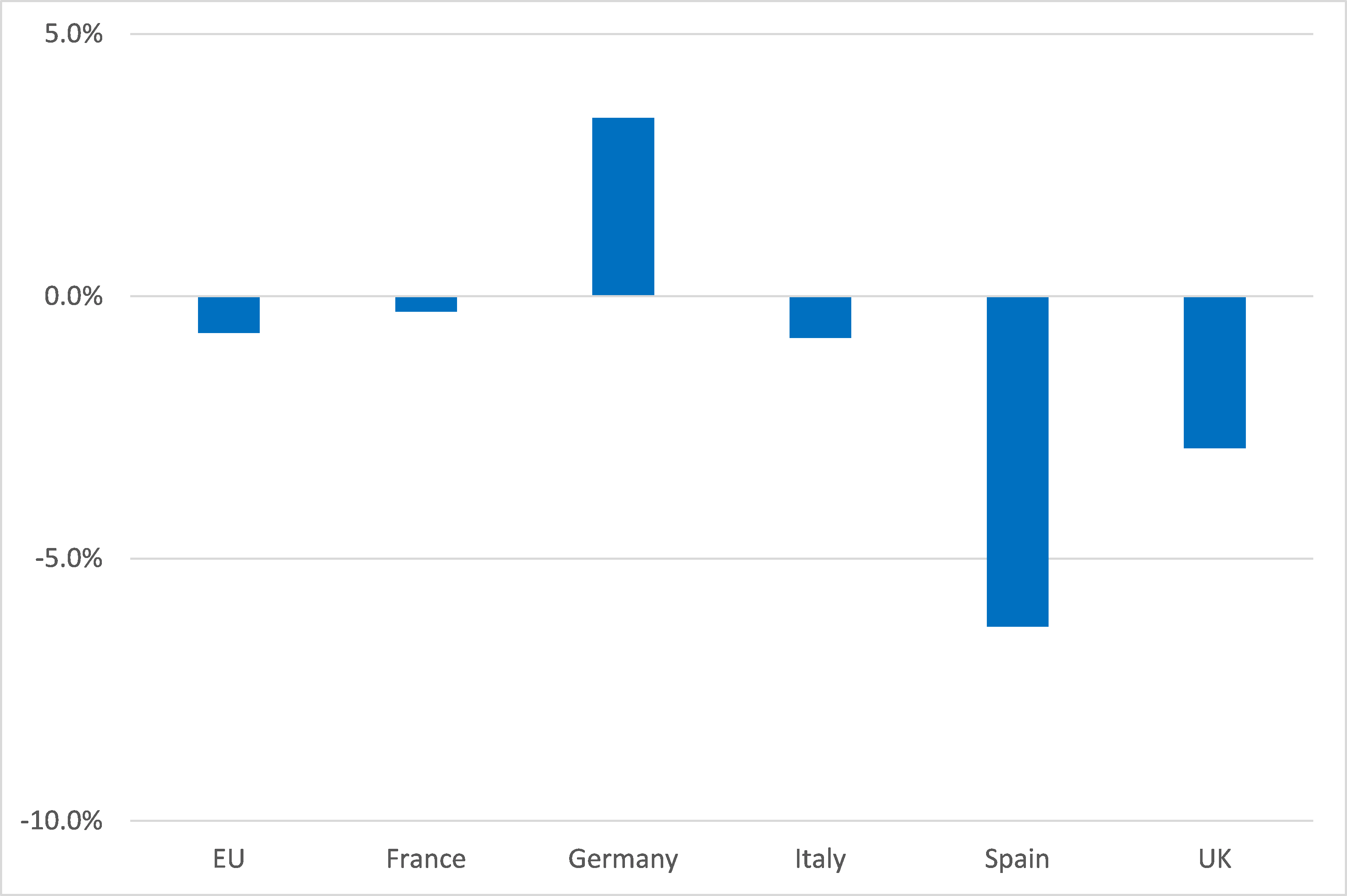 Further growth in new car registrations is to be expected in November and December, given the ongoing WLTP-induced weakness at the end of 2018, and this may be enough to push France and Italy into positive territory in 2019. In turn, the EU new car market may yet finish 2019 up on 2018 but Autovista Group forecasts that demand will continue to be weaker in the UK and so it will be a close call.

Volkswagen Group (VW) again enjoyed the highest gain in October, but this was expected as VW took the biggest hit following the introduction of WLTP in September 2018. Registrations of new VW cars surged by 30.8% year-on-year in October. The Audi brand performed best, up 66.5%, and the core VW brand was up 29.5%. For the first 10 months of the year, the VW Group was up 0.9% overall, despite weaker results from Audi and VW, as the Skoda and SEAT brands have enjoyed growth of 3.2% and 10.5% respectively.

Renault Group also enjoyed a healthy gain compared to October last year. The French carmaker saw sales rise 13.2% across all its brands, although it remains 1.0% down year-to-date. Registrations of new PSA Group cars fell 5.1% year-on-year in October but the carmaker was one of the most prepared for WLTP and therefore saw less of a sales dip last year. In the year-to-date, PSA Group sales in the EU are down, albeit by only 0.5%, and it remains the second biggest carmaker in the region.

BMW Group sales increased by 2.5% in October, helping the company’s sales stay positive in the year-to-date, up by 0.4%. Daimler suffered a slight contraction in EU demand in October, of just 0.02%, but has registered 3.8% more cars in the EU so far in 2019. Fiat Chrysler Automobiles (FCA) saw registrations growth of 2.7% in October but is 9.2% down in the first 10 months of 2019 due to its exposure to the weakness of the Italian market. Nissan reported positive sales growth in October, of 3.7%, but continues to struggle. The beleaguered carmaker has registered 23.4% fewer cars in the EU in the first 10 months of 2019. This is the greatest loss of all carmakers and Honda is the only other manufacturer that has suffered a double-digit decline so far in 2019, with sales down 13.1%.