New car sales continued to struggle across Europe in March

New car sales continued to struggle across Europe in March

Across the continent, the market contracted by 3.9%, falling from 1,792,880 units in the same month last year, to 1,722,442 last month, according to the latest figures from the European Automobile Manufacturers Association (ACEA). 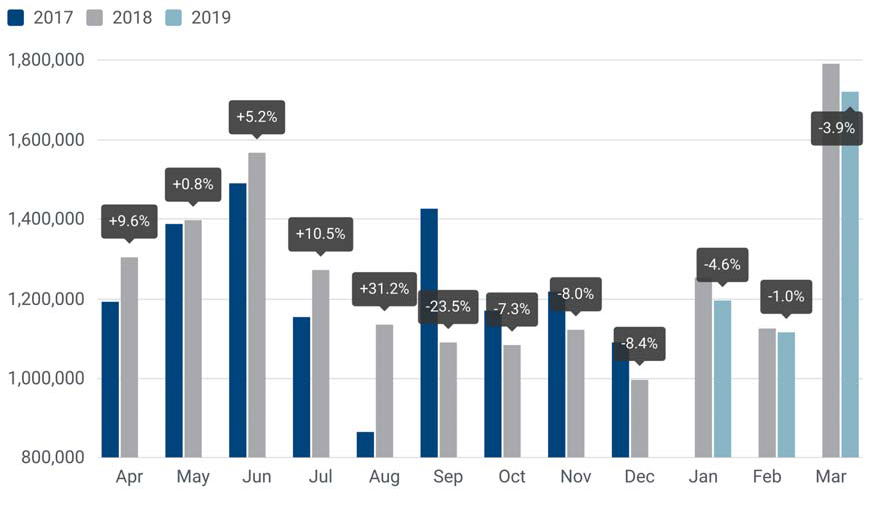 All of the big five markets suffered, with the biggest drop in sales coming from Italy, which found its registration figures down by 9.6% year-on-year as a result of the introduction of a new car tax system. Spain’s market fell by 4.3% while the UK suffered a 3.4% loss. French sales dropped 2.3%, while Germany performed best, falling by just 0.5%.

Three months into 2019 and Europe’s new car market has contracted by 3.3%, continuing a struggle seen since the introduction of WLTP in September last year.

While February promised some hope of a slight recovery, with sales only 1% down across the entire continent following a 4.6% drop in January, the latest numbers have put more pressure on manufacturers in Europe.

So far, in the first quarter, only Germany has posted a sales increase, although the modest 0.2% rise represents stability rather than growth. Spain and Italy are the worst performers compared to the same period in 2018, down 6.9% and 6.5% respectively. The UK market has fallen by 2.6%, while France has remained stable with a small loss of 0.6%.

Volkswagen (VW) Group saw a smaller decline than recent months in its March sales. The group dropped 1.1% across all its marques, with the core VW and Skoda brands down 3.3% and 1.2% respectively. In a sign that supplies are recovering following issues surrounding preparations for WLTP, Audi sales increased by 1.7%, a better performance than its 7.2% loss in February. So far this year, sales for the Group are down 2.2%, with Audi posting a 6.6% loss.

Citroen’s performance, with sales up in March by 7.4%, helped to limit the drop at PSA Group to just 1.4%, with other brands suffering. The group has suffered a 0.9% decline so far this year. French rival Renault Group saw its figures rise last month, a 2.3% increase coming thanks to a 22.2% rise in Dacia registrations. The company is up 0.8% year-on-year.

Ford continues to struggle in the European market, with March registrations falling 15.5%, leaving the brand 10.2% down so far this year. Nissan too continues its sales woe, with shipments dropping 28.4% last month. The carmaker is 26.9% down in the first quarter.

REE and Magna to collaborate on modular-electric vehicles