Insight: VW hopes residual values will stabilise as a result of the diesel scrappage incentives

Insight: VW hopes residual values will stabilise as a result of the diesel scrappage incentives

Automobilwoche reports that Volkswagen (VW) hopes the residual values of its used diesel cars will stabilise with the introduction of trade-in bonuses for owners of older diesel cars which only comply with emissions standards Euro-1 to Euro-4. ‘We are thus relieving the market,’ Germany sales and marketing manager Thomas Zahn said in a telephone conference on Tuesday (8 August). As older diesel cars that are traded in will be scrapped, used car supply is reduced and so residual values should increase, which is one of the objectives of the incentive scheme according to Zahn.

Zahn said that the number of diesel vehicles in Germany that meet the Euro-1 to Euro-4 emissions standards and are therefore eligible for the VW trade-in bonuses amounts to 6.4 million cars, according to information from the KBA motor vehicle authority. Although Jürgen Stackmann, board member of the VW car brand with responsibility for sales, did not say exactly how much the diesel scrappage scheme is likely to cost, it is reported to be a ‘significant’ million-euro amount.

Although the trade-in bonuses offered by VW depend on the model being purchased, to provide an idea of the potential costs involved, Autovista calculates that if 5% of the 6.4 million eligible car owners, i.e. 320,000 customers, decided to trade in their older diesel car for a new EU-6 compliant Golf diesel, they would each receive a €5,000 bonus and the total cost to VW would be €1.6 billion.

As Automobilwoche further reports, ‘the development of the residual values ​​is important not only for diesel drivers, but also for the balance sheets of carmakers. Because of the number of leasing contracts, companies are at risk if the cars are declining in value because they are de facto the owners of the leased cars. Up to now, the German car owners have been pointing to largely stable residual values ​​in their diesel fleets despite discussions on driving bans and the diesel exhaust gas affair.’

On the subject of residual values in Germany, their stability is broadly confirmed by the unweighted average trade values of petrol and diesel cars as a percentage of their list price after 36 months and 90,000 km. However, the downward trend of diesel residual values continues, as previously highlighted by Autovista Group’s German division Schwacke in June. The trade values of petrol-powered cars have stabilised at around 38% percentage of their list price after 36 months and 90,000 km and although this is lower than the 42% average being achieved by diesels, the gap has narrowed to four percentage points compared to a difference of five percentage points when the emissions scandal first broke in September 2015. However, as discussed in June, other factors are affecting the stronger performance of petrol used cars, including an increasing supply of young used diesel cars in Germany resulting from the growing fleet market of recent years. 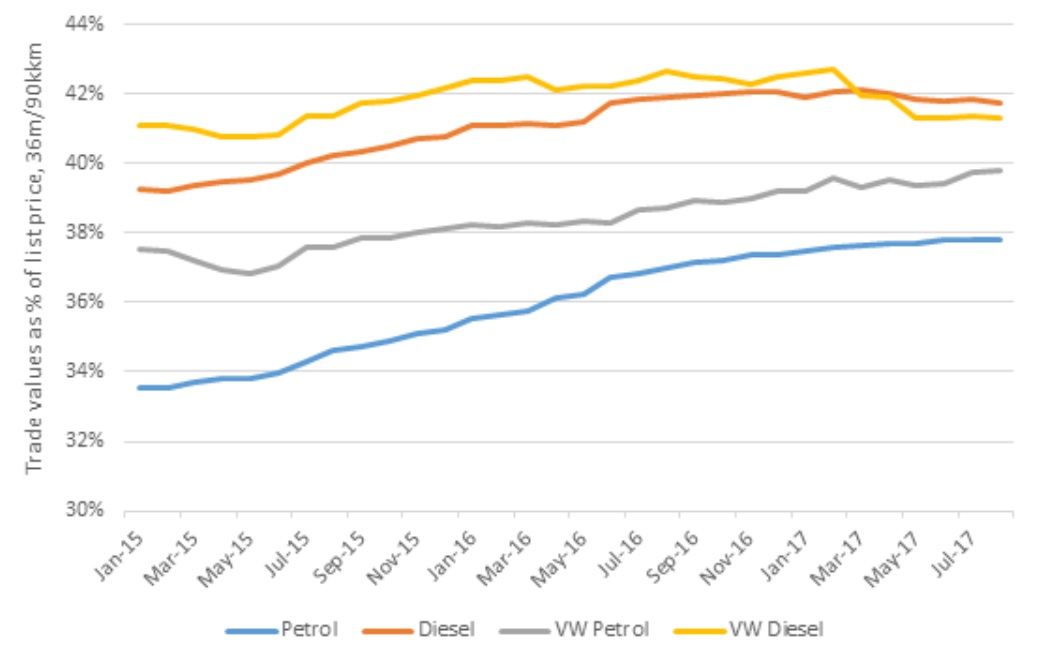 For the Volkswagen brand, the average unweighted residual values for petrol cars continue to mirror the used value development of petrol cars overall. However, Autovista data reveals that the trade values of VW diesels as a percentage of their list price after 36 months and 90,000 km have been slipping since February 2017, when they achieved 43%, and have now fallen to 41% - below the overall 42% average value retained by diesels in Germany. It is therefore understandable that VW hopes residual values, especially of their diesel cars, will stabilise as a result of the announced software updates for newer used diesels and the trade-in bonuses available for owners of older used diesels. However, other issues such as potential diesel driving bans are of course beyond VW’s control, although these have been averted for now.