The UK’s used car market will enjoy a healthy supply of three-year-old cars given the rapidly recovering new car market between 2014 and 2016. Used car demand is expected to remain buoyant in 2017, especially given the challenges the new car market faces. Nevertheless, forecasting residual value developments in the UK is incredibly difficult for two reasons. First, the country remains clouded in economic uncertainty, with the triggering of Article 50 to commence the formal process of Britain’s departure from the European Union (EU) still scheduled to occur before the end of March. Second, from 1 April, new vehicle excise duty (VED) rates will be introduced which bring sweeping reforms to the current road tax system for new cars.

The result of the referendum to leave the EU in June 2016 had no discernible impact on new and used car sales in 2016, which grew by 2% and 7% respectively. The new car market also weathered the storm in January, with registrations up by 3% compared to January 2016. In February 2017, UK new car registrations fell year-on-year by 0.3% but this can be largely attributed to one less working day compared to the leap year in 2016.

SMMT chief executive Mike Hawes said: ‘February is traditionally one of the quietest months of the year and a steady performance was expected following another year of record growth in 2016.’ Hawes expects March figures to bounce back due to the new 2017 number plate and ahead of the hike in VED rates from 1 April.

This bounce back may not materialise: the Brexit vote has already exerted inflationary pressure on consumer goods, which will force households to tighten their budgets. New car prices are also expected to rise further due to the weakening of the pound and in the short term, new car sales will certainly be impacted by the new VED regime. One industry contact at a carmaker commented that ‘we will all end up paying more for our cars’.

Under the current tax system, road tax is calculated based on levels of CO2 emissions, with cars emitting up to 130g CO2/km paying no tax in their first year. The fact that an increasing number of models are eligible for this tax exemption has prompted the UK Government to amend the rates in order to boost tax revenues. From 1 April, only cars with zero emissions will still be tax-exempt and the VED rates will increase for all other vehicles. This is expected to pull new car demand forward into the first quarter from later in the year. As it stands, the SMMT forecasts that new car registrations will decline by 5% in 2017 but Autovista Group division Glass’s is less bearish, predicting a decline of 3.5%. Either way, the change in the VED tax regime is not applied retrospectively and so could actually be a positive for used car sales, as consumers baulk at the new tax rates. 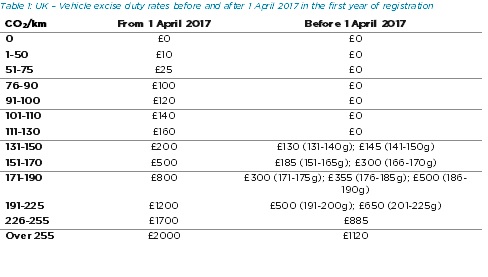 Intriguingly, vehicles with emissions of between 76 and 130g CO2/km will be subject to a higher increase in the VED than those which emit between 131 and 150g. Given this, residual values of A and B segment cars, which typically emit less than 130g CO2/km are expected to hold firm as price-sensitive private consumers turn to used car options instead.

However, C-segment models, which more commonly fall in the 131-150g CO2/km band, are less likely to suffer as far as new sales are concerned and without a defection by consumers to used cars, their residual values may be under more pressure. As for the larger D and E segments, they will be subject to the most significant tax increases. For example, cars emitting between 191g and 200 g CO2/km will be subject to a new VED rate of £800 from 1 April, up from £300. For cars emitting between 176g and 185g CO2/km and between 186g and 190g, the uplift will be actually be lower at £445 and £300 respectively. The highest increases are understandably applied to cars emitting more than 191g CO2/km, but do not differ significantly, ranging from a £550 hike for cars with emissions of 201-225g CO2/km to £880 for those emitting more than 255g CO2/km.

Conventional wisdom suggests that this means that cars in the upper echelons of the market could become more attractive as used offerings and so their residual values should hold firm. However, at this end of the market, these costs equate to a negligible share of the cars’ list price and new demand is therefore expected to be resilient, with used values potentially under pressure.

The biggest impact of the VED hikes on the new car market is likely to be on the smaller, least-polluting offerings. However, they will continue to benefit from the general downsizing trend in the market. As far as their residual values are concerned, a defection of new car buyers to used cars should offset the rising popularity of B-SUV offerings instead of traditional B-segment hatchbacks. This is essentially replicating the switch that occurred a segment higher when consumers defected to C-MPVs and later C-SUVs from traditional D-segment body-styles.

The upshot is that used demand is broadly expected to soak up the additional supply in the UK market and residual values will be resilient as a result. A source from a leading OEM commented that ‘personal contract purchases were expected to have a destabilising effect on the used car market but this has not happened’ and despite the Brexit process and the VED hikes, it will take ‘something seismic’ for values to plummet during 2017-18. But with all the uncertainty on the political and economic horizon, any impact on consumer confidence will put pressure on values and ultimately deters used car buyers as well as new.

Diesel fuel carries a cost premium over petrol in the UK, largely due to taxation. Consequently, the market share of diesel cars is typically the second lowest in the Big 5, only ahead of Germany. This was the case again in 2016, when diesel captured 48% of the new car market. The higher cost for diesel at the pump also translates into weaker demand among budget-conscious used car buyers and in turn, impacts residual values. In the other Big 5 markets, diesels retain a notably higher percentage of their new price than their petrol siblings after 36 months and 90,000km. But in the UK, the unweighted average value retention for diesels is only marginally higher. Diesels resale at an average ranging from just over 35% for the A-segment to less than 40% for the E-segment. Petrol values come in at 33% for A-segment models, reaching 38% for E-segment offerings. Diesel is under increasing pressure in the UK, as in other European markets, but the impact remains limited. An industry source said that average selling days for diesel may have crept up to 47 compared to an average of 40 but the change is certainly not monumental.