Back in August 2017, Autovista reported in the Daily Brief that Volkswagen (VW) hoped the residual values of its used diesel cars would stabilise with the introduction of trade-in bonuses for owners of older diesel cars which only comply with emissions standards Euro-1 to Euro-4.

The average unweighted residual values for petrol cars of the VW brand continue to mirror the used value development of petrol cars overall in Germany. However, the trade values of VW diesels as a percentage of their list price after 36 months and 90,000km have deteriorated at an even quicker rate than the average value retained by diesels in Germany and even fell below this level from May to September 2017. The latest data from Schwacke, Autovista Group’s German arm, reveals that VW diesel values have since recovered and are now tracking the overall residual value movements of diesels in Germany. 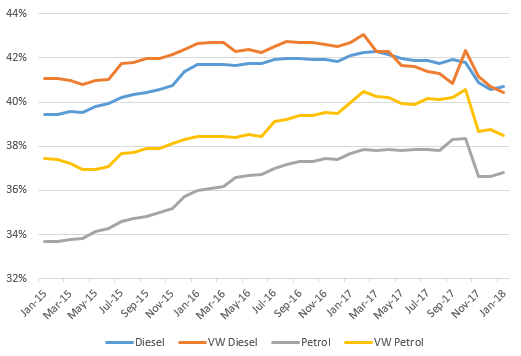 This suggests that the residual values of VW diesels may have benefitted from improved confidence as a result of the trade-in bonuses and the software updates for newer used diesels. Germany sales and marketing manager Thomas Zahn said back in August that increasing residual values was one of the objectives of the incentive scheme and this appears to have been achieved to a certain extent. Nevertheless, the fact remains that the residual value advantage that VW diesel cars commanded in Germany compared to their peers has essentially evaporated.

Drilling down to model-specific residual value data confirms that the value retention of the Golf 2.0TDI Blue Motion (in Comfortline trim) has been consistently falling at a faster rate than its key competitors in Germany. A deterioration of residual value is naturally to be expected over a vehicle’s lifecycle, but over the course of the twelve months from September 2016 to 2017, the Golf lost close to four percentage points of its value retention after 36 months and 90,000km, falling from 46% to 42%. In fact, over the same twelve month period, four of the five other models in the Golf’s core competitive set (C-segment diesels offered by volume brands) actually gained in their residual value as a percentage of original list price. The exception is the Nissan Pulsar, but this has only been available as three-year-old proposition since the first quarter of 2017. Admittedly, the Renault Mégane and Ford Focus both benefitted from the arrival of facelifted versions filtering through to the used car market as three-year-old models in 2016 and 2017 respectively. Nevertheless, this divergent performance does suggest that the residual values of the Golf diesel’s key competitors may have even held firmer as buyers defected from the erstwhile residual value leader. 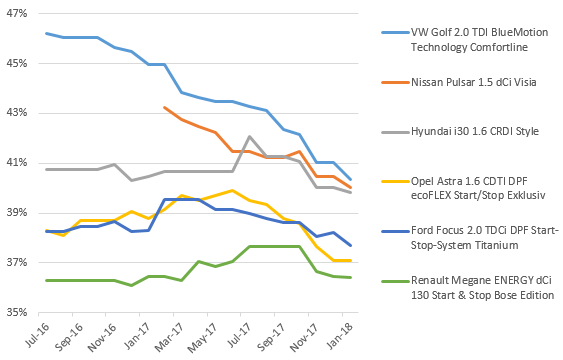 As Automobilwoche has previously reported, ‘the development of residual values ​​is important not only for diesel drivers but also for the balance sheets of carmakers. Because of the number of leasing contracts, companies are at risk if the cars are declining in value because they are de facto the owners of the leased cars.’

Aside from the reduced profitability as a result of poorer residual value performance, another side effect of higher depreciation of VW diesel models is their reduced competitiveness as far as total cost of ownership (TCO) is concerned. This, in turn, threatens to further reduce demand for VW diesels in an environment where diesels are already rapidly losing market share, not just in Germany but across Western Europe.

This decline in demand for diesels and the loss of its advantageous residual value position has undoubtedly contributed to VW’s decision to embark on an accelerated electrification strategy. The manufacturer has announced it is to invest up to €70 billion in the design and production of new electric vehicles (EVs) by 2025 as it aims to position itself as a leader in the technology.

Despite depending on diesel vehicle sales over a number of years, the repercussions of the emissions scandal have seen the company shift its position as it looks to rebuild its reputation. In an interview with the Handelsblatt newspaper in December, CEO Matthias Müller even commented that the German subsidy for diesel fuel would be better spent on directing people to electric vehicles. ‘If the transition to environmentally friendly electric cars is to succeed, the diesel internal combustion engine cannot be subsidised like before,’ he said - referring to the lower taxes drivers pay for diesel fuel compared with petrol. ‘The money could be more meaningfully invested in the promotion of environmentally friendly drive technologies.’

These comments could simply be interpreted as a reflection of the position the automotive market finds itself in. However, Müller’s suggestion could also be seen as a way of boosting sales of the manufacturer’s upcoming EV line, by getting the German Government to switch the subsidy at a time when VW is investing heavily in the technology. Since the comments were made, the German government has rejected the idea. Speaking to Reuters, spokesman Steffen Seibert said: ‘The federal government currently has no plans to change the diesel taxation.’

Germany is dependent on diesel, as a leader in the technology, with the country’s automotive industry one of its biggest employers. With EV technology still at an early stage, the Government is keen to keep a status quo for the time being. Senior VW officials have suggested Müller’s comments support a phased transition, and that the company is not suggesting the end of the diesel market is nigh.