According to the brochure, the 3008 SUV was over 200 years in the making, a reference back to the origins of Peugeot as a steel foundry producing coffee grinders and saws. I mention this because there is still an element of coffee grinder in the sound the diesel engine makes when cold, loud and clattery. Fortunately it quietens down when warmed up, and at cruising speeds is decently refined. The test car was the top of the range model, featuring a 2.0 litre 177bhp engine coupled with a new 8 speed automatic gearbox and offering 0-62mph in 8.9 seconds, which is about what I would expect for a car weighing just under 1,500 kg, just not from a real GT. The CO2 reading is 129 g/km.  The model costs £36,379 on the road and at this premium level is loaded with equipment and features, including a tailgate which opens and closes when you swing your foot under the central rear of the car. This gives you plenty of time to admire the “claw effect” LED rear lights which are a design feature of the latest Peugeot models, not to mention the “chrome effect exhaust trim”. No design subtlety here.

The Nappa Mistral leather trim with diamond switching is a very attractive feature and creates an impression of luxury, whilst the cockpit is attractively laid out with a double row of switches to select between functions on the touchscreen above. The touchscreen works well and quickly becomes intuitive to use. With the elevated driving position this SUV is a comfortable and smooth performer and a relaxed cruiser with relatively little wind, road or engine noise. 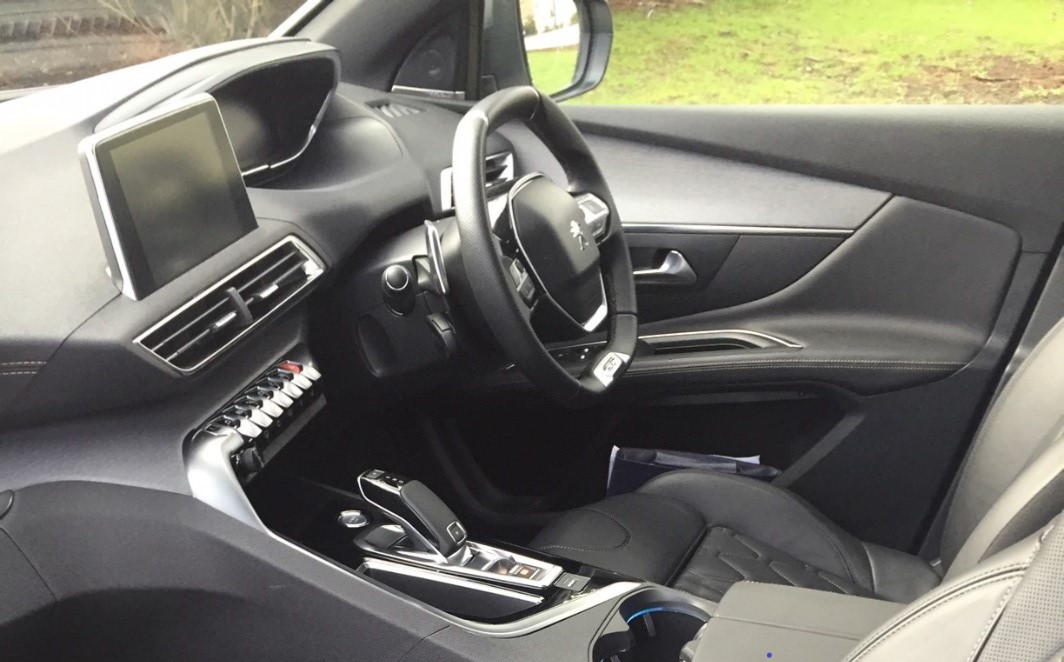 We took the car on a family weekend trip to Devon and this is where it was genuinely impressive. In heavy rain conditions it was stable and relaxing, and on the country lanes it was poised and grippy, defying its bulk and weight. It had enough performance not to be frustrating – a benefit of the 295 lb/ft of torque – and the ride was smooth and sophisticated. By the nature of SUVs the driver is not encouraged to throw them around corners, and in this respect the Peugeot is true to form, but the steering is sharp and well weighted and grip levels are high for the class.

Being a traditionalist, I did struggle with the steering wheel, which is a bizarre shape reminiscent of the justifiably unlamented Austin Allegro. The gear selector was also rather odd, in that it was never obvious whether a press on the button on the side of the lever was necessary or not to move between forwards and reverse. Maybe more practice is needed. The sport function worked well though, giving the car some enthusiastic urge. 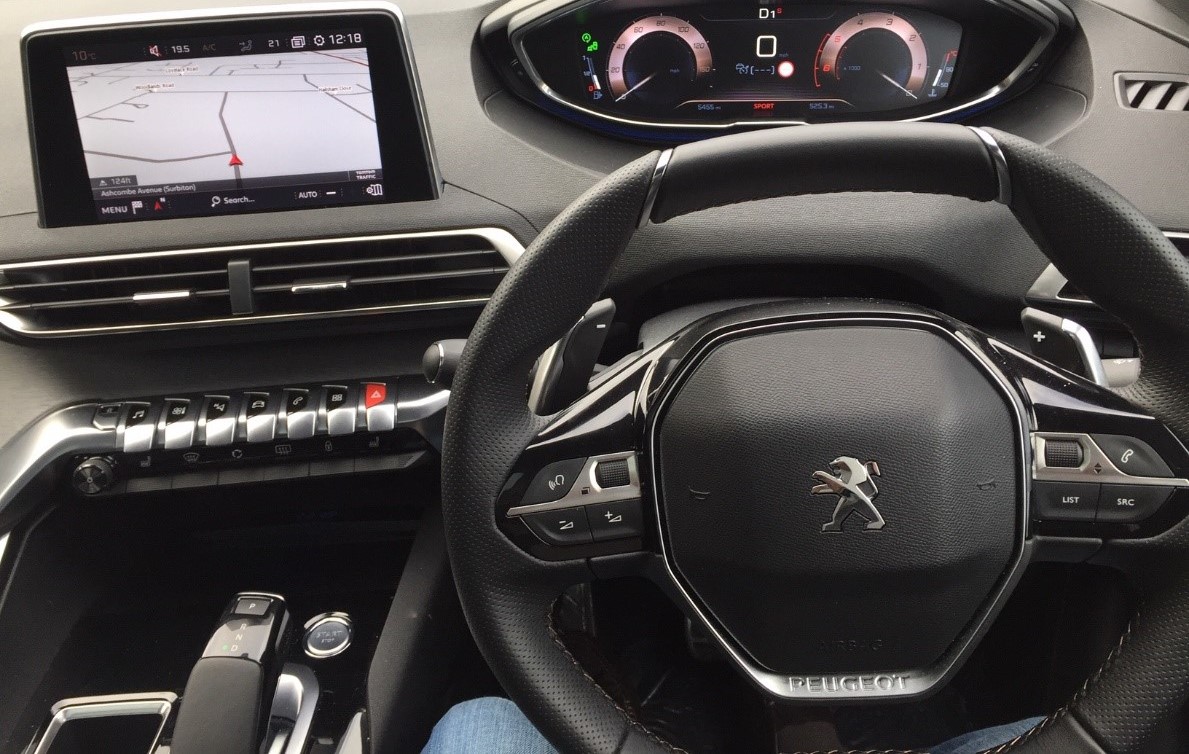 A more serious gripe was with the cruise control. It kept showing a message that implementation was refused – conditions unsuitable. I was also unable to experience the “Smartbeam Assistance”, which is supposed to switch the headlamps onto main beam automatically when conditions allow.

My wife was also disappointed about another gimmick with a propensity to distract the driver from the road ahead, the massage function, as it was only on the driver’s seat. There are eight pneumatic pockets in the seat backrest, which move in and out in five different modes. All they did for me was make me wriggle and squirm in the seat.

Although its footprint is not particularly large, the 3008 feels like a large car. It is not that easy to manoeuvre as visibility to the sides and rear does not inspire confidence. On the other hand, it has plenty of space for the family, well-thought out storage and loads of features, some of which are even useful. It was not as economical on test as the official figures suggest, and I managed around 38mpg, which is ok for the size and weight of car but perhaps a little disappointing for what is billed as the latest and best diesel technology. So overall, maybe not a Gran Turismo, rather a Good Traveller. 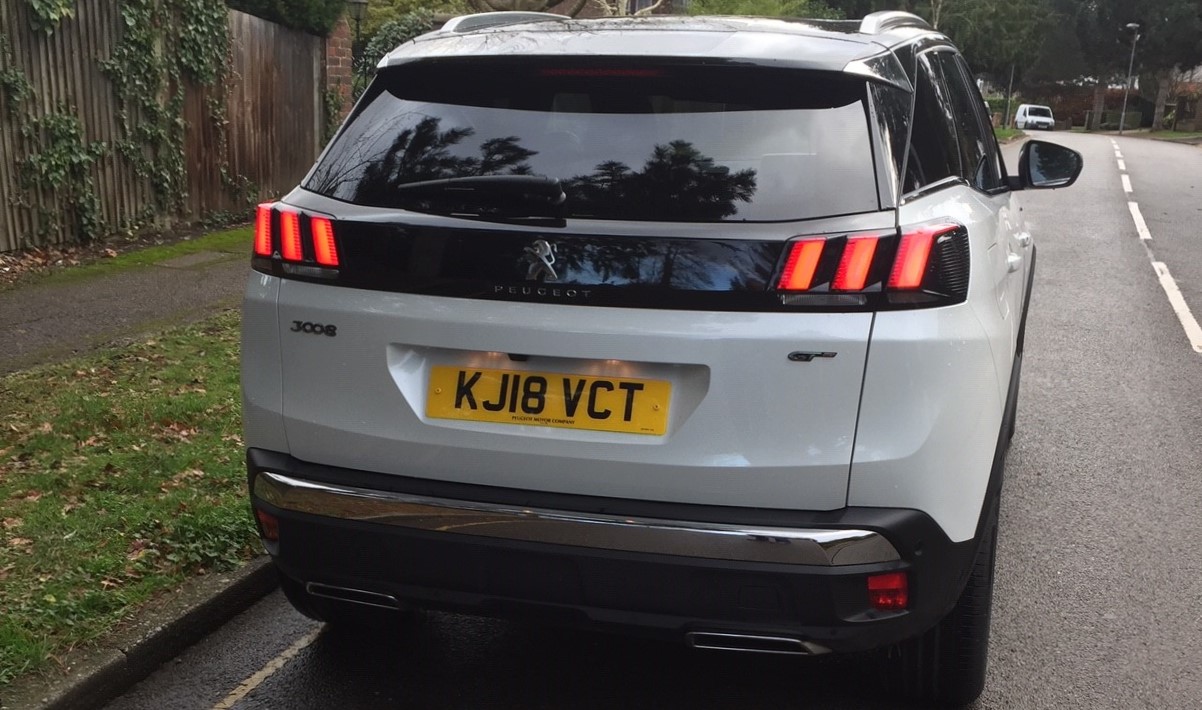