The market for light commercial vehicles (LCVs) is often somewhat neglected in the automotive industry. Volumes are smaller, it is price-driven, has fewer distinguishable model ranges and is not as glamorous as the more disparate passenger-car market, writes Andreas Geilenbrügge, head of valuations and insights at Schwacke.

It is therefore worthwhile measuring its pulse separately. On the one hand, this market functions according to its own rules while on the other hand, used vans are almost exclusively for commercial use but have also suffered from the ongoing coronavirus (COVID-19) crisis.

Looking at the German registration figures for new LCVs, the picture appears comparable to that of passenger cars at first glance. LCV registrations were 22% lower year-on-year in the year-to-August 2020 and passenger cars were down 29%, so not that far apart. However, looking in more detail, it is noticeable that passenger cars were still successful at the beginning of the year, whereas LCVs were already lower in January and February 2020 compared to the previous year's figures. And then the COVID-19 effect from March to May came on top with full force.

Even the immense new-car success in Germany due to extended incentives is scarce in the vans segment. Without the Ford Transit and Transit Custom hybrids, the overall balance of (partly) electric vehicles would even be slightly negative. In addition, although the surplus of tactical registrations in Q3 2019 put a heavy burden on the new-car trade during the shutdown, it is now helping to satisfy unmet demand for new cars, due to production downtime and supply shortages, with young used cars. There was not such a large surplus of young used vans, as there was no need to register produced vehicles quickly, which would have otherwise contributed to CO2 emissions penalties in 2020.

In terms of new registrations, LCVs have therefore been much less affected by the crisis than passenger cars.

The change-of-ownership data paint an even better picture, with year-to-August growth of almost 4% for LCVs up to six years old and 2.5% growth for all ages. This is even with the lack of supply from trade registrations due to the crisis pulling volumes down this year. Looking at the brands, most large-volume players are in the black (figure 1). The unusually positive outlier Mitsubishi is probably explained by a combination of portfolio peculiarity (almost exclusively pickups) and a shortage of new cars due to production interruptions in Thailand. 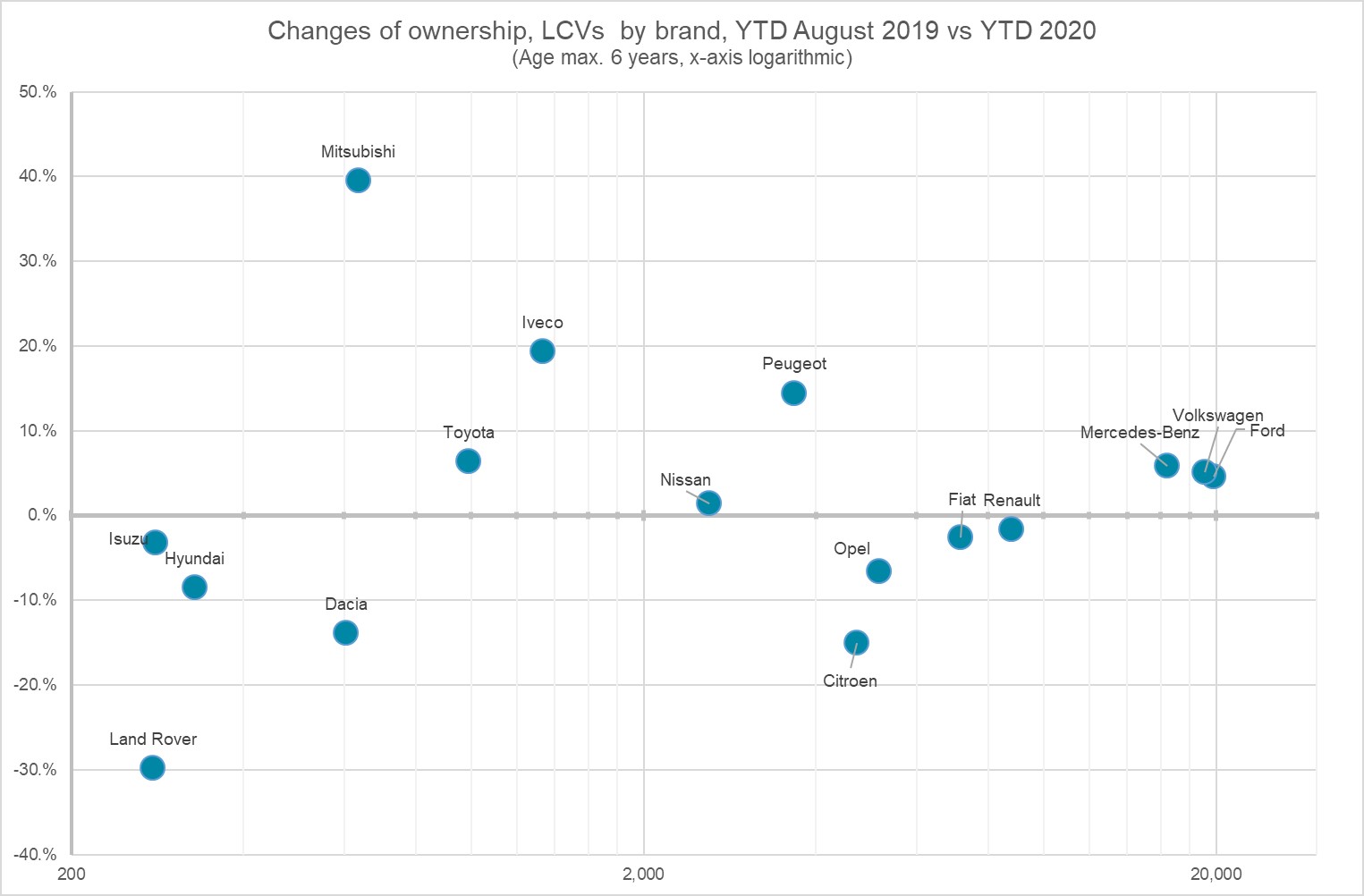 Stock management is the key

As can be seen from the development of stock levels on used-vehicle portals, there was an initial accumulation of LCVs during the shutdown, and then, as expected, a significant surge in the outflow of used vehicles (figure 2). In the meantime, stocks have returned to their pre-crisis level in terms of volume (figure 3). Still, the persistently high average level of stock days indicates that although ‘fresh goods’ are entering and exiting quickly, those that remain stay longer and longer.

Figure 2: Stock development of LCVs on portals, 2.5 to 4.5 years of age, volume and average stock days 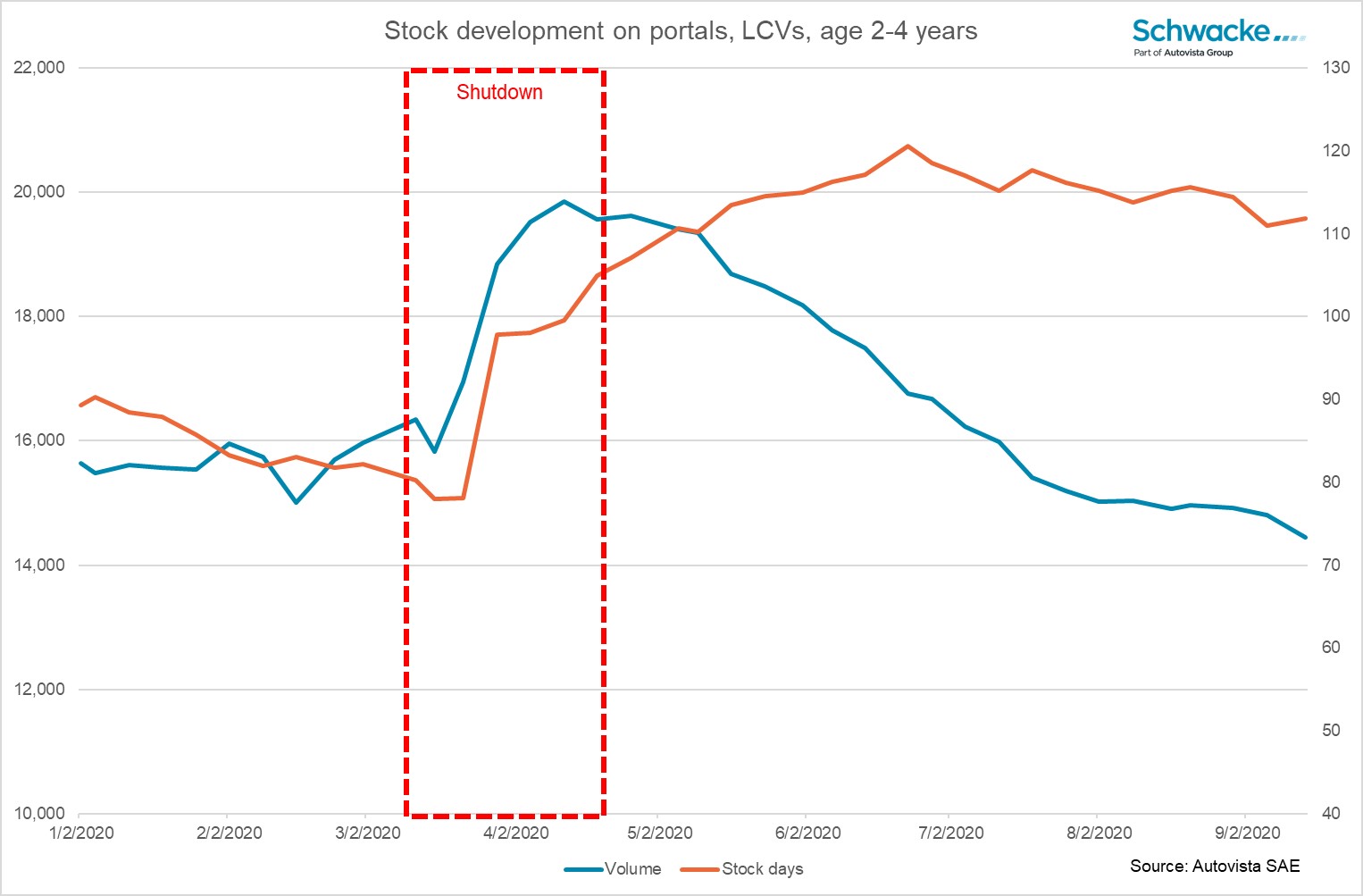 Figure 3: Stock development of LCVs on portals, less than and above 60 stock days

With a view to the approaching year-end business, the risk of a price war is building because of the long-standing vehicles. In addition, the approximately 25,000 fewer new sales to end customers in the year-to-date have torn a large sales hole in the books of commercial vehicle dealers, despite the 6,000 more sales of used vehicles. So, in December, every used van that is somehow paid for and rolls off the lot, will count even more than usual.