In the first of a two-part series in which Autovista Group assesses the impact of the coronavirus, chief economist Christof Engelskirchen analyses the pressure building on residual values around the Big 5 European markets as they grapple with the economic and social fallout of the pandemic.

Signs are emerging that the Chinese government may have contained the coronavirus (COVID-19). The country looks to be emerging on the other side of peak infections while the rest of the world stands at the beginning of a very dynamic development.

Severe measures implemented in Italy are now hinting at the beginning of a flattening of the curve of infections. In Germany, a bit over a week of strict measures implemented by the Government, have not yet resulted in a substantial slowdown of infection rates. The US has just surpassed China in the number of infections and the states of New York and Louisiana are particularly hard hit. In India, the biggest citizen lockdown has been implemented, affecting a population of 1.3 billion.

Elsewhere, countries appear ill-prepared to cope with the potential impact that the virus will have on their societies. For most, business activity has largely come to a stop. However, there is ample monetary and fiscal support, most notably the $2 trillion from the US Government, which has effectively doubled public debt. Stock markets have reacted positively over the past few days to monetary and fiscal stimuli. The Dow Jones Industrial Average index rose more in one day than ever in its history.

However, the situation remains far from being contained and the full extent of the implications that COVID-19 will have on economies and societies has yet to emerge. Significantly, on 27 March there was another substantial downward correction on stock markets. It would seem that China could be heading towards producing items that no one in the west will be in a position to buy under the strict regimes to combat infection. This would be a risk for the Chinese economy.

As forecast providers, we are challenged by these developments like anyone else. We have mapped out various scenarios, which we will update regularly as assumptions are adjusted and more robust data emerges. We will start with coverage of the Big 5 European markets France, Germany, Italy, Spain and the UK, with additional markets to follow.

Dealer activities at a halt

Markets are reporting a standstill, as dealers are closed and economic activity has largely come to a stop. These developments are also visible in our data. Activity on portals has halted and the number of used cars sold via them (Figure 1) has dropped by 65% between 16 and 23 March in Italy. In the UK, which was late in implementing severe measures to combat the virus, the number of cars sold experienced a 32% decline during the same period. In France, Germany and Spain the decline is between 45% and 69%, also correlating with the extent and timing of the lockdown. We expect these numbers to worsen substantially over the coming weeks as the short-term demand shock will become even more visible and dealers remain closed with too little activity on the e-commerce front.

Figure 1: Change in used-car sales by dealers via automotive portals, w/w in % since February 2020 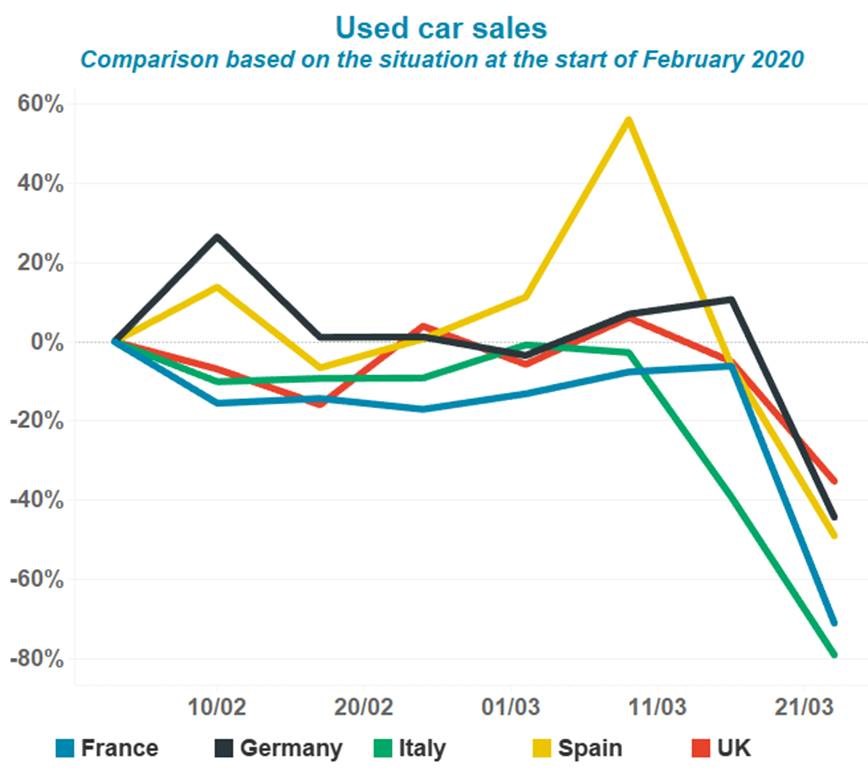 In our used-car pricing data, we see only the most gradual decline in RVs between the beginning of February 2020 and today (Fig. 2) but this is expected to change. 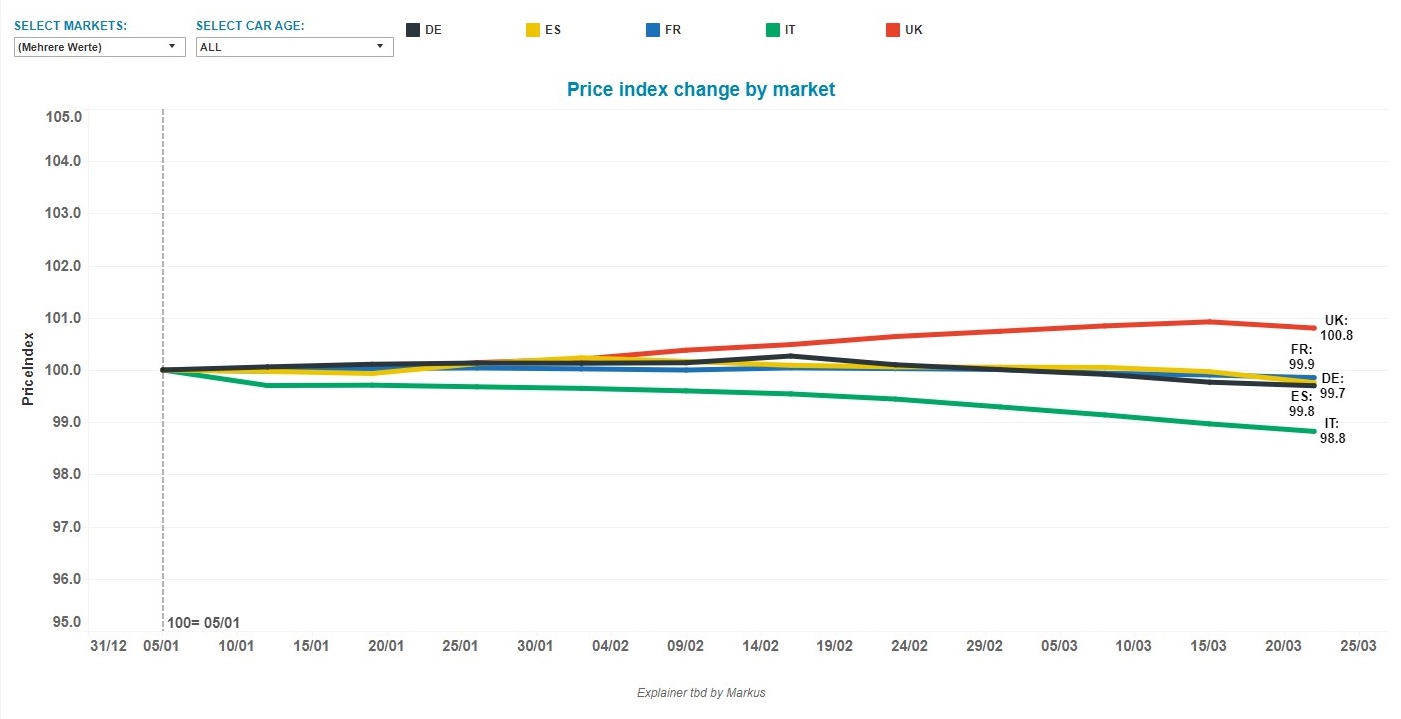 The reasons behind this gradual decline are two-fold:

Nevertheless, we see the beginning of a trend forming. Prices in Italy, where the lock-down has been in place for the longest period, are dropping slightly more than prices in other continental markets  from February until March. In the UK, prices are rising slightly, but this is due to reduced supply of traditional internal combustion engine vehicles and improved demand for alternatively fuelled vehicles. Furthermore, the UK only truly entered lockdown following Prime Minister Boris Johnson’s address to the nation on 23 March.

In Part 2 tomorrow, we explore five scenarios we have developed, hypothesising the impact of the coronavirus pandemic on used-car values in the key European markets.