Formula 1 is the best testbed for automotive technology

Formula 1 is the best testbed for automotive technology

Motorsport can be a great testing ground for new automotive technologies. As it strives to be more relevant, the many different forms of racing attract manufacturers, suppliers and independent companies alike, in an arena where one mistake can cost time, points and ultimately, money.

The pinnacle of the motorsport world is Formula 1. The leading motorsport underwent a revolution five years ago, ditching the normally aspirated 2.4-litre V8, which themselves had decreased in size from 3.5-litre V12 units over the years, in favour of a 1.6-litre V6 hybrid. These new engines utilise a turbocharger and two energy-recovery systems; the MGU-K, which stores energy created under braking, and the MGU-H, which recovers energy from the heat produced by the turbocharger.

With the automotive industry pursuing a greener image and hybrid already being a defined and ready technology, Formula 1 offers an opportunity for the four manufacturers involved – Daimler (Mercedes-Benz), Fiat Chrysler Automobiles (Ferrari), Renault and Honda - to evaluate recovery technologies, the relevance of turbochargers on smaller engines, and the efficiency required for a full race. It is perhaps for these reasons that in the latest Autovista Group survey, asking which form of motorsport is best for testing new technologies, the series came out top with a 46% share. 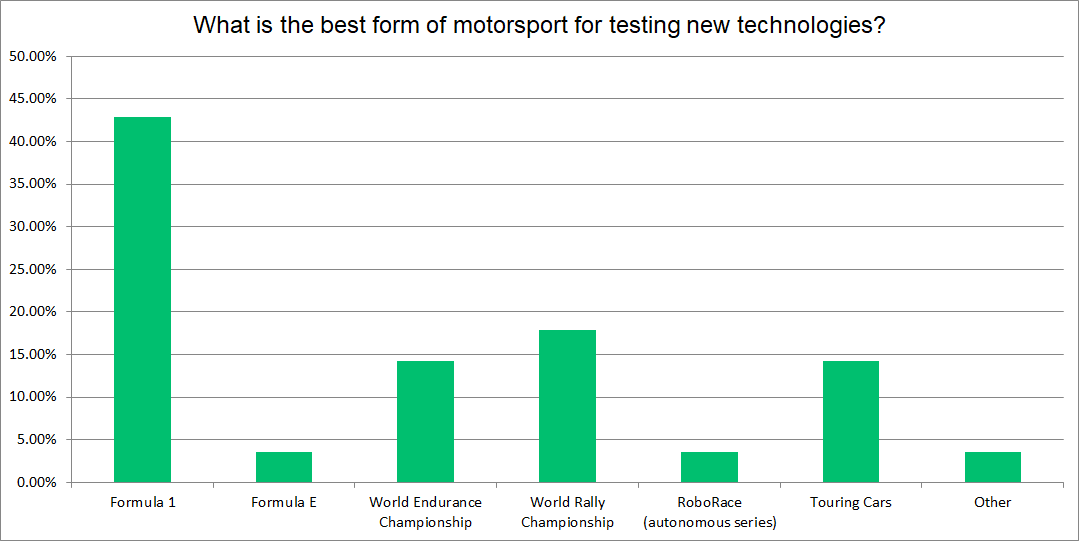 The World Rally Championship (WRC) is struggling as a series today, following its heyday in the late 1990s. Throughout the decades, it has been seen as a series based on toughness and performance, with carmakers developing models based around their rally cars (sometimes as a necessity depending on the rules). The WRC has produced memorable cars including the Subaru Impreza WRX, Mitsubishi Evo, the Escort Cosworth and, during the Group B days, the Ford RS200. Audi’s Quattro system was honed in the rally championship - perhaps a reason why it ranked second in the poll, gaining 18% of the votes. Today, the Group R cars that compete in the WRC are 1.6-litre turbocharged petrol vehicles fitted with four-wheel drive.

In a close third in the survey was the World Endurance Championship (WEC), with 14% of the votes. This series is all about longevity in races and incorporates the world-famous Le Mans 24-hour race. Cars need to be efficient, powerful and robust to last, while the components involved also need the same qualities.

Audi introduced a diesel engine to the series in 2006 and the rules were changed in 2009 to allow hybrid vehicles - a regulation Toyota took advantage of, although the manufacturer had to wait until 2018 to win its first Le Mans. The sport’s governing body, the FIA, is looking to encourage non-hybrid engines to increase future entries, following the withdrawal of Porsche and Audi, leaving the Japanese carmaker as the only major manufacturer in the leading LMP1 class.

Touring cars came next in the survey, with 8% of the votes, followed by the upcoming RoboRace autonomous series with 6%. Perhaps surprisingly, Formula E, the pure electric racing series, gained just 5% of the votes cast. The series, about to enter its sixth season, saw a raft of technology upgrades last season, with cars able to complete a full race on one charge. Previously, drivers needed to swap cars halfway through the race. However, many cars had to save power, as going flat-out for 45 minutes proved too much on some circuits. Some believe these range issues could prove more detrimental to the future of electric vehicles.

Finally, 2% of respondents selected the ‘other’ option. Comments included Formula 2, Moto GP, and one respondent even thought illegal street racing would be the best form of motorsport for testing. This is, however, unlikely to attract many – if any - mainstream manufacturers.