In the third quarter of 2020, almost one in 10 passenger cars sold in the EU was electrically-chargeable (9.9%), compared with 3% in the same period last year, according to the latest data from the European Automobile Manufacturers Association (ACEA). Cars driven by internal combustion engines (ICE), accounted for more than 75% of the market from July to September. However, this is down from the 88.6% share diesel and petrol commanded in the same period in 2019. 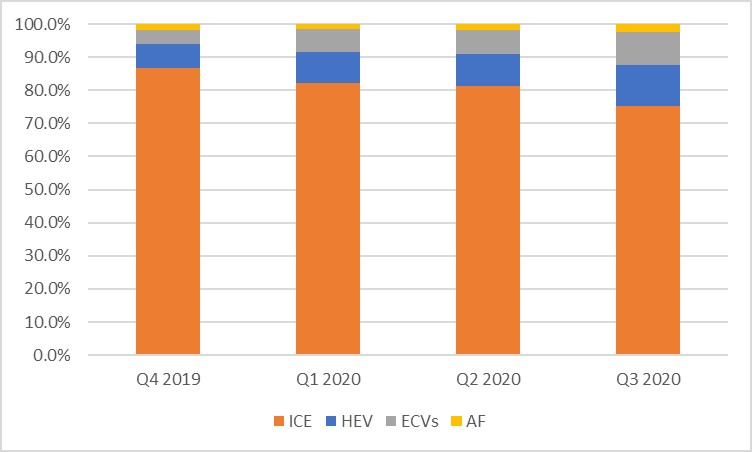 From July to September 2020, registrations of electrically-chargeable vehicles (ECV) more than tripled to reach 273,809 units and a market share of 9.9% (up 211.6%). According to ACEA, this strong growth is chiefly attributable to COVID-19 recovery incentives introduced by governments. The association states this has ‘been largely to the benefit of buyers of battery and plug-in electric cars.’

Hybrid-electric vehicles (HEVs) remained the bestselling alternatively-powered vehicle type in the EU, posting an increase of 88.8% in Q3 2020. In total, 341,092 hybrid-electric cars were sold from July to September 2020, representing 12.4% of the EU car market.

Demand for cars running on alternative fuels – ethanol (E85), liquid petroleum gas (LPG) and natural gas (NGV) – slowed down in the third quarter of 2020 (down 6.8%). However, this was at a more moderate pace compared to the previous quarter. This was mainly the result of declining sales of natural gas-fuelled cars (down 13.2%), while registrations of LPG vehicles remained almost unchanged (up just 0.8%).