EV push is the cause of poor financial results

EV push is the cause of poor financial results

Electric vehicle development is the key reason why some carmakers are posting problematic financial results, as the industry adapts to meet strict CO2 targets and a changing automotive climate.

The results of the latest Autovista Group survey show that nearly a third (32%) of people believe that new technology is causing a detrimental effect on company figures. With the collapse of the diesel market, and looming emissions targets set by the European Union, together with stricter figures for 2025 and 2030, electric vehicle technology, which was a niche sector before, has become a must-have for all vehicle manufacturers. 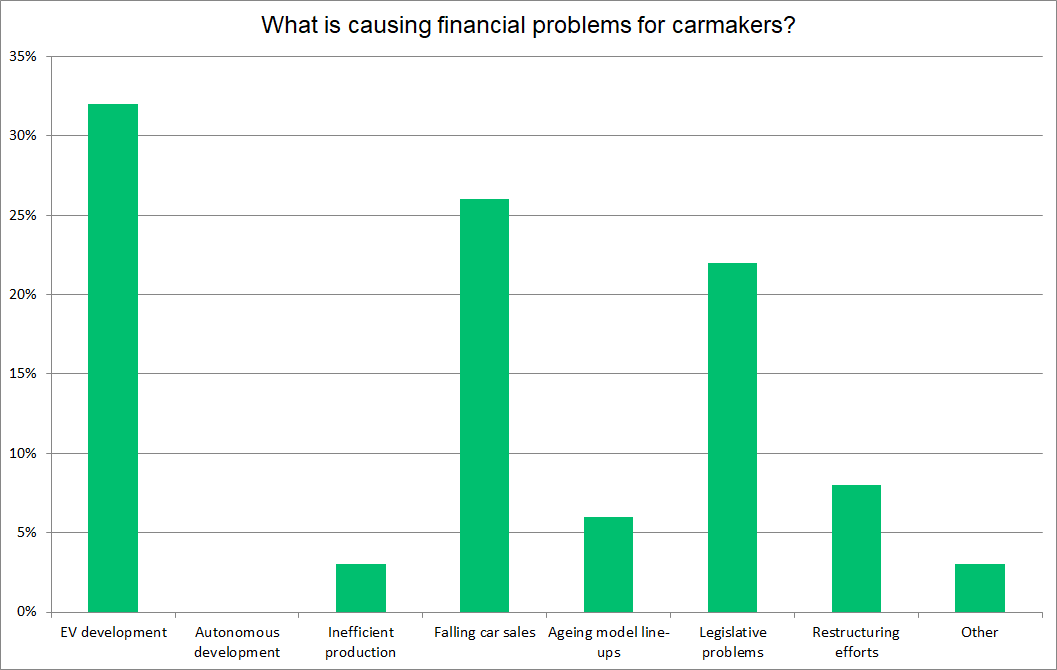 However, the development of such systems is not cheap, nor is the sourcing of components. This means carmakers are having to invest heavily in technology, and the production of future vehicles, which is cutting into profits as a result. To offset this, some are looking to collaborations with other companies in a bid to share the development budget and reap the rewards of a quicker route-to-market.

To highlight the issue, BMW pointed to the workaround electric and hybrid vehicles as a factor in its recent Q2 results. ‘We are consistently expanding e-mobility with all-electric vehicles and plug-in hybrids and continuing to optimise our already economical combustion engines. Moreover, we are also investing in new technologies such as the [hydrogen] fuel cell,’ commented outgoing CEO Harald Krüger.

Just over a quarter (26%) of respondents felt that falling car sales were to blame for poor financial results. Some carmakers are reporting that sales were up over the same periods last year, but many of the bigger firms are struggling, as customers hang on to their vehicles for longer. In June, sales dropped by 7.8% in Europe, although there were fewer working days compared to June 2018. Nevertheless, most carmakers are struggling, with leading firms such as Volkswagen and Renault posting lower sales. For the first half of the year, across the European market, sales were down 3.1%. This ultimately means less income and therefore fewer profits, affecting financial results.

Following this, legislative problems (fines, etc.) garnered 22% of votes. Again, it is BMW that has highlighted this, with a €1 billion amount set aside as it expects a heavy fine in relation to its involvement in a cartel surrounding emissions components. However, many others are looking to the future - in particular, to the aforementioned 2021 CO2 targets. With a fine for every gramme over their individual targets, multiplied by the number of cars sold in 2020 and 2021, some manufacturers are facing penalties that amount to billions of euros and are therefore putting aside some profits to counter this.

Following these three big results, the next option, restructuring efforts, only gathered 8% of responses. This was a point made by Ford, whose net income plummeted 86% to $148 million (€133 million) once special charges of its European restructuring programme were taken into account. Other carmakers too are amending their business plans in Europe, with JLR and Nissan looking to cut jobs, while Honda is closing factories in the UK and Turkey. Such cuts will lead to large pay-outs in redundancy fees and the cost of moving production and developing plants to take up any losses elsewhere, while model reduction will lead to an initial decrease in sales.

Next, with 6%, came the issue of ageing model line-ups, which are putting buyers off investing in new vehicles. Inefficient production, which would see plants wasting time, effort and therefore money, received a 3% share of the poll.

The ‘other’ category gained 4%, with many saying that Brexit was a big cause of financial problems, while others pointed to the increased development of the mobility sector, to counter falling car sales and changing perceptions of vehicle ownership, as the main issue.