Scrappage schemes are the answer to the current situation surrounding diesel air pollution, according to the results of the latest Autovista Group survey.

In Germany, a recent court ruling has forced the cities of Stuttgart and Dusseldorf to implement driving bans for diesel vehicles within their boundaries. This move is to reduce the rising air pollution levels in the areas and could be expanded to other cities and towns throughout Europe.

This has also forced vehicle manufacturers to consider expensive hardware retrofitting of older diesel vehicles, which would be expensive. These would be in addition to software retrofitting which is already taking place in Germany, following a summit in August last year.

At the same time, it was announced that German manufacturers would look to introduce scrappage schemes, removing older diesel vehicles from roads altogether and replacing them with cleaner alternatives. These four answers to air pollution all state they will offer results, but Autovista Group decided to ask readers of the Daily News Brief for their thoughts.

In total, 63% of respondents said they felt the most effective solution to reducing air pollution is a scrappage scheme. By removing older diesel vehicles and replacing them with cleaner models, including modern diesel vehicles which comply with strict emission standards, levels of pollutants including nitrogen oxides (NOx) would inevitably drop.

City bans were the second most popular choice; although there was quite a gap with just 19%, while these will offer a drop in air pollution, these will also be the most disruptive solutions. Drivers who own vehicles that would be subject to the ban would need trade their cars in for petrol or alternatively-fuelled vehicles if they wish to continue living and travelling within the affected zones.

Meanwhile, retrofitting solutions were the least popular solutions. While 13% of respondents felt that hardware recalls would have an effect on air pollution, the current solution offered by manufacturers, software retrofitting, only garnered 4% of the results. Altering of emission profiles is currently ongoing in Germany, although it remains to be seen how this solution will improve pollution levels. This is the favoured option by manufacturers as it means fewer cost implications.

Therefore, the scrappage scheme incentives should continue in the long term to aid drivers in moving from dirtier and polluting vehicles to cleaner, modern alternatives. 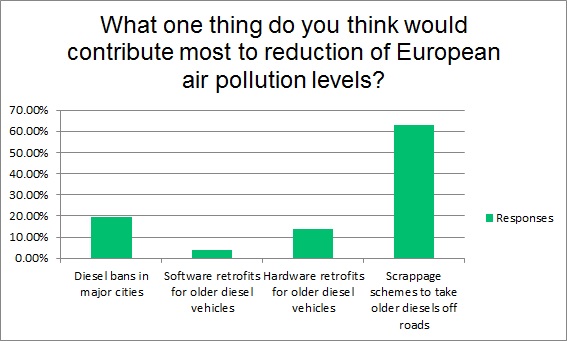 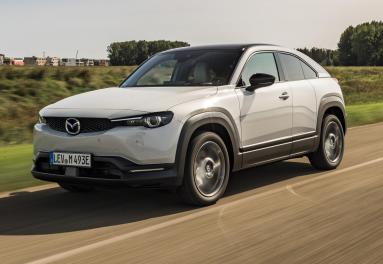