Insight: The Top 5 residual value performers and the fastest-selling used cars in the UK are mutually exclusive

Insight: The Top 5 residual value performers and the fastest-selling used cars in the UK are mutually exclusive

Although residual values are under pressure in the UK, the used car market is proving resilient compared to new car demand. Disregarding exotic cars, premium SUVs are retaining the most of their original price in the UK. However, these are not the quickest used cars to fly off forecourts.

Analysis of Glass’s (the UK arm of Autovista Group) residual values reveals that the Lexus NX is the residual value champion in March 2018, retaining 64% of its value after 36 months and 60,000 miles. Although the NX only became available as a three-year-old used car at the start of 2017, it did not rank in the Top 5 residual value performers a year ago. However, as a diesel variant of the NX is not offered, the average residual value for the model has not been adversely affected by the poorer performance of diesel residual values in the UK compared to petrol and hybrid derivatives.

Among the Top 5 residual value champions in March 2018, the Volvo XC90 is the only other model which has enjoyed residual value growth over the last year. With the second generation of the Volvo XC90 now filtering through as a three year-old proposition, it has overtaken the Land Rover Discovery Sport to move into 4th place. Despite losing six percentage points of value retention since March 2017, the Mercedes G-Class remains in second place and is the only German representative in the Top 5 residual value champions. The seemingly evergreen G-Class remains ahead of the Range Rover Sport, albeit by less than one percentage point.

The SUV sector continues to be the fastest growing part of the new car market, but values for younger SUVs will underperform as increased supply better satisfies demand and diesel variants wane in popularity. We believe the segment is reaching saturation point with large volumes expected back into the market over the next 18 months, which will erode values. 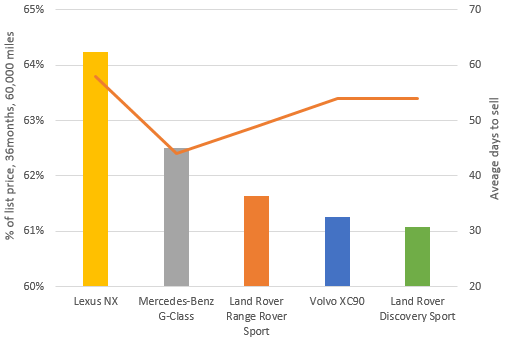 Although these premium SUV models are the current residual value champions, analysis of Glass’s live retail data reveals that they are not the fastest-selling used cars. The Lexus NX actually takes the longest to sell in this peer group, at 58 days on average. The quickest seller in this group is the Mercedes G-Class, at 44 days. However, even the G-Class takes several days longer to sell than the UK’s fastest selling used cars and that ranking of models not be more different.

The data is based on over 8.4 million annual real trade car adverts on the UK’s leading advertising portals, with a minimum of 50 observations. The list of the quickest used sellers in February 2018 reveals that an attractive price and value for money are paramount when it comes to moving used stock on quickly. 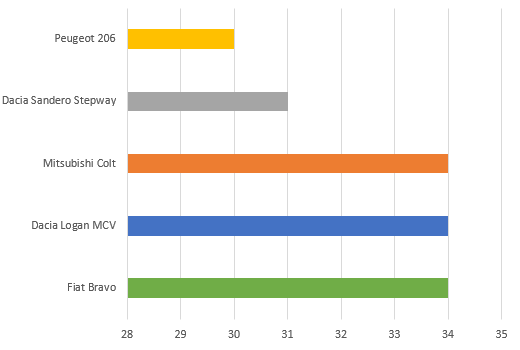 The Fiat Bravo is an especially notable entry in the ranking of the fastest-selling used cars as aside from electric vehicles (EV) such as the Renault Zoe, Peugeot ion and Citroen C-Zero, it suffers the highest depreciation of all used cars in the UK. Retaining just 24% of its value after 36 months and 60,000 miles does make this an exceptionally attractive used family car.

Although the Nissan Leaf now retains more of its value than a Fiat Bravo, four of the five highest depreciating models in the UK are electric. However, it must be noted that the value retention of EVs is calculated based on list price and not the purchase price after incentives are applied. Even so, this does highlight the plight of remarketing electric cars. 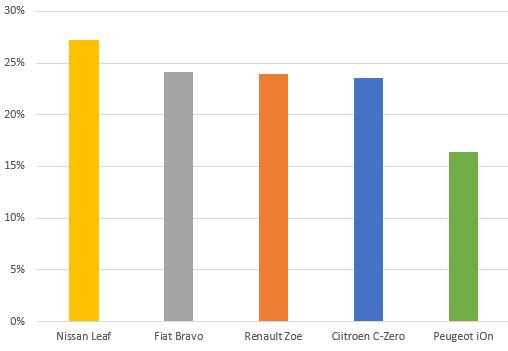 Glass’s live retail data is based on over 8.4 million annual real trade car adverts on the UK’s leading advertising portals, with a minimum of 50 observations. The list of the quickest used sellers in February 2018 reveals that price and value for money are paramount when it comes to moving used stock on quickly.