New-car registrations in the EU declined 7.8% year-on-year in October.  Volumes fell from 1,034,669 units to 953,615. This marks a return to the market contractions suffered every month in 2020, except for the modest growth in September. The decline is an improvement on the dramatic double-digit declines suffered in March to June, and again in August, but does not bode well as the region contends with a second wave of coronavirus (COVID-19) cases and lockdowns. 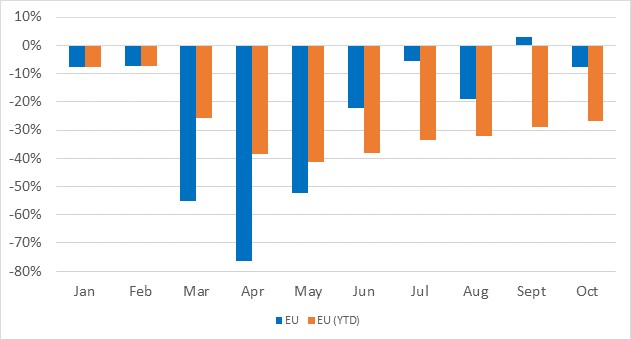 All EU new-car markets contracted last month - apart from Ireland and Romania, which enjoyed year-on-year growth of 5.4% and 17.6% respectively. This renewed EU-wide downturn was to be expected given the year-on-year declines already reported in France, Italy, Spain, and even Germany in October.

Single-digit declines were reported in France, Germany and Italy, although the decline in Italy was just 0.2% and the result would have been positive (up by about 4%) had there not been one less working day. This follows the 9.5% growth in new-car registrations in September, due to the new government incentives that came into effect at the beginning of August as part of the Decreto Rilancio (Relaunch Decree). While the market still contracted in that month, demand improved but delivery times delayed many registrations until September and October.

On a less positive note, there was a double-digit decline of new-car registrations in Spain in October. The MOVES II and RENOVE schemes were introduced in July, and the new-car market saw a 1.1% increase in the month. Since then, however, there have been respective monthly declines of 10.1% and 13.5% in August and September, and now 21.0% in October. It is therefore clear that weak underlying consumer demand is the problem in the country. Measures to deal with the second wave of COVID-19 infections, and the calculation of the registration tax based on WLTP emissions figures from January 2021, are further complicating the recovery. 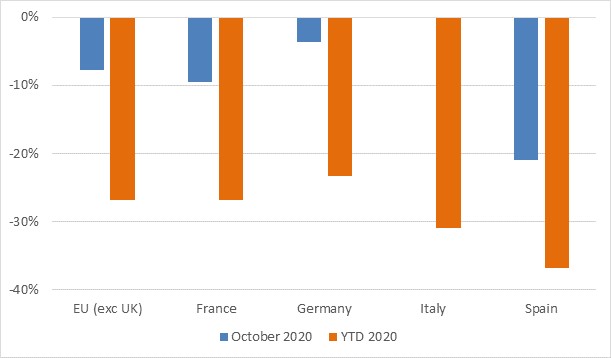 In the smaller EU member states, year-on-year contractions of more than 20% were reported in seven markets, including Finland, Slovakia and Slovenia. However, some markets were far more resilient, with downturns of less than 5% reported in Austria and Hungary.

In the first 10 months of 2020, registrations of new cars in the EU fell by 26.8%. Even the market downturn in October continued the improvement in the year-to-date contractions, which bottomed out at 41.5% in the first five months of the year. The greatest loss among the major EU markets was in Spain, which has contracted by 36.8% in the year-to-date, ahead of only Croatia (down 43.5%) and Portugal (down 37.1%).

As the positive contribution of pent-up demand is ultimately exhausted, the second wave of COVID-19 infections, the severity, duration and geographic spread of lockdowns, and the economic fallout of COVID-19, will define how new-car markets perform in the remainder of 2020 and beyond. The key to recovery revolves around countries agreeing budgets for 2021, and improving economic certainty and consumer confidence to boost spending. The allocation of aid resources provided by the European Recovery Fund, agreed on 21 July, will also play a pivotal role in shaping the forward outlook for Europe’s new-car markets.

Among the leading European carmakers, the BWW Group, Ford, Mazda, Mitsubishi and Nissan all registered more than 10% fewer new cars in the EU in October 2020 than in October 2019. Mazda suffered the greatest loss, with EU registrations down 38.0% year-on-year.

Fiat Chrysler Automobiles (FCA) and the Renault Group, however, managed to register 3.9% and 0.2% more cars respectively in the EU than in October 2019. All other major manufacturers suffered single-digit declines of between 6.2% (Honda) and 9.7% (Jaguar Land Rover) in the month.

Across Europe, manufacturers with a strong electric-vehicle portfolio are expected to perform better than those without as electrically-chargeable vehicle (EV) consumers are less likely to be tempted by used cars instead of new. This is because they tend to be less price-sensitive buyers, but there is also limited availability of the latest electric models on the used-car market. In the year-to-date, Toyota is the best-performing manufacturer in the EU, albeit with registrations down 16.9%, supporting this hypothesis.

In a new video, Autovista Group Daily Brief editor Phil Curry talks through the latest registration figures in the big four EU markets and the UK.