As European markets start to consider their emergence from coronavirus (COVID-19) lockdowns, Roland Strilka, Autovista Group’s director of valuations, looks at three markets that are taking different approaches to the crisis, and finds some positive signs for the future.

Most European countries are in a state of lockdown, meaning those who want to buy a new car will face challenges. Closed showrooms, no test drives, limited availability of sales agents are all obstacles to those who are even considering a purchase during this time. If a potential buyer can master these pitfalls, it might still be the case that a newly bought car cannot be registered and used accordingly. This situation differs from country to country depending on the lockdown measures that have been put in place by respective governments.

Three countries that are worth comparing are Spain, as one of the countries hit the hardest and with a complete lockdown; Sweden, not taking any lockdown actions to flatten the infection curve; and China, as a country emerging from the effects of COVID-19. 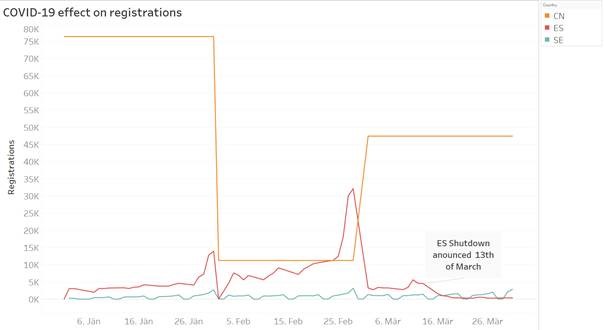 Of the three, Spain has been hit the hardest. The country’s lockdown began on 13 March and nearly brought the market to a standstill. While the busiest day this year had over 32,000 registrations (end of February), this has dropped to a level of about 140 a day. The lockdown forced schools, universities and shops (apart from grocery stores) to close. All those who were able to work from home were instructed to do so, and leaving the house was only permitted for food shopping and exercise – unless travel for work was unavoidable.

This, of course, also forced car dealers to stop sales in their facilities. Activities instead moved online, but quite a substantial number of adverts were removed from the market at the beginning of April.

According to information from used-car portals, monthly subscriptions have not been renewed. This most likely happened because there was no staff available at the dealerships to renew these contracts. The lockdown brought the market to a standstill in Spain, and this is only one example in Europe, where most markets are suffering from the same measures. Italy, for example, suffered a greater decline year-on-year in March, with its April figures also expected to record a sharp drop.

Sweden, however, took a different approach to the COVID-19 crisis. Flattening the curve of infections, hospital admissions and deaths was the goal, the same as Spain and the rest of Europe, but the measures taken have been completely different. No strict rules, just recommendations; no lockdown, just a few restrictions when there are more than 50 people in the same place. Shops (not only supermarkets) restaurants and schools remain open as well.

As an effect of this policy, car dealerships are also allowed to stay open, as are registration offices. In March, new-car registrations In Sweden reached their highest level this year, while other markets were suffering. As in other countries, Sweden sees a small lag between ordering and registering a new car, so the impact of COVID-19 is not fully reflected in the numbers. We do expect a fall in new-car registrations in the following months but if the situation stays as it is now, the decline will be a smaller one and not comparable to locked-down markets.

Whatever approach a country took to avoid an exponential rise of COVID-19 infections, there will come a time when the number of cases is going down and the situation goes back to what is being called a ‘new normal’.

China is in the situation of having passed the first, and hopefully also last, wave of COVID-19. Accordingly, it has relaunched its car market.

In uncertain situations, there are many opinions around whether the crisis has boosted car sales because of anxiety using public transport and thus risking infection, or reduces sales because of the economic downtrend and the diminished purchasing power of the population. However, looking at the first numbers from the Chinese market, the first positive prospects for European markets begin to appear.

In March, registration figures were on the rise in China, even though the market was not fully open for parts of the month. After drops in January, when the crisis started to spread, and following an 80% crash in February, the market recovered to about 60% of the March 2019 level. This is a strong signal that the market in China is recovering after lockdown, and there is still a demand for vehicles following the crisis.

Looking to China provides some good news for Europe. Factors that will be important once circumstances start to change include not only demand, but also the number of self-registrations, the health of the rental business and the state of the economy that influences fleet sales. Other options will also come to the fore, such as incentive schemes, which are already being discussed by various organisations.