Hydrogen development is the best path for carmakers to invest in if they want to improve their sustainability in the coming years.

With pressure on manufacturers to show their green credentials, many are looking at ways to reduce their carbon footprints and improve on emission output. This research requires substantial investment, so Autovista Group asked readers of its Daily News Brief which area they should be concentrating on. 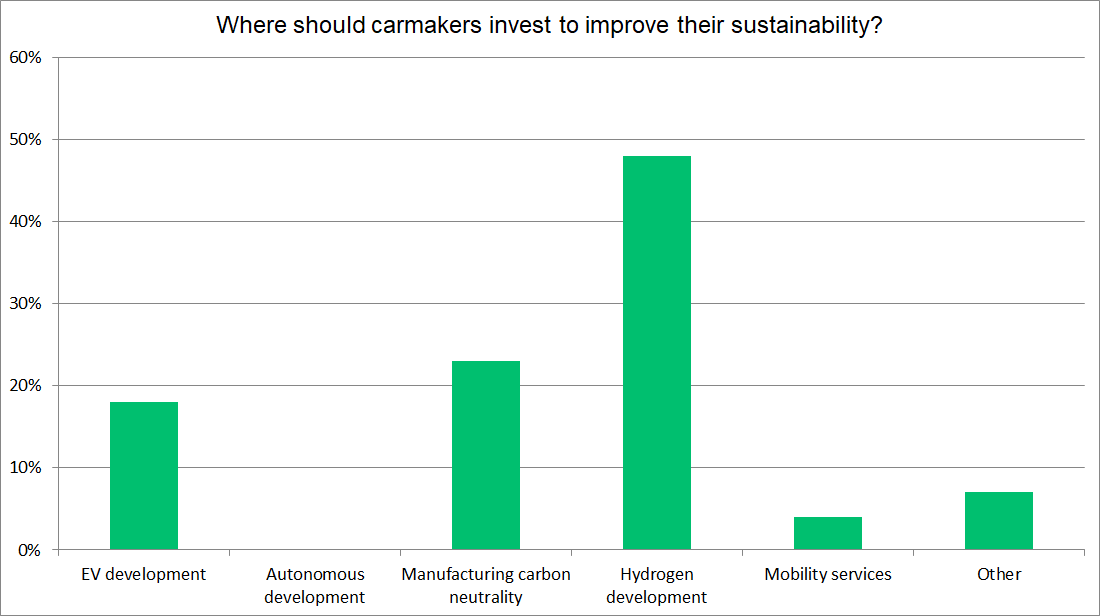 Nearly half (48%) of voters felt the best area to invest for a sustainable future was in fuel cell technology. A hydrogen fuel cell relies on less mined material than a lithium-ion battery, which means carmakers developing the technology will already be cutting down on their overall carbon footprint. In addition, the increased range means less time required for charging from mains supplies, again reducing carbon output.

Companies such as Royal Dutch Shell are developing hydrogen fuel stations, creating and storing the fuel on-site using electricity from renewable sources to split H2O into its component atoms, ready for the fuel to be pumped into cars. The infrastructure is still in its infancy, but companies are starting to realise the benefits of the technology, and the low-carbon opportunities it brings.

Interestingly, less than a fifth (18%) felt that investment in electric vehicle (EV) technology, hydrogen’s more advanced rival, was the way forward for improving sustainability. The ready state of EVs, with development at a higher level, means these cars will bring their zero-emission capabilities to a mass-market sooner, and will certainly take away some of the emission output from conventional engines, reducing average CO2 levels. Looking at the entire production chain, with battery material needing to be mined, then completed batteries having to be shipped (as it is too dangerous to fly with them), the carbon footprint in production is something that needs to be addressed.

But EV technology does cut tailpipe output, and with more and more reliance on renewable energy sources for charging infrastructures, plus the readiness of the technology, it is easy to see why it is the choice of many manufacturers for now to improve their environmental credentials.

Second place in the poll with almost a quarter (23%) of responses was the potential to invest in manufacturing, reducing carbon output across vehicle production and other sites that carmakers may have. This is a move that both Volvo and Volkswagen have announced in recent weeks, looking to offset the output of these plants through various ways and means.

Manufacturing will always create a large carbon footprint. Not only do materials need to be shipped to factories and facilities using road, air and shipping, but also the plants themselves need to generate huge amounts of electricity to power the production process itself. Utilising renewable energy resources and planting trees to offset the CO2 output are all measures that can help, as well as investing in modern technologies that will work efficiently.

Just 4% felt that investing in mobility services was the best way to promote sustainability; the effort would reduce the number of cars produced and in turn the level of vehicles on roads in towns and cities, as drivers move into ride-sharing.

Finally, 7% voted for ‘other’ with the majority of comments suggesting that development of petrol and diesel engines would be the best source of investment, a technology that is already well advanced and could perhaps be tweaked, while supply chains are in place. Kudos to the one respondent who suggested manufacturers should be developing ‘cars made of cabbage,’ – maybe a new version of the Leaf?