Three-speed RVs: How are Europe’s used-car prices emerging from lockdown?

As Europe’s automotive sector emerges from COVID-19 lockdowns, a ‘three-speed’ development of residual values (RVs) is emerging. Senior data journalist Neil King considers why some markets are benefitting from pent-up demand, some have had a rapid reaction to the impact of COVID-19 while others are ‘late starters’ with limited value movements thus far.

Autovista Group has developed a COVID-19 tracker, which follows recent RV developments in 12 European markets. The indexed tracker starts in early February, with a value of 100. In the UK and France, the tracker shows that the index of RVs, compared to early February, has risen since mid-May and peaked at 103.3 (a 3.3% rise) in the UK and 101.4 (a 1.4% rise) in France in the week to 19 July.

The UK is enjoying the release of pent-up demand, both from the lockdown but also from the uncertainty running up to departure from the European Union. The UK is also facing a starker vehicle-supply challenge than any other market, which is filtering through to higher residual values as demand outstrips supply. There is no sign of an incentive scheme in the UK, which could dampen RVs as consumers expect new and, in turn, used-car prices to lower. ‘The end of furlough will drive some change towards the end of the year and with Brexit looming, we believe the worst is still to come next year,’ commented Anthony Machin, head of content and product at Glass’s.

France is also benefitting from pent-up demand and a new incentive scheme that came into effect on 1 June. The €8 billion package includes a €7,000 grant for private buyers of new battery-electric vehicles (BEVs) costing less than €45,000 (€5,000 for fleet buyers), while buyers of new plug-in hybrids (PHEVs) can claim a €2,000 subsidy.

Additionally, France has also doubled its premiums for those looking to trade in older vehicles for a cleaner model, with a €3,000 grant for vehicles with internal combustion engines and €5,000 for BEVs and PHEVs. Crucially, the enhanced trade-in bonus also applies to used cars and hence the notable rise in RVs. This may be short-lived as the scheme is expected to be exhausted after the summer, but it may be extended.

‘France is rising mainly because of the incentives for new and used cars and as delayed purchases were finalised in June. Nonetheless, it seems that with summer vacations, this movement is calming,’ commented Yoann Taitz, operations director of Autovista Group in France.

The surge in used-car transactions was phenomenal; 595,942 used cars changed ownership in France in June, 29.1% more than in June 2019, according to the latest data published by the French carmakers’ association CCFA. It should be noted, however, that this was also supported by two extra working days in June 2020 compared to June 2019 (21 versus 19) and there were still 17.4% fewer used-car transactions in the first six months of 2020 than in the first half of 2019.

Autovista Group anticipates a slowdown in the RV development in France and our latest residual-value outlook calls for prices of used cars to be 0.3% lower in France at the end of 2020 than when the COVID-19 crisis erupted in Europe, in March. Nevertheless, this is the most resilient expectation for all the European markets covered in the July update of Autovista Group’s whitepaper; How will COVID-19 shape used car markets? 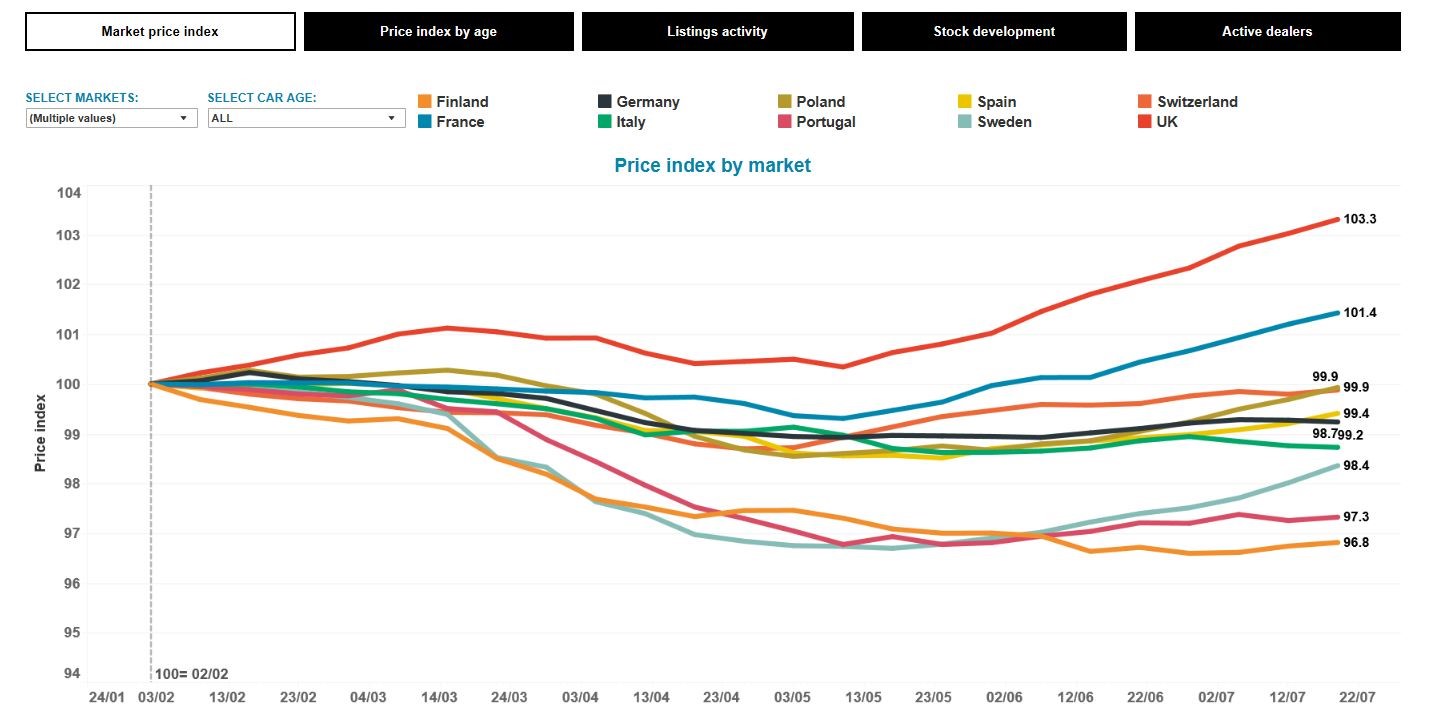 Sweden, Finland and Portugal all had rapid negative reactions to COVID-19 and are at the lower end of RV developments, but for different reasons. Dramatic lockdown measures were not introduced in Sweden and Finland, but Autovista Group’s COVID-19 tracker shows that the index of RVs in Sweden fell from early February to mid-May in both markets due to the overall fear and uncertainty about what would happen.

‘We have seen a drop in new car registrations in Sweden in April (around 30%), May (around 50%) and June (around 20%). And the outlook is that this will not be recovered until the end of the year. However, the used-car market has recovered fine as stocks are decreasing and sales volumes are rising,’ said Johan Trus, chief editor of Autovista Group in Sweden.

‘People are not allowed to travel to other countries, so the summer vacation is spent in the country, and then people need a car to travel. In addition, car exports have picked up,’ added Trus.

In Finland, the index of RVs fell from early February to only 97 in mid-June and has remained at the lowest level in Europe since. ‘Finland is still running on low numbers, and we don’t see the same quick recovery as in Sweden. The import of young used Swedish cars has picked up again and this, in combination with lower used-car values than normal, already before the crisis started, has made us lower the outlook slightly,’ Trus commented.

Portugal has also endured falling residual values since the tracker index started in February but a more pronounced downturn commenced at the end of March. Ass in Finland, the price index is only showing a slight increase and not truly recovering.

‘The first impression we have is that there was a little panic and then there was an attempt to sell cars, or at least secure online contracts, by lowering prices a little. In the previous crisis, however, prices dropped by more than 15%,’ said Joao Areal, editorial manager of Autovista Group in Portugal.

‘After the reopening, there has been an increase in sales of used cars, with a greater incidence in the lower segments. One of the indicators is the increase in car credit in May - up 88% in relation to April – as the lockdown ended on 15 May, but this is still far from the beginning of 2020. As the economy is down, increasing prices to the pre-COVID level will not be easy but we will have to wait for the next few months to see the real impact,’ added Areal.

The rest of Europe’s tracked markets are the ‘late starters’, where several effects are balancing each other out and we still do not see a significant movement in RVs.

The first reason for the current stability is that many markets have essentially been ‘on hold.’ Sales activity resumed later in Spain - very late in May and even June in some cases. In Italy, ‘the market has been waiting for a better understanding of the full impact of the economic crisis, especially considering that many experts are convinced that we could face a second wave and a new lockdown in autumn,’ explained Marco Pasquetti, forecast and data specialist of Autovista Group in Italy.

Italy is now coming under a bit of pressure, however, with RVs falling again since late June. This is partly because of the proposed incentives to support the country’s automotive industry, effective from 1 August. There is also the Ecobonus incentive scheme, but the amount allocated is insufficient in our opinion (so far). We think that we’ll see an impact on values starting from September,’ Pasquetti added.

The significant disruption to new-car supply and registrations has also supported RVs.

‘In many cases, dealers are delivering stock and used cars, as this is their only chance to get a car. They say they are not applying discounts to very young used cars yet, but discounts already exist for new-car sales, ranging from 15% to 40%-45%, depending on the manufacturer and the type of buyer. I think all this activity will have a consequent effect and once the very young used cars have been delivered, we will start seeing RVs drop,’ said Ana Azofra, valuation and insights manager at Autovista Group in Spain.

Switzerland saw the same dramatic decline in new-car sales volumes as elsewhere and so nearly new cars, aged 0-6 months, may have served to fill the gap left by new cars. This would explain why their RVs have seen increases, whereas used cars aged seven to 17 months are losing ground.

‘Dealers and registration offices in Switzerland were never fully closed during the lockdown. There was never an over-stocked used-car parc. This may be one reason for the stable or slightly increasing RVs,’ commented Hans-Peter Annen, head of editorial for Autovista Group in Switzerland.

‘Now that manufacturers have resumed production and all the individual new-car incentives, which we had in the pre-corona phase in Switzerland, have come back and are even increased, this will most likely increase the used-car stock volume and the pressure on the RVs of young used cars,’ Annen concluded.

Meanwhile, there has been a very positive development in Poland. ‘Sales of new passenger cars are growing and are currently at a level of 20% year-on-year. Imports of used cars are returning to the pre-pandemic level. However, we have identified another risk not related to the COVID pandemic. This is the WLTP introduction effect - fast-growing list prices of new passenger cars. This risk is more significant than lockdown for the level of RVs. It may be a reason to decrease RVs in coming months, despite quite good demand for used cars. We expect a clearer view after the holidays,’ commented Marcin Kardas, head of the Autovista Group editorial team in Poland.