New-car registrations in the UK grew 11.3% year-on-year in July, as dealers enjoyed their first full month of trading since February. Nevertheless, the recovery was expected and Autovista Group has maintained its 2020 forecast at a decline of 30%. Senior data journalist Neil King discusses the latest developments and outlook.

The update today (5 August) from the Society of Motor Manufacturers and Traders (SMMT) reports that 174,887 new cars were registered in the UK in July 2020. The 11% growth ‘represents a significant improvement on the same month last year, when declining business and consumer confidence undermined the market,’ said the SMMT.

The association added that ‘pent-up demand and special offers led to a reprieve for the sector,’ but cautioned that new-car registrations were 41.9%, or 598,054 units, lower in the first seven months of 2020 than in 2019.’

The release of pent-up demand generated 20.4% growth in private demand in July as consumers could finally ‘renew their cars after lockdown had forced them to delay,’ according to the SMMT.

‘In addition, manufacturer incentives have helped attract customers to showrooms. Eight of the 10 major manufacturers provided attractive finance offers and flexible payment terms in a bid to head off consumer uncertainty - vital as the coronavirus job retention scheme phases out, potentially sparking redundancies across the economy and impacting confidence to invest in big-ticket purchases,’ the SMMT commented.

‘July’s figures are positive, with a boost from demand pent up from earlier in the year and some attractive offers meaning there are some very good deals to be had. We must be cautious, however, as showrooms have only just fully reopened nationwide and there is still much uncertainty about the future,’ said SMMT chief executive Mike Hawes.

‘By the end of September, we should have a clearer picture of whether or not this is a long-term trend. Although this month’s figures provide hope, the market remains fragile in the face of possible future spikes and localised lockdowns as well as, sadly, probable job losses across the economy. The next few weeks will be crucial in showing whether or not we are on the road to recovery,’ Hawes added. 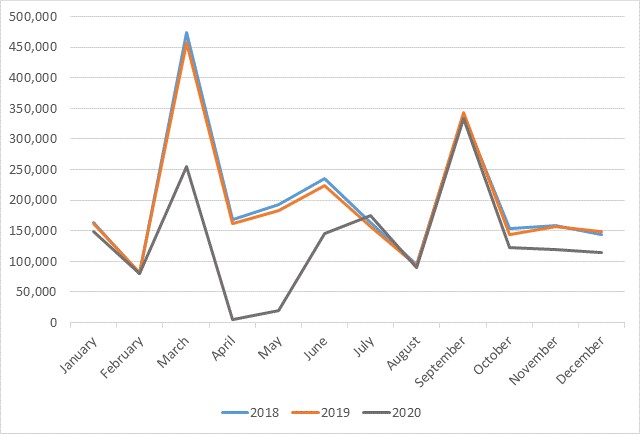 Autovista Group expected the release of pent-up demand after months of disruption and has therefore held its base-case forecast for the UK market, which foresees a 30% contraction in UK new-car registrations in 2020. This is aligned with the SMMT, which has downgraded its outlook for 2020 to a 30% decline in registrations, ‘representing more than £20 billion (€22 billion) of lost sales.’

However, in an upside scenario, disruption to the UK automotive sector will be more short-lived as dealers quickly overcome supply shortages and return to full operational capacity, accompanied by a healthy release of pent-up demand in the coming weeks. A less severe impact on the wider economy would also bolster new-car registrations later in the year. In this scenario, about 400,000 registrations will still be lost but the forecast is for 1.91 million registrations in 2020, down 17.5% on 2019. 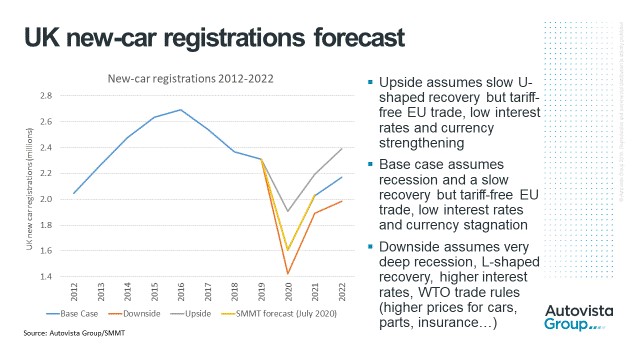 Aside from the dramatic effects of the coronavirus crisis, uncertainty remains surrounding the terms of the UK’s future trading relationship with the EU. Autovista Group’s base-case scenario assumes a deep recession and a slow recovery but ongoing free trade with the EU. In this scenario, the new-car market is forecast to grow 26% and 7% in 2021 and 2022 respectively, returning the market to close to 2.2 million registrations in 2022.

In an upside ‘slow u-shaped recovery’ scenario, the impact of the COVID-19 pandemic in 2020 will be fundamentally recovered in 2021, with registrations growth of 15% anticipated. In conjunction with a trade deal that secures ongoing free trade between the UK and the EU, the new-car market is forecast to grow by a further 9% in 2022. At 2.4 million registrations, the UK new-car market would then be at its highest level since 2018.