Automotive associations in France and Spain have reported declines in their September registrations, while Italy has recorded its first increase of 2020, largely thanks to government-backed incentives finally boosting registration figures. Autovista Group Daily Brief editor Phil Curry assesses the results.

Following the lifting of coronavirus (COVID-19) related lockdowns, the automotive industry in some of Europe’s biggest markets has shown signs of recovery. However, as the year goes on, pent-up demand and incentive schemes are making way for a drop in consumer spending due to economic woes, while a second wave could also impact sales. 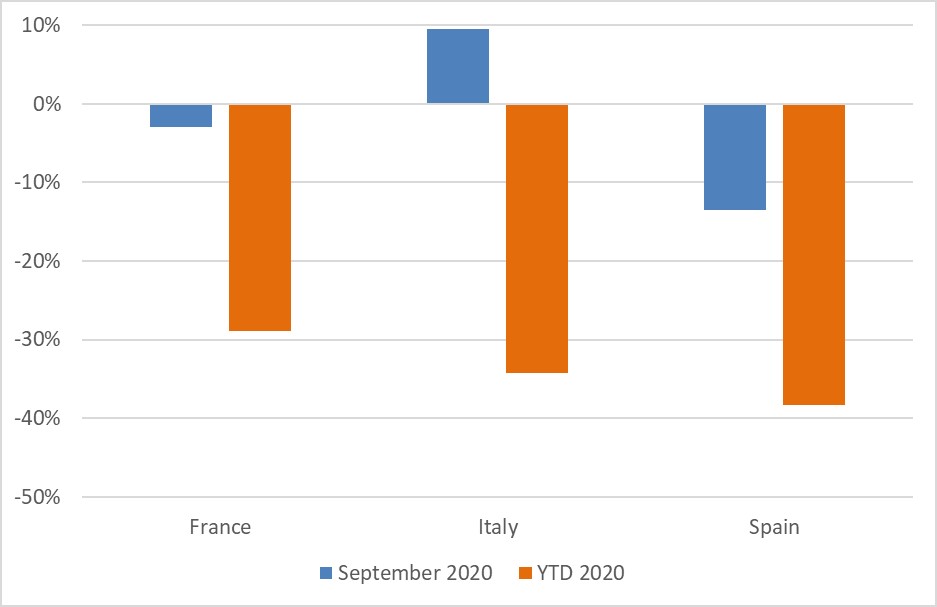 New-car registrations in France fell 3% during September, according to the latest data released by the country’s automotive authority, the CCFA. Taking into account the number of working days in September 2020 compared to the same month last year (22 days compared to 21), this decline increases to 7.4%

Despite positive increases in June and July, thanks to a comprehensive incentive scheme, the removal of financial bonuses, following the cap in the budget being reached, have seen sales drop in the last two months.

Although a 3% decline is an improvement over August results, the market is still 28.9% down year-to-date. Over nine months, registrations stood at 1,166,699 units. The CCFA is forecasting the market as declining by 25-30% over the whole of 2020, amounting to the lowest number of registrations in 15 years.

Spain too logged a decline in registrations, with the market down 13.5% in September, according to the latest data from ANFAC. This is a decrease from August, despite the introduction of an incentive scheme in the country. Just 81,746 units were registered in the month.

Spain was one of the worst-hit markets in Europe, and the country’s government has recently introduced a number of local lockdowns, including the city of Madrid, as COVID-19 cases start to increase again.

While this move may not have impacted heavily on September figures, it highlights the changing situation in Europe, and how the automotive industry may struggle for the rest of the year. The Spanish market is down 38.3% year-to-date, according to the latest figures, with 595,435 registrations.

‘The drop in registrations worsened again in September compared to August,’ explained Noemi Navas, communications director of ANFAC. ‘Sales continue to fall in all channels, and this has a serious impact on employment, industry (because one in four cars manufactured in Spain stays in the country) and society as a whole. Without forgetting, due to its impact, that the renovation of the parc is slowed down and with it, the necessary reduction of CO2 emissions that we have to undertake. The RENOVE Plan [Spain’s incentive scheme] still has sufficient funds to boost sales for the last quarter, and we hope that the evolution of the virus will not slow down the market even more.’

Italy offered an exception to the trend currently being seen in Europe, posting an increase in registrations of 9.5% in September, according to Italian industry association ANFIA. This is likely due to the country’s incentive scheme, which began in August. While sales in that month declined, delivery times would likely have pushed registrations back into September, boosting figures.

The country was the first to go into lockdown, doing so in March of this year. Since these measures were lifted, the Italian automotive market has shown a slow but steady increase in registrations, leading to the increase over the same month last year. This is in contrast to other markets, which have shown rapid increases followed by further declines.

‘The incentives introduced have contributed to this result,’ said Paolo Scudieri, chairman of ANFIA. ‘Funding for the 91-110g/km CO2 vehicle band was quickly exhausted, while those available for the 61-90g/km CO2 bracket will soon be depleted.’

Year-to-date figures show the Italian market is still down 34.2%, with 966,017 passenger cars registered.

The results show a mixed impact of incentive results. In France, the scheme was well received and depleted quickly, leaving the market at the mercy of a drop in consumer spending. 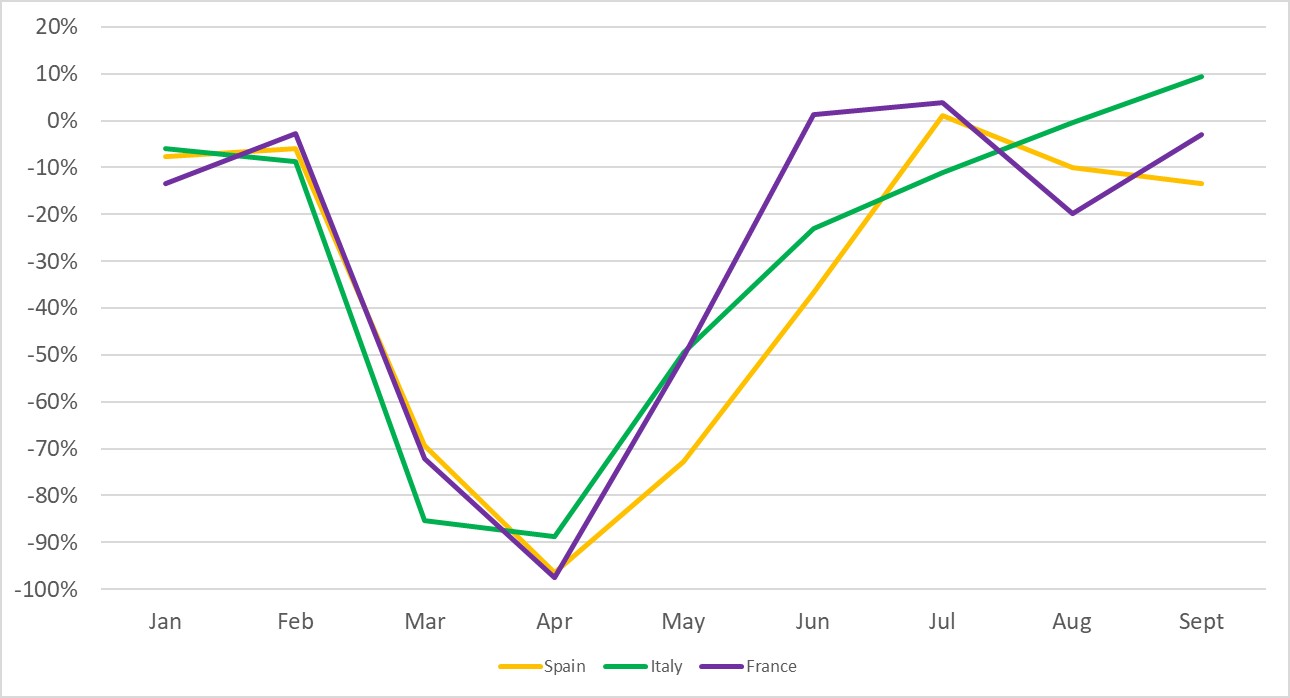 However, in Spain, the RENOVE scheme seems to have passed many buyers by, with funding still available, but a minimal impact on sales. The market saw a 1.1% increase in July, the first month of the MOVES II and RENOVE scheme introduction, but since then has posted declines of 10.1% (August) and now 13.5%. With funding still available, it is clear that consumer demand is the problem in the country. With the implementation of local measures to deal with a second-wave of COVID-19 infections, a further complication to recovery is being added.

‘In September there was a market slowdown,’ said Raúl Morales, communications director of Faconauto. ‘The evolution is not good, but we are still at a registration volume that is better than expected thanks largely to the effect of the RENOVE.

‘Undoubtedly, the worsening of the health situation and a new decline in confidence is already weighing on consumers, who view not only the present but also the future with suspicion. This slowdown was the fear we had, and that leaves us facing a last quarter of the year marked by uncertainty.’