New-car registrations bottom out across Europe in April

The respective automotive trade associations in France, Spain and Italy all report that new-car registrations plunged by more than 80% in April, compared to last year. However, monthly registration figures have bottomed out as dealerships gradually reopen in the three markets. Autovista Group senior data journalist Neil King discusses the latest developments.

With dealers (except for their workshops in some cases) and even registration centres closed, Autovista Group expected registration figures across European markets to be incredibly weak in April. This has certainly materialised in France, Spain and Italy.

New-car registrations were 97.6% lower in Italy in April 2020 than in April 2019, according to data released today (5 May) by ANFIA, the Italian automotive industry association. This dramatic, but understandable, contraction was replicated in France and Spain, where registrations fell by 88.8% and 96.5% respectively according to data published by the CCFA on 1 April and ANFAC yesterday (4 April). 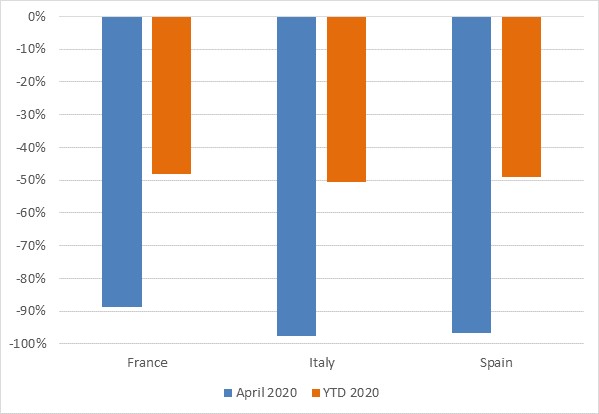 Dealers officially closed in Italy on 12 March. The government decree was initially in force until 14 April but was subsequently extended. Sales activities stopped in France and Spain after their respective governments closed all non-essential businesses on 14 March and dealers remained shut in April. Given this, it comes as no surprise that the volume of registrations across the three markets only amounted to thousands of units in April.

Just 4,163 new cars were registered in Spain in the month, which is the ‘the worst registration figure of the last 20 years’ according to ANFAC. ‘Never in the recent history of vehicle sales in the country has there been such a low number of sales of passenger cars, but neither has there been a humanitarian and social crisis throughout the 21st century on the scale of the coronavirus pandemic,’ the association added.

There is now light at the end of the tunnel with dealerships able to reopen during the month of May as all three countries emerge from lockdown. New-car registrations have therefore bottomed out and will now enter a recovery phase.

‘In Italy, dealerships have reopened today [4 May], with both sales and service departments fully working,’ commented Stefano Ferruzzi, country manager of Autovista Group in Italy. ‘Clearly they have to stick to the Government rules in respect of social distancing but finally they are at work,’ Ferruzzi added.

Yoann Taitz, operations director of Autovista Group in France, confirmed that ‘dealership workshops have remained open in France for some categories of people and in some cases, manufacturers can deliver ordered cars directly to customers’ homes or to dealerships – on the condition that strict measures are respected. But as of next Monday (11 May), all the dealers will reopen for everybody.’

The situation is rather more confusing in Spain, where there is a phased approach to relaxing lockdown measures. These phases are also not applied nationally or regionally but at a county and island level. During the first phase (phase 0), dealers can reopen if they are smaller than 400 square metres and have already implemented new health and safety protocols. However, they can only receive clients with appointments.

‘The main barrier is that you are only allowed to go to a dealer if the dealer is less than one kilometre from your home and you cannot travel there by car or public transport,’ commented Ana Azofra, valuations and insights manager of Autovista Group in Spain.

In the next phase (phase 1), all dealers will be able to reopen as long - as they adhere to the health and safety protocols - and mobility will be permitted within the county too.

‘Most counties are now in phase 0. Some islands are already in phase 1 but there are hardly any dealers there. Phase 1 will start in most counties on 11 May,’ Azofra said.

The reopening of dealerships in Spain will ‘allow more deliveries to be recorded in May, although sales will not begin to recover until after the summer and always with lower figures than those registered in 2019,’ cautioned Noemi Navas, ANFAC’s director of communications, in a statement published by the association.

Raúl Morales, communications director of the Spanish dealer association Faconauto, added that ‘the opening of dealerships on 11 May will reactivate the sector again, but we expect a very slow evolution of registrations, which we cannot afford, because we know the impact that low car sales have on the economy, employment or consumer confidence. We have to reactivate demand from the start and the sector will do its part, but this exceptional situation requires a boost from the Administration.’

ANFAC and Faconauto have downgraded their new-car market forecast for 2020. According to the consensus estimate between the two associations, registrations will fall between 40% and 45% for the whole of this year, with volumes close to 700,000 units. This is close to the lowest level recorded in the wake of the global financial crisis.

‘This scenario already takes into account a two-month period of alarm and confinement, with a progressive de-escalation from the month of May, and a fall in GDP of between 5% and 6%. The first two quarters after the end of the state of alarm will be tough in terms of vehicle sales, due to the exponential increase in economic uncertainty among consumers, with a tendency to improve slowly starting in the summer,’ ANFAC said in the statement published on 30 April.

‘We will see how registrations approach 700,000 units this year, which would also be the worst in the last twenty years, if we don't take action now,’ Morales added.

The forecast for new-car registrations in France is not much better. Autoactu.com reports that a new study by C-Ways sees a 10% contraction in GDP in 2020 ‘becoming credible’, leading to a 30% decline in the new-car market. At the end of March, C-Ways had forecast that the most likely hypothesis was for a 7% drop in GDP and a 22% fall in new-car registrations.

Calls were already mounting for a series of scrappage schemes across Europe once the coronavirus pandemic has receded enough to allow vehicle sales to resume. In the context of these poor forecasts, the pressure on governments will inevitably increase.