Andreas Geilenbrügge, head of valuations and insights at Schwacke, considers the rising demand for SUVs and the implications for residual values.

There is something mystical about the design of sports-utility vehicles (SUVs). Initially, the American combination of ‘sports’ (on the other side of the Atlantic, the generic term for all sporting activities) and ‘utility’ (utility vehicles) was intended to demonstrate a chic combination of leisure activity and utility value. The idea was to set themselves apart from the purely utility-oriented rustic charm of off-road vehicles. In the meantime, it has become an increasingly used term worldwide, which ultimately seems to mean only one thing for sure: higher ground clearance.

For some, SUVs stand for unnecessary size and weight - an environmental sin. For others, they are the holy grail in terms of status symbols, with comfortable entry and an increased feeling of safety. Today, more than half of all German SUV customers do without four-wheel drive, which used to be the norm for almost 90%, leaving most models with only their visual outdoor appearance. Some models, not only in the small segments, are even offered exclusively with only one driven axle. Ultimately, SUVs have steadily taken more market share from their siblings in classic body styles, and there is no end in sight.

Since the beginning, the attractiveness of SUVs has been reflected in higher residual values (RVs), both in absolute and relative terms, compared to their siblings. This is despite the fact that registrations have doubled in Germany since 2012, and even quadrupled compared to 2007. Following the current trend of SUV coupés - still four-door models despite the extended name - premium manufacturers are now waiting in the wings to add small-car crossovers to their ranges in the future. The question that legitimately arises is how long this can continue in a volume-driven and saturated used-car market. So, what can be expected with steadily growing volumes in terms of the high RVs?

A reassuring answer in advance: nothing will change any time soon concerning the advantageous sales prices and rising volumes of SUVs. However, RVs of the high-riding vehicles, which have been so accustomed to success, have not been stable for a while now. They are enduring crises and downturns like the rest of the market (Figure 1).

An important influencing factor here, besides the increased volumes of SUVs, is the competition among themselves. According to IHS Markit, there were around 70 models on offer in 2010, with an average of 4,700 registrations per model. By 2019, this had risen to nearly 130 models, with almost 10,000 registrations per model. However, the new-car market is starting to tilt. Additional market entries are increasingly creating a distribution struggle. Average registrations per model are declining significantly, and the share of models with less than 2,000 units per year is forecast to rise from 14% in 2010 to 44% in 2027 (Figure 2). 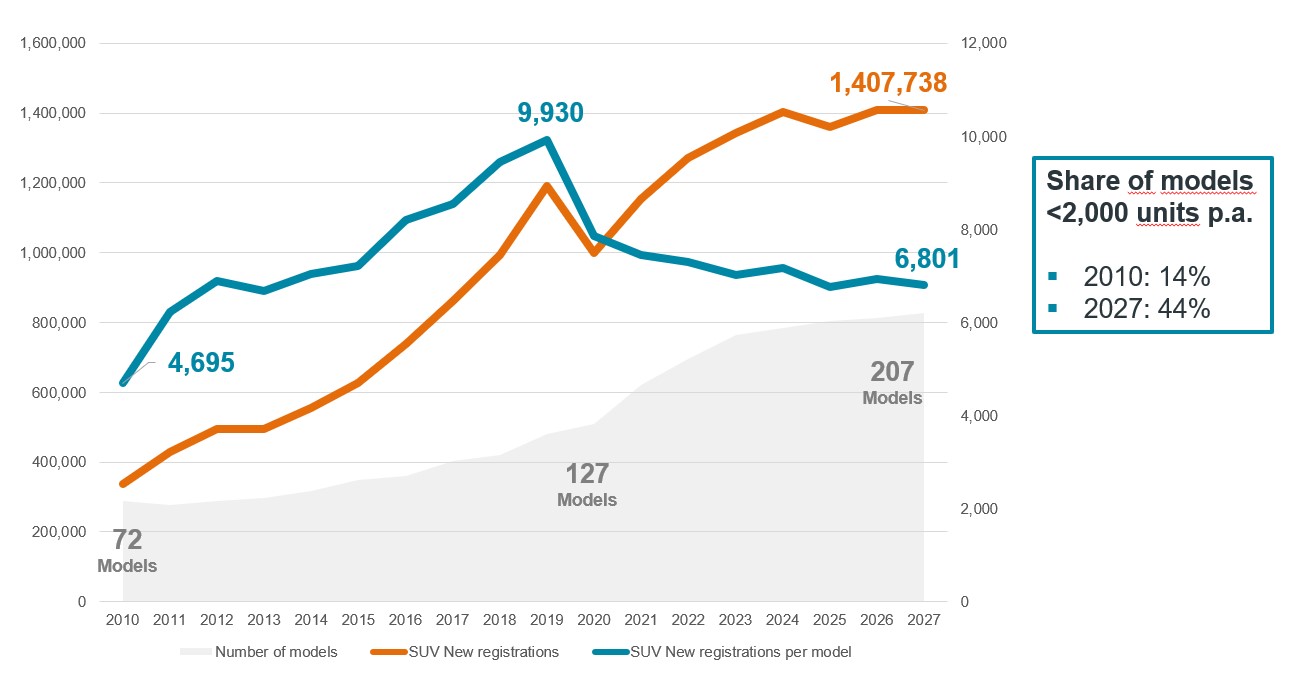 The time horizon is still relatively far in the distance, especially since the second-hand market is always a few years behind. Nevertheless, it is worth preparing for. In times of growing competition, differentiation is key. Optics and brand-image cultivation are certainly important instruments, and electrification is an additional playing field.

However, as a used car, equipment geared to future needs can contribute to value retention and differentiation from the competition. First and foremost, in order not to fall into a fight for the lowest price and follow a downward spiral. After all, the cake will be big enough, just the individual slices need to be filling and tasty.

The original article can be found in German on the Schwacke website here.