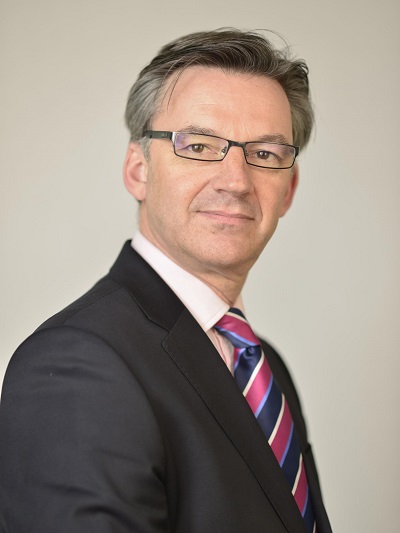 With the UK’s automotive industry in a state of flux thanks to domestic and worldwide uncertainties, Phil Curry caught up with SMMT chief executive Mike Hawes to discuss the market and the challenges it faces.

Catching up with Mike Hawes on the sidelines of the SMMT Meet the Buyer event, held within Automechanika Birmingham, there was a lot to talk about following our previous conversation 12 months ago.

We spoke on the day that new car registrations for May were released, showing sales falling by 4.6% year-on-year and diesel dropping by 18.3%, continuing its downward decline.

‘The market was down, but we are still projecting 2.3 million vehicle sales in 2019, and that’s not bad,’ he tells me when I ask about the latest figures. ‘Sales were down by the same amount in April as they were in May, but the industry is being hit by so many factors at the moment, so in relation, the performance is not bad. It is difficult to forecast, and we don’t know what the impact of October and the UK withdrawal from the EU will be.’

The factors Mike alludes to include Brexit, as well as the fall in diesel confidence, economic and political uncertainties and troubles in markets outside the EU.

‘Diesel sales are declining, but May showed that this rate of decline is now slowing,’ he adds. ‘What we must remember is that modern diesels, Euro 6 onwards, are cleaner than their counterparts. Numbers of AFVs [alternative fuel vehicles] are increasing, and that is encouraging.’

‘A number of cities are going to be charging diesels for coming into their territories in the UK. However, Euro 6 models are exempt from this. It will only be a matter of time before drivers become aware of this. Newer engines are cleaner, and at some point, this will be realised. The drop in diesel is pushing CO2 levels up too.’

I wanted to ask about consumer confidence in diesel, with used sales of the fuel type also falling in Q1 this year.

‘The used market often follows the new registrations, but the smaller decline in diesel requirements last year does perhaps show that appetite for the technology is still warranted,’ Mike tells me. ‘It is possibly down to the lower rates of tax on older diesels, but we do expect more declines for the technology as years go on.’

The UK has also seen production fall since the Brexit decision was announced in 2016. During April, manufacturing figures collapsed as unnecessary shutdowns for Brexit took place.

‘Of course, production was down in April, largely down to Brexit-related shutdowns. These are planned and scheduled six months in advance and are not something that can be overturned overnight. However, we do not believe that this will completely level out in August, when shutdowns took place last year, due to various circumstances. It all depends on demand, and as we can see, vehicle demand around the world is down. Manufacturers will only produce the cars they are going to sell. So while the drop in April was large, the industry will recover, albeit not levelling out later this year,’ Mike tells me.

With Brexit, investment in UK automotive has also fallen. Carmakers do not want to put money into plants and other projects in the country while the uncertainty over what type of Brexit will occur remains.

‘Investment has stalled in the UK at the moment, in production at least,’ I am told. ‘We will lose Honda in 2021, while Nissan’s pulling the production of the X-Trail is just a lost opportunity, and has had no impact on current investment. [On the subject of Ellesmere Port] Tavares [PSA CEO] has also indicated that he will not make a decision on the future of the plant until after Brexit.’

‘Manufacturers will not invest if they are not going to see returns. What we need is a sustained period of investment, which will boost plant efficiencies. We do see production investment every generation cycle but to boost confidence, we need to see more. With the current uncertainties, however, it is perhaps understandable, if unfortunate, the current position that we are in.’

Our discussion then moves on to new fuels, especially electric vehicles (EVs), which a number of manufacturers are pursuing.

‘Manufacturers have always been going down the EV route, so the implication of CO2 targets has helped this along,’ Mike says.

However, there has been an impact caused by the Government removing incentives for plug-in hybrids (PHEVs). I wanted to find out what Mike’s views were on this.

‘The PHEV incentive withdrawal has hurt the industry, but we need more stability on incentives in other low and zero emission areas,’ he tells me. ‘Germany has a programme in place until 2030 while France has double the incentive size that the UK has. Britain wants to be a leader in electric technology, but we need to be able to back up these claims.

‘We knew the impact that the loss of the PHEV incentive would have, we’ve seen it in Norway, and Denmark, so it is no surprise that the market for these cars has dropped since the decision was made.’

Whether the UK is part of the EU or not by 2021, the country will still look to adopt the CO2 targets set by the European Parliament. This is pushing EV development further, and I asked how this was penalising carmakers.

‘But what governments and Europe needs is for carmakers to be profitable, in order to be able to afford research and development of electric, hybrid, PHEV, hydrogen and any other potential low and zero-emission fuels. By fining them for being over targets, they are not helping in the push to greener driving.’

Finally, we get around to Brexit. Since we spoke last year, the original deadline for leaving the EU has passed, the withdrawal agreement has been voted out numerous times, and now the country is expecting a new leader, and with that, potential new philosophies over what type of Brexit may occur.

‘A no-deal Brexit must be off the table, and we have made our position clear on that,’ says Mike. At one point it looked unlikely that it would be the road we end up going down, but recent events have put this back on the table.’

On the subject of potential tariffs, Mike continues: ‘It is no good saying that we are protected by WTO rules, and therefore no deal is not as damaging. If countries thought that WTO was the best option, there would be no trade deals struck. The UK automotive industry relies on frictionless trade, and we are working hard to promote these needs to Government.’

Finally, I ask about what the SMMT will do once a new Prime Minister is appointed.

‘Of course, we are watching the leadership challengers, some are adamant that no deal is the only option, others are more approachable over the prospects of a deal of some sort,’ he concludes. ‘I wouldn’t say we start afresh when a new regime comes in, but we will be sure to speak with MPs and Cabinet members to champion the needs of the industry.’