The signs pointed to strong growth in battery-electric vehicles (BEVs) and plug-in hybrids (PHEVs) in Austria during 2020, writes Robert Madas, valuations and insights manager for Austria and Switzerland at Autovista Group’s Eurotax.

Manufacturers' model offensives, further development of the charging infrastructure, political measures, and increasing interest on the part of consumers were expected to lead to a noticeable increase in the market share of electrically-chargeable vehicles (EVs) this year, prior to the coronavirus (COVID-19) pandemic.

Initial trends in new-car registrations in January and February confirmed this forecast. The substantial market contraction of 10% was exclusively at the expense of petrol and diesel cars. In particular, demand for petrol cars fell by 5,855 units to a market share of 47.2% (January-February 2019: 54.5%). In contrast, BEVs increased by almost 40% to 1,676 units compared to January-February 2019, gaining a market share of 3.8% in the first two months. PHEVs grew by 269% to 910 units, a 2.1% share. If these two types of vehicle are considered together, they accounted for a total of 2,586 units, or 5.9% of the market in the first two months. Compared to the same period last year (1,536 units or 3.1% share), this is a significant increase.

However, the commercial share of new registrations of electric vehicles, at around 75%, remains significantly higher than for conventional fuel types. It remains to be seen how many of the electric vehicles registered turn out to be tactical registrations and resurface on the used-car market in the coming months. Nevertheless, the results for the months prior to the COVID-19 crisis show a clear trend towards electrification, albeit still at a low level.

Since mid-March, everything has changed: the automotive sector has come to a standstill by decree, the authorities only carry out registrations in exceptional cases and almost all car plants in the EU have stopped production for now. Closures of supplier companies will only push back the already delayed delivery of new electric models even further.

The momentum in registrations of new EVs is heavily dependent on the availability of attractive models, as seen in 2019. The growth compared with 2018 corresponds almost exactly with the registrations of the Tesla Model 3 (2,342 units).

Registrations of new battery-electric vehicles in Austria, 2017 to 2019 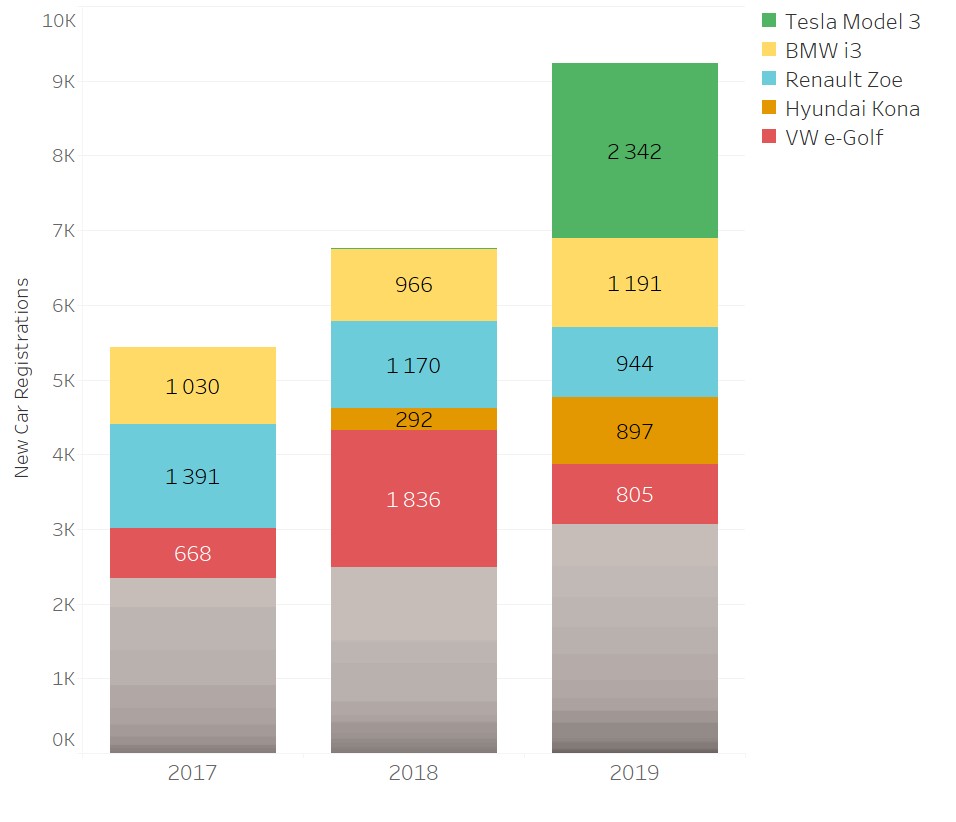 If upcoming models such as VW’s ID.3, which is intended to appeal to the wider masses as a ‘people's electric car’, are delayed in rolling off the production line this year, a dent in the growth of EVs can also be expected. A slump in new-car demand, caused by the COVID-19 crisis, is already becoming apparent. In March, new-car registrations in Austria fell by about two-thirds compared to last year, down to 10,715 units, according to preliminary figures released by Statistik Austria. This is closely in line with the significant downturns suffered in France and Spain in March.

How sustained the slump in demand caused by COVID-19 will be, which segments and fuel types will be affected and to what extent, is guesswork. One possible scenario is that the crisis will have a significantly lower impact on buyers who can afford the comparatively high acquisition costs of EVs. In a shrinking new-car market, this could lead to even higher increases in the market share of electric vehicles.

The original article can be found in German on the Eurotax Austria website here.