A total ban on all traditional combustion engine cars in cities is the only way to curb rising air pollution, according to the findings of the latest Autovista Group survey.

Cities across Europe are exploring ways to combat pollution. While many of them are banning older diesel engines, readers of the Autovista Group Daily Brief felt at pollution was the result of both diesel and petrol vehicles, with 37% supporting restrictions on both types of engines.

Diesel vehicles have been demonised in the media with local authorities pinning their problems on older technology and governments shunning new technology and increasing taxes. While older diesels emit higher levels of nitrogen oxides (NOx), which is harmful to health, although Euro 5 engines started to combat this with the addition of diesel particulate filters (DPFs) as standard and newer Euro 6 engines are relatively clean.

However, the slowdown in sales of diesel vehicles has highlighted the problem of CO2, with rising levels in Europe coinciding with diesel sales falling. Therefore it is increasingly clear that to reduce air pollution, diesel bans alone are not enough. The survey results reflect this, with just 7% believing a diesel-only ban would be enough for cities to improve their environmental credentials.

A ban on petrol and diesel vehicles would see hybrid, plug-in hybrid (PHEV), battery electric vehicles (BEVs) and fuel cell vehicles (FCEVs) the only vehicles on roads. This would also require conversion of public transport, such as taxis and buses, to cleaner technologies. 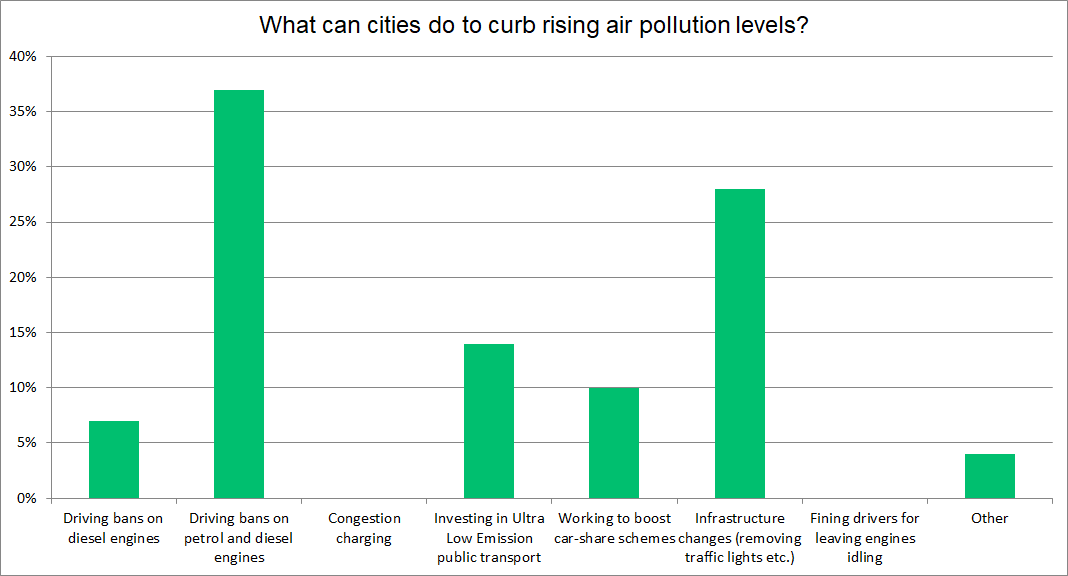 The onus should also be on city authorities to ensure that congestion is reduced so that time spent on the road is reduced and engines are not idling for long. For this, infrastructure changes are required, a move that 28% of voters agreed with.

Removing traffic lights would ensure more free-flowing traffic, which would reduce air pollution. For this, cities would need to conduct studies and alter traffic flow to ensure that such removals would not cause further congestion, effectively removing the benefits of such a move. Studies would also cost money, perhaps a reason why local authorities are focusing on other methods of reducing pollution.

As mentioned above, any ban on petrol and diesel vehicles would require the upgrading of public transport fleets to hybrid, electric or hydrogen power. A total of 14% agreed that this should be the main course of action for cities anyway, as time spent moving and idling in some of the most polluted areas of cities is a big contributor.

To prove this, during a bus driver strike in London during 2015, Oxford Street, one of the most polluted places in the city, saw a dramatic improvement in air quality, according to the London Air Quality Network.

Cities are already looking to upgrade their networks. The company behind London’s iconic black cabs has rebranded as the London Electric Vehicle Company (LEVC) and is focusing on supplying its new electric vehicle into Europe.

Car-share schemes would also help reduce air pollution, with 10% believing more should be done to encourage drivers into such programmes. This would reduce the number of cars on the road, removing pollution from the concentration of vehicles and encouraging a reduction in congestion.

A move to autonomous car-sharing would also benefit congestion, with programmed routes, and intelligent systems able to react and plan journeys more efficiently. Such technology could also reduce accidents, again a cause of congestion, and one over which authorities have no control.

Finally, 4% of respondents opted for ‘other’. While many said there was nothing cities could, or should, do, others suggested restricting the number of parking spaces in cities to encourage drivers into public transport. There were also suggestions of increasing BEV charging locations, again to encourage drivers to think differently.