Norway will remain as a leader in electric vehicle (EV) sales in the next ten years, according to the results of the most recent Autovista poll.

The country is currently leading the way in European sales of EVs. However, Germany has closed up with its own market as manufacturers push development of the technology, while Italy has ambitious plans and the UK and France both have new legislation that aims to rid their roads of traditional engines.

In the latest survey for readers of the Daily News Brief, Autovista Group asked which country would lead the way in EV sales by 2028. A total of 47% of respondents suggested that Norway would keep its crown as leader of the EV revolution. The country has incentivised itself into a corner, with recent plans to tax electric vehicle dropped due to decreases in sales. The country wants to naturally phase out petrol and diesel vehicles from 2025, and as long as budgets allow, this could see it stave off competition from other countries and remain a market leader. 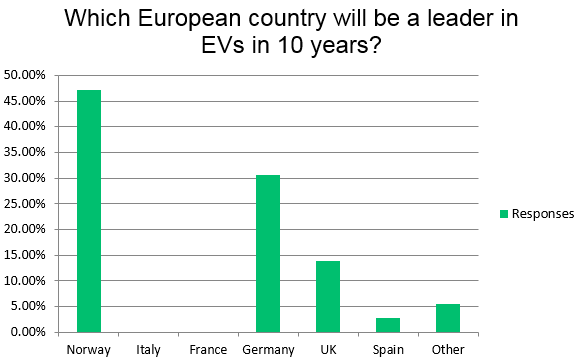 Almost a third (31%) of those answering the poll predicted that Germany would lead the way. With Volkswagen (VW) investing up to €70 billion in EV development, Audi and Porsche working on shared platforms, Daimler developing its EQ range and making Smart an EV-only brand and BMW continuing to add to its ‘i’ range, the country is on target to shake off its dependency on diesel and embrace the new technology. Bans on diesel in certain cities may also help sales. However, Germany’s government remains behind diesel technology for the time being, with no plans to bring an enforcement action on sales, such as the UK and France have done.

14% suggested that the UK would become a market leader in EVs by 2028, with the country preparing its ban on traditional petrol and diesel vehicles for 2040. However, this legislation is still yet to be fully announced, but with investment in the charging infrastructure, especially following the recent purchase of Chargemaster by oil company BP, consumers may be switched on to the technology.

Spain drew 3% of the vote, while France, with its own 2040 legislation, and Italy, aiming for one million EV sales by 2025, both failed to garner a single vote and ended on 0%. The final 5% of respondents suggested other countries, such as Denmark and the Netherlands, might lead the way in ten years’ time.