Since September 2017, OEMs must test and publish consumption and emissions results for new type approved vehicles according to the Worldwide Harmonised Light Vehicle Test Procedure (WLTP). At Autovista Group, we are just beginning to see WLTP results in data feeds and from national registration authorities. While we may not be able to draw conclusions for the entire market just from this early data, it is clear already there are winners and losers.

The NEDC regulation is gradually being phased out with WLTP becoming mandatory for all passenger vehicles from September 2018. Crucially, WLTP requires that each vehicle receive unique consumption and emissions data based on its final configuration, accounting for the impact of options.

In early data, we have calculated increases in CO2 from NEDC to WLTP of 25%, with a range of 4% to 34% depending on vehicle. This is higher than the predicted overall ratio of 19%, but is from a sample of 1000 registered vehicles from just six manufacturers, and includes the impact of options. The table below shows the minimum, average and maximum increase from NEDC to WLTP for the six brands. 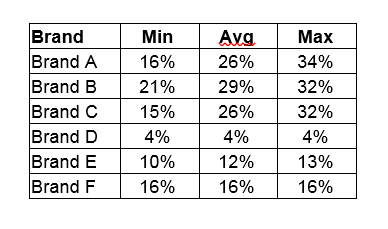 From our early assessment, we can see that the influence of multiple heavy options is affecting emissions very negatively in some cases. This will certainly lead to increases in taxation, especially where vehicles are near the edge of a threshold for a substantial increase.

Each country must also adapt its registration and taxation regimes to use WLTP figures. Germany is among the first countries to do this, requiring WLTP figures be used for taxation from September 2018. The tax impact in Germany is minimal as the CO2-based taxes are small, but other higher tax markets such as Spain and France will implement shortly after, making a smooth rollout critical.

As the final WLTP regulation was delayed and published only in the middle of last year, manufactures and industry in general are struggling to ready themselves for the potential impact on the market. The considerable testing burden remains a problem, and the systems and IT changes required to ensure accurate WLTP data can be published are challenging OEMs, data providers and the fleet industry.

Manufacturers that do have WLTP results are unsure whether publishing them now is in the best interest of consumers, as the lack of information for the public from the European Union or national regulators means that most car buyers are unaware of the differences between WLTP and NEDC, or when it will make a difference to the vehicle taxes. Moreover, if consumers mix the two types of test figure when making purchasing decisions, they could be led to buy a less efficient and more polluting car in error. We expect that once some major manufacturers publish, the rest of the industry will follow.