Although residual values measured as a percentage of original list price have been broadly stable or rising across the Big 5 markets in Europe, the value retention of petrol cars is growing at a faster pace than for diesels. The chart below highlights this point, illustrating the narrowing gap in percentage point terms between the values of diesel and petrol cars as a percentage of their original list price after a standard cycle of 36 months and 90,000 kilometres. 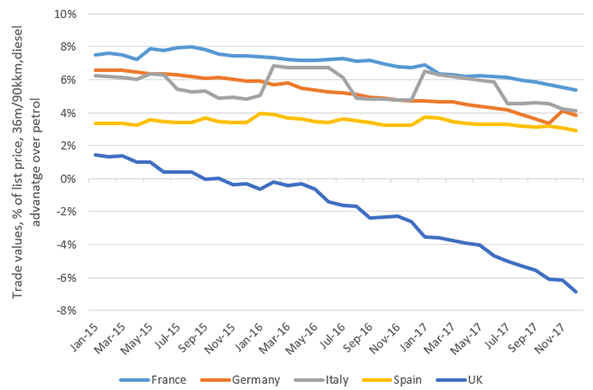 As with the declining diesel share of new car registrations, the residual value performance of diesels in the Big 5 West European markets was already weakening compared to petrol cars in most markets by the time the Volkswagen Dieselgate scandal erupted. However, the narrowing of the gap in performance has accelerated since as the reputation of diesels has been damaged by media coverage and regulatory changes. The narrowing residual value gap is understandably more notable in the markets where pressure on diesels has particularly mounted, namely the UK, France and Germany.

Residual values of diesels have proven most resilient in Spain. As in Italy, the gap between the average residual values for petrol and diesel cars has shown comparatively little change compared to the UK, France and Germany. The decline in the diesel share of the new car market is not yet mirrored in residual value performance as supply still remains constrained, even for diesels, after years of poor new car sales. However, the gap in the average value retention between diesel and petrol cars in Spain has been at the lowest level since August 2017 than at any point since April 2015.

The UK is the starkest example of the poor residual value performance of diesels, with petrol cars on average already retaining more of their value than diesels by the time of the Dieselgate scandal in September 2015. The latest valuations from Glass’s, the UK division of Autovista Group, reveal that petrol-driven cars widened the gap with diesel to seven percentage points in December, achieving 45% and 38% respectively of original list price after 3 years and 90,000 kilometres.

Overall, residual values continue to climb gently as a percentage of their original list price in France, although growth for diesels has been more modest than for petrol. Back at the start of 2015 for example, used diesels were achieving 41% of their list price compared to just 33% for petrol-driven cars after 36 months and 90,000km. However, the latest unweighted average residual value data reveal that petrol car value retention has climbed four percentage points to 37% whereas diesels have only gained two percentage points to 43%. Consequently, the gap between diesel and petrol cars in France has narrowed from an average of eight percentage points in 2015 to six in 2017.