It has been a turbulent twelve months for the European diesel market, yet while sales continue to fall, there is no immediate successor to the technology, with its long-running rival petrol picking up the sales.

Diesel vehicles produce nitrogen oxide (NOx) which is harmful to health. However, they produce little CO2, which has always been seen as a benefit to the technology alongside increased fuel efficiency. The only technologies that can offer reduced CO2 and NOx are hybrid and electric vehicles, as well as hydrogen-powered cars.

But these technologies are still in their infancies. Manufacturers are rushing to develop them, especially electric vehicles. They may be some way off, but what impact are they likely to make in ten-years’ time?

Autovista Group’s latest survey asked readers of the Daily News Brief what they thought would be the dominant fuel type in Europe by 2028. A clear winner was hybrid power – including plug-in hybrid electric vehicles (PHEVs) with 53% of respondents believing this would become a market leader over the next decade. The technology is more advanced than pure electric, however, many mainstream manufacturers are just adding it to their model options. 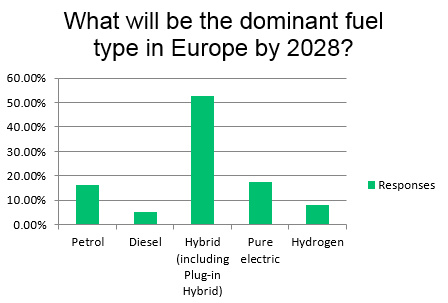 Surprisingly, it was close between petrol and electric vehicles. 18% believed most Europeans would be driving electric vehicles (EVs) by 2028, with 16% believing that the current market-leading technology, the internal combustion engine powered by petrol, would remain in the top spot by this time. There are concerns that EVs need more major development to achieve any form of parity with traditional engines, including increased range, faster charging times and lower sales prices. The results of this poll suggest that while many do still think it would be a market leader in the next decade, it has much to do to take away from hybrid power.

Petrol meanwhile, is the safe choice, the current leading technology and one which offers range and good sales cost. Putting it into third in this poll, however, shows how the market could change by 2028. Countries such as France and the UK are banning their sale by 2040, together with diesel, while Norway intends to phase them out by 2025.

In fourth place was hydrogen, the youngest technology on the list, with 8% of respondents believing it would lead Europe. Hydrogen offers the benefits of an electric vehicle together with the range of a petrol or diesel car. Yet manufacturers are focusing on electric power, and its development curve is slow, with only Daimler, Hyundai and Toyota championing it, although manufacturers have agreed a plan to bring the fuel to market. Last on the list was diesel, which despite the current market conditions, garnered favour from 5% of respondents, showing the once dominant fuel’s fall from grace.