Automotive technology is advancing at a rapid pace. Manufacturers are dovetailing their move into electric vehicles with autonomous driving programs in an appeal to capture a leading share of a future market.

In some instances, these two projects go hand-in-hand. Jaguar Land Rover recently announced a deal with Waymo to provide its electric Jaguar I-Pace for self-driving trials of the ride-share scheme, while Volvo announced a similar deal with Uber in 2017.

However, recent events have cast a shadow over the technology, while manufacturers are finding it difficult to convince the public to switch to driverless technology. With this in mind, Autovista Group asked subscribers of the Daily News Brief if they would be happy to use an autonomous car to get from A-B. 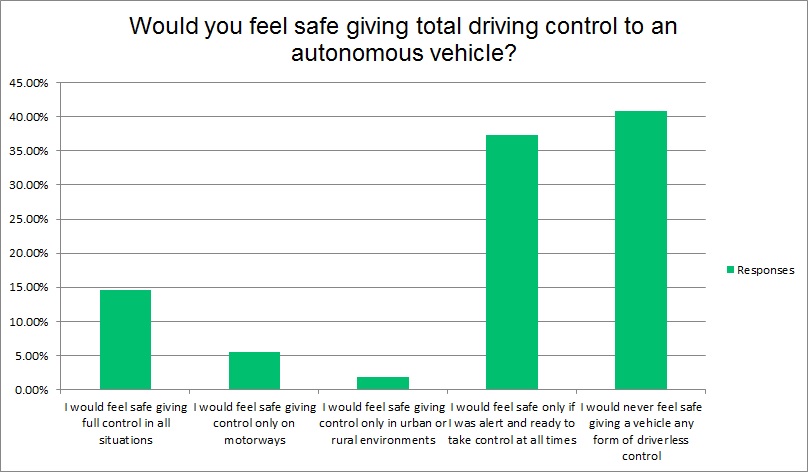 The results suggest that convincing the public that autonomous technology, fully driverless, hands off and full vehicle control, is going to be a hard task to achieve. 41% of respondents to our survey said they would not be happy to give full control over to a vehicle, while 37% said they would, only if they remained alert and aware of taking back control at any time. This suggests that 78% of the public would only be happy with autonomous levels 1-3.

Level 3 technology is the last point before hands-off, non-aware drivers. Many manufacturers are looking to skip this step in the technology. However, Audi has embraced it, with their new A8 model featuring driver-aware autonomous technology, which according to our survey results will give drivers the options they want from a driverless car.

It is clear that the public prefers normal driving controls at present, with an awareness of what is going on around them a key aspect of driving together with questions surrounding safety. However, level 4 and 5 technology is still very much in its infancy, with trials on public roads still taking place. Therefore, as more results come forward from these global trials, opinions may change.